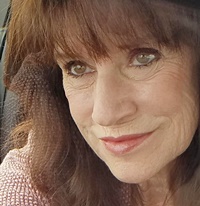 A Column of Smoke

ghosted west to the sea
and I missed my off ramp

like most of the others
who prayed to the fire gods

oh please, not me,
and I saw from a distance

the mean residue
of burnt chaparral and

of suburban tribes
who fled with heads down

from their choked memories
and the burnt-out ends

of their west coast lives
that were hidden in rivers

in my chilled Chardonnay
and thanked god this time

I got off scot-free.

I Dreamed the Pandemic Was Purged

when a storm surged for days off the Mexican Coast
and finally breached California shores
Old Testament style and flushed our streets
with epic amounts of spring clean rain.
In the morning epidemiologists
reported the virus was last seen
in filmy rivers jumping the curbs
in San Diego. Oceanographers
are saying this event makes history
since it seems the virus was scoured
off the street as if it were grease and guttered
down through storm drains and culverts,
beyond nursing homes and airports and
people panic-buying toilet paper
in case of sudden outbreak of indecency.
Then the viscous infusion floated
on high sea swells and coated them with
an enormous oily rainbow just before
ghosting into a grave the experts are sure exists
on the ocean floor. They speculate
that decades later it could be exposed
on the beach by the haunted remains
of the hotel that burned in 1885
like a new local myth, but with the sick
mechanical smell of beach tar.
They also predict that in 2320
someone might point with its left frontal lobe
and say: Look, just above that ribbon
of Del Mar sandstone there on the cliff,
that streaked black sediment—do you see?
That was the Pandemic of 2020.

Things That Fill the Air

some of my breath, some of yours
his last breath and later hers

your whispered words, a choir’s song
the droplets that are passed along

voices of divinity, a fracture in the galaxy
a mother’s plea ayúdame

Gift of a Sparrow’s Nest

It’s like a present found under the tree
when everyone’s sound asleep
on Christmas Eve, and the
thrill of trespassing.

The rustic wrapping is full of hope,
a family’s intimate history written
in twisted straw and cursive grass
and sometimes fine sepia print.

There’s the urgency of architecture:
this twig here, then this one
crossed with that one
just so, and a piece of dried leaf,

the inside saved for certain grass
as fine as human hair, neat and
sculpted as the mother’s breast,
and at the center: her luminous eggs.

Here is the brief imprint of life.
The wonder of a mother bird’s
skills, all the timing just right,
her chicks’ complete belief

that their grim orange beaks
would be filled and they
would persist as surely
as mornings in May.

Why I’ll Never See Him Again

Because of a blue SUV, some black ice, and
a juniper known as an Eastern red cedar.

Because he drove with his eyelids half-staff
alone in a narrow peninsula of thought.

determined the course of his speeding car.
Because of a twist of fate/the unnamed/

the mirror he broke/or maybe God’s will.
Because the full moon couldn’t conjure a spell.

Because there is always a ceiling on life
and time has revealed the number of floors.

Because all our prayers had broken wings.
Because now his barefoot soul is gone

without keys or cell phone, wallet or watch—
but can he still hear me calling his name?

Because of the unyielding trunk of a juniper
tree and a guillotine of ice.

Sally Sandler is a graduate of the University of Michigan. She is a published poet who has lived in San Diego for almost fifty years and is a wife, mother, grandmother and dog lover. Her writing has been published in numerous literary journals in the United States and abroad, and she has multiple books available on Amazon.com In Spring 2020, she is caught with one foot in a known world and one in the midst of a global pandemic. A new threat is added to the losses she writes about that accompany her aging Baby Boomer generation and their concerns for life on a fragile planet. She questions what will become history, and what we will carry forward for our grandchildren.