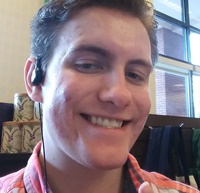 The sizzling, smoking sound of the grill combined with the crackling of the meat as Chuck tossed it over or pressed against it with a well-practiced hand, accompanied by otherwise blissful silence. It all became more pronounced around 8:00 pm for Chuck since they closed at 9:00 pm. He is the cook and owner of Chuck’s Diner, a quaint little family ran place in a rough part of town with butcher shop in back. The diner prides itself on one thing: The Chef’s special called the Chuckxplosion.

“Order up!” Chuck said with a hint of gruffness while placing a white plate carrying a nicely toasted bun sheltering a savory, juicy burger and crispy golden French fries up on the window.

“Right away, Dad!” a more high-spirited, young voice responded. It was coming from Chuck’s son, Davey, who worked the front. He briskly approached the only occupied table after grabbing the plate.

There was a man at the table who wore a black hoodie, sweatpants, and some sneakers with a gym bag on the seat beside him. He was sweating bullets as if he had just gotten back from a nightly run. “About time! This Chuckxplosion of yours better be good considering how long I waited,” he commented in a huff.

“I assure you, sir, our burger is the best in town.” Davey sat the plate down then said, “I hope you enjoy.” He gave a little bow and strode away.

The hooded man bit into the burger moments later and his eyes lit up with an idea. He scarfed down half of the burger and waved over Davey. “You’re uh, right! This is the best damn burger I’ve ever had. I’d like to give my compliments to the chef, if he’s still around?”

Davey grinned. “Of course, sir, I’ll go get him right away,” he stated. He then stepped over to the food-window and yelled into the back. “Pa! This man wants to see you! Get on out here.”

The burly cook soon appeared standing up straight in the doorway leading to the kitchen with a plate in hand that he was cleaning. “What does he want to see me for? We don’t do refunds,” Chuck retorted while setting the plate on a nearby table.

“Fine, but he better not be complaining,” he grumbled and made his way towards the table. “What can I do ya for?” He eyed the man.

The man set his gaze on the chef at his table. “This is possibly the best burger I’ve ever had. I really outta…” His voice trailed off as his hand slipped into the gym bag. “Give you some sorta tip, yeah?”

“That’s really kind of you—” Chuck was cut off abruptly.

The man pulled out a shotgun and aimed it at Chuck, pointing briefly to his son too. “Hah, I love family places! How’s this for a tip: if you wanna to keep this a family place,” he said while scrambling to a stand. He was shaking while holding his gun between the two. “I suggest you get what I want. Money! Now.”

Chuck immediately put his hands up and gestured for Davey to do the same. “Look, we don’t want no trouble. We’re just a father and son place…. You want money? We can give you it.” He shuffled backwards towards the counter with his hands raised.

“Stay calm, Pa. Just give him what he wants,” Davey said. He was frozen in fear behind the register.

“Good, good. Okay. Now we’re talking.” The robber pulled his hood further down on his head while keeping Chuck under aim.

Chuck breathed heavily, trying to think of anything to escape the situation. Then he remembered the plate. Yes, the plate! Just a little further… He gave the robber a nervous smile as he moved and eyed Davey.

Davey promptly rubbed his head, only to have the robber turn his attention to him.

This gave the adrenaline-filled Chuck enough time to grab the plate and throw it like a frisbee at the crook’s head, luckily making a heavy impact.

The hooded man let out a loud yelp and toppled to the grown in shock, dropping his gun and grasping onto his head. “Ow! What the hell, man?” he groaned out.

Davey jumped around from behind the counter to make sure the man didn’t get up, knocking his gun away.

Chuck took a moment to breathe and look around, taking in what just happened before finally stepping over to them. The burglar was still conscious and struggling under Davey as Chuck bent down and picked up the plate that miraculously didn’t shatter.

“Let me go! I wasn’t going to hurt nobody! Just wanted the money, man….” he explained, groaning in pain.

Davey glanced up to Chuck as he continued to pin the man to the ground. Suddenly, everything was calm aside from the man’s struggling and jabbering to not call the police.

“Now what would we call the cops for?” Chuck finally spoke up. He leaned down towards the man who by this point was looking more scared, as if their abrupt silence weirded even him out. “Looks like the special is back on the menu for tomorrow, boy!” With that, Chuck gave the man a small smile and promptly hit him on the head with the plate.

What followed was business as usual. Davey dragged the body into the back for Chuck to prepare in the morning. Chuck stayed up at the front, making sure everything was clear and ready for lock up. He reflected on the night’s alarming events as it was the first time they’ve been put in danger. Once Davey returned, Chuck peered over at him and said, “Do you think we’re the actual bad guys, Son?”

Noah Walker is a writer from Dallas, Georgia. His hobbies include playing video games, writing short stories, and reading. It helps him stay up to date on the newest stories and provides inspiration for his own writing. He also has a very fluffy cat named Penelope that often lays on his lap or arm while he does his writing.