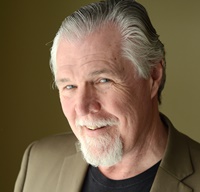 Edward Daniel Hunt’s short stories have appeared in the Scarlett Leaf Review, Down in the Dirt Magazine and Adelaide Literary Magazine. “Hit Men Have Feelings Too” was named a finalist in Adelaide Magazine’s 2018 Literary Award Contest for Best Short Story. He lives in Old Orchard Beach, Maine, within walking distance of the ocean.

I come from a family of writers and would be writers. Even though I have an undergraduate degree and a graduate degree I have never shown much interest in school. The only thing I seemed to do well in, and showed interest in, was writing. I remember in the fourth grade my friend Marc and I trying to write a Hardy Boy Mystery rip off, only substituting our own names. By the time I got to college I began to get serious about writing, especially after a college professor took an interest and encouraged me do something with it. I attempted to get some short stories published throughout my twenties and thirties. I also wrote a novel that my poor mother, may she rest in peace, who was always supportive of my writing, typed up on her Royal Typewriter. After rereading it several times I decided it was too depressing and I never bothered to seek publication.  Widowed young with kids to raise, I used that as an excuse to stop writing. I always said I would get back to it but didn’t until my sixties. The untimely death of one of my favorite authors, Kent Haruf, at the age of 71, prompted me to start writing again.     I bought a new computer within a week or two of his passing and have been writing ever since.

My first published article was work related about the negative impact of consuming too much salt. This appeared in the Montachusetts Review, which I believed was published on a quarterly basis by a local HMO. I was not a clinician so I basically quoted from various other findings and tried to spice it up [pun intended] with interesting side bars of little known facts; such as where the saying “worth his salt” came from. [The Romans used to pay their soldiers with salt which was of some value in those days.] I also had my first review from an owner of a local potato chip company who accused me of being biased.

Penance is the title of my recently released novel published by Adelaide Books. It was loosely based on a homicide I heard about decades ago. The characters in the book are fictional but comprised of many different people I have known over the years. Much like life, there are no black and white characters. All are shades of gray. My favorite character is Tony Gazzo, the highly efficient, sociopathic, possibly autistic hit man and right hand to a Boston crime boss. While you get to see him at his worse, you also get see him when he seems to be kind and caring.  The story. featuring retired Boston homicide detective John Gilfillan, is about the efforts to find Lori Doyle who ten years ago at the age of sixteen witnessed a homicide that went unsolved, committed by her then boyfriend, now ex-husband. Today, Lori has established a new life for herself and her young daughter, living in Maine under alias. She has also met someone and is beginning to think she has a chance for a better life. Unbeknownst to her, some are seeking her out to do her harm and some to do her good. If you like a story with multiple homicides, love stories, dysfunctional families and can believe that one last homicide can make for a happy ending, Penance is definitely for you.

It seemed like forever but it was actually about three years. I am my worst critic and I can read and reread something I just got done writing and continue to make minor changes. I am not disciplined enough to write a certain number of words a day. Sometimes more, sometimes less. I usually go back and read what I wrote the day before, editing as I go and then just keep going. Some days it flows and some days it doesn’t. I am a true “Pantser” meaning I really am not sure where the book is going and often wind up somewhere that’s even a surprise to me.   I always have a rough idea of the plot in my head and sort of, kind of how it’s going to end but not exactly. An example of this is I originally had the book ending with Gilfillan, the detective, but decided that it made for a stronger ending to end with Lori. Some characters took on a much more expanded role such as Tony Gazzo, after being introduced. Tony was a minor player but I felt the readers would appreciate someone like him if they got to know his background and could see a different side of him.

I often write with the television turned on to the local and national news. I write better in the morning than later in the day, although that doesn’t seem to stop me from trying.

I love music but have no talent.  Rock, blues even some country. I sometimes think I should try my hand at lyrics.

Oh, there are lots of authors and books that have influenced me since I was in grade school. Before being old enough to go to school, I can remember taking out children books on our weekly trip to the library.. In grade school my taste ran to the Hardy Boys and even my sister’s Nancy Drew Mysteries. I got hooked on Horatio Alger’s stories early on after discovering my grandfather still had some. Those books had titles like Sam’s Chance or Sink or Swim or Pluck and Luck and all had similar themes about young boys who through hard work and perseverance becoming successful.  Most of these books were written in the eighteen hundreds. As I got older I started reading whatever was lying around the house; mostly mysteries like Perry Mason or authors like Agatha Christie and some popular fiction of the fifties and early sixties from authors like Harold Robbins.  I particularly liked Robbin’s “A Stone for Danny Fisher.”  This was made into a pretty bad Elvis Pressley movie later.

As  an adult, some of my Favorite authors that may have had some impact on my writing would have to include the late Kent Haruf [Eventide, Our Souls at Night], Richard Russo, [Nobody’s Fool, Empire Falls] and Dennis Lehane, [Mystic River, The Drop}. All three of these author’s characters standout and are truly memorable. I like and enjoy many other authors but I don’t know if they have truly influenced my writing.

I am about half-way through my second novel 96 Tears, the second in the Gilfillan detective series.  In 96 Tears, Raymond Carlson is recently released from prison after serving more than twenty-five years for attempting to kill his pregnant wife and for actually killing his five year old son, by burning down their home, with them in it.

Diane, now his ex-wife, is convinced he is going to do everything possible to finish what he started. As a recovering alcoholic with some mental health issues of her own, she has had little or no contact with her daughter, Katie. Now, with no one else to turn to, she reaches out to her daughter for help. Since the authorities don’t seem overly concerned, they decide to seek the assistance of retired Boston homicide detective: John Gilfillan.

An expanded chapter from “96 Tears”, titled “Pieces of the Puzzle” was named a finalist in Adelaide Literary Magazine’s  2019 Best Short Story Contest.

I have been told by a marketing consultant who has read my book that she believes that my reader’s profile is slightly  more female than male, most likely older, 40 years plus and educated. I tend to agree with her although I think there is something in Penance  for everyone.

Don’t give up. If you have some talent, you will get published. Keep trying to find a home for your writing. Where have similar books been published? Try to publish in some of the various magazines in print and on line, it gives you credibility. Pay attention to any feedback they give you.

Find your own voice and stick to it.

When I am writing, my pleasure reading goes way down to maybe eight to ten books. I have been trying to limit it to books from authors I have met and may have even have autographed their book for me. I have a stack of books next to my bed right now.

I think my strength is in my characters and while my characters may be flawed, they’re real, with some of the problems we all face on any given day.

Prior to the Pandemic, the industry seemed to be doing ok. Independent Book Stores struggle but many have been able to carve out their niche by making the book buying experience more personal and by supporting writers and sponsoring author readings and signings, etc. We should do all we can to support them in return.

I don’t think it’s ever been easy to get published but definitely harder now. Publishers don’t have the resources to do much editing and expect books being submitted to need very little editing.  Authors today need to utilize whatever resources they have available to produce the most polished, ready to be published version of their book they possibly can. Those resources may include critique sessions at conferences, writers groups or independent editing.  If you are fortunate to have found an agent and that agent knows her stuff, she should be able to tell you what is selling and what is not and what is trending. If as an author you are trying to do this on your own, professional writing associations and trade journals can be an excellent resource of what’s trending and how we can respond to these trends.