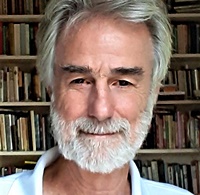 “You’re here with the conference?” the clerk asked as he paid for his inspirational paperback and his Dentyne.

“Al-Anon,” he replied, trying to meet her lowered blue-green eyes and instinctively bumping up his status lest she assume he was AA and potential bad news. Why the tactic occurred to him, he had only the faintest idea.

He scanned the face framed by her clipped-back grey-blond hair. Tanned, lined, even a tad haggard, showing every bit of her presumable age, marking her, as much as the cowboy shirt and jeans, as a horsewoman. She was nearly as tall as he, and met his nervous smile with an easy grin that could have been spent on a disheveled teenage son.

“I guess we don’t need introductions,” she said, pointing to her name tag (Marlene) and his (Sam H., Indianapolis). “You’re far from home.”

“Good buddy of mine invited me down here. So far, the fellowship and the food have been worth the child-size seats on that damn airplane.”

More chit-chat ensued, and her interest grew more interesting; but it was not until she turned away for a moment to check for something in the back room that his own interest grew into intention: that long sauntering tightly wrapped figure with its perfect pear-shaped butt demanded this bit of socializing continue, just in case.

For 10 minutes, interlaced with chirpy customer greetings, it did. Then she welcomed a replacement clerk, stepped out from behind the counter, and said to him, conversationally enough but inaudibly to anyone else, “I’m off for lunch. How would you like a cup of the best coffee in Brazos County, if not all o’Texas?”

Somehow without missing a beat, he murmured back “How could I say no?”

“I’m parked in back. Climb aboard.”

Sure enough, the bright red F-250 bore the double rear tires of a horse-hauler. He let her walk ahead a bit, just to take in the south view of the cowgirl once more. Subtle, serpentine, unself-consciously erect as a runway model. He slid in and rode off from his appointed sanctuary for self-improvement, glancing over his shoulder for prying eyes. After all these lessons in liberating oneself from guilt, he was reveling in its embrace again.

Her home down the highway was a neatly kept, utilitarian ranch-style affair with a sprawling emerald pasture in back where two coppery quarter horses strolled and munched. The drive there, livened by her ebullient description of the pine woods country she’d known for a lifetime, took 15 minutes. Within 20, they were in bed.

When they had exhausted themselves, he rolled onto his back still clutching her, touched  by the bony delicacy of her back, the wildness that had come to her undone hair. For a man whose failed marriage had driven him into the arms of a pious support group for families victimized by alcoholism, this giddy encounter had a feel of one part vindication, three parts mockery. Being unencumbered could carry such a load.

Marlene was first to break the languid wordlessness. “Well, then, I suppose you’ll have to get back to your business,” she said into his chest.

His reaction stunned him as well as her.

“Really?!” he shot back. “That is your thought for my proverbial penny?”

She raised her face to his. Her countenance had softened, as if having shed years. Her eyes were wide.

“And what kind of gal are you making me out?”

He was silent for a long minute. “All I know,” he said, “is right here. I’m not thinking about what’s next and I’m sure not putting a label on you.”

It was her turn to keep thoughts to herself. She stroked his chest hair absently. Already, his blood stirred again. He resisted, and spoke to the ceiling.

“You know,” he said, “it’s been a long, long time since my love life, if you want to call it that, was about lovemaking. It was fights, and hiding bottles, and pouring out bottles, and surprise bills, and jail, and hospitals, and about everything else on that side of the better or worse equation, and there it all went and here I am, going to meetings in the middle of Texas like meetings in Indiana. But you don’t need to hear my sad story. I’m sure you have a chapter or two of your own.”

“For me,” she sighed, “it was one of the others of the Big Four. Not the booze, the beatings, the gambling. It was the women. Lots of ’em. I put up with it, lied to myself about it, for years before I decided to be alone on my own instead of alone with him. I came out of it with this place and the horses. Of course, I came in with them too.”

Sam found himself blurting consolation. “You loved him. You wanted to be a good wife.”

She rose from his arms and spoke across him, to the wall and herself: “I guess it was ego, really. I couldn’t accept not being able to give him everything he needed from a woman. Not being . . . enough.”

She bent and lightly kissed him, then leaped to the floor and pranced to the bathroom.

They showered together briskly, then schlepped about naked like a long-married couple, he retrieving his clothes, she pecking through a dresser drawer for panties.

“You know something?” he announced as he buckled his jeans.

“Oh damn. You know I’ve got to get back to work. I just told ’em a couple hours.”

She moved into him, threw her arms around his neck, and gave her hard features a girlish pout.

“Better call it in.”

“But how ’bout you? Don’t you have people expecting you?”

“I had to get away for a while. Get in touch with my Higher Power, as we say in 12 Steps.”

Her fingers began working his belt.

“And have you found that Higher Power?” she asked.

He spoke over her shoulder, distant.

“I need to see this place. To feel it,” he said. “I want you to take me over it. All of it. I want to watch you with your horses. Hear you talk to them. Let you teach me to ride.”

She drew his face to hers with both hands and shook her head slightly, lips pursed.

“Your good folks back there are gonna arrest me for kidnapping.”

He gripped both her slender hands and held her arms apart and away.

“I think you’re guilty as sin.”

She smiled. “You just might be right; I am capable of doing that sort of thing.”

She dropped his hands and folded hers.

He pulled her against him with a tenderness nearly chaste, and stared into her eyes. “Is that enough for you?”

She walked silently away and disappeared down the short hallway to her kitchen, from where he presently heard a faucet open. Her voice came with an echo.

“I’ve got cream and sugar. But if you don’t take it good and black, you’ve wasted a long trip.”

Cups rattling, the only sound. “Sam? You there, Buddy.”

He waited with eyes closed, replaying the mental video of her receding figure. Such a subtle wave to her movement, splashed with a toss of the ass just sufficient to show pride of ownership. Ah, the ache of this.

Dan Carpenter is a freelance journalist, fiction writer, poet and blogger, residing in Indianapolis. He has published stories in Fiction, Prism International, Laurel Review, Sycamore Review and other journals, along with two books of essays and two collections of poems.