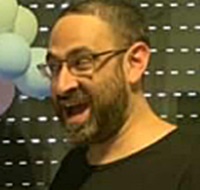 A is almost the emblem of anarchy, but its structure, like language itself, is fairly hierarchical, with narrow one percent nadir and top triangle superstructure over an empty as alienated base. As a pictogram it is almost a fingertip, but very much the pencil’s edge, with which one can begin writing. An alpha male, A appears before many a wording. It is likewise the hidden syllable in hey, the beginning before much of our discourse, and also the sound aaa of us restarting a recalibrated discourse. It is a necessary precursor for dialogue, being symbolized by the secondary letter B, whose appearance is appropriately reminiscent of erogenous body parts. It is composed of a necessary backbone I which allows eyes-out-of-socket looking forward as leading to its essential see C. This letter is also sea, its visage that of something ready to contain the entrance of whatever is seen, with its aperture allowing capture but also release, knowing how now must go on.

D is used in current text-based communication to indicate the tongue-out wink of humorously defusing one’s own message or the other’s, the D spoken-syllable so prevalent in the defusing of meanings, as in demeaning. But a D tongue lunge without C eyes wink, indicates a tiredness, a breath-catching weariness, which to me is at the heart of demeanings.

Naturally E comes after D, a symbol of teeth supporting D tongue. But it is also the business end of a pitchfork, and thus is tied along with D shovel in nutrition, growing nourishments (or grave robbing). F is for flag, even when that flag is denoting failure. To me it is a flag of capital F freedom, open ended, forward feeling all forms of functions.

G is one of the more visually complex emblems, perhaps in accordance with its stature of being the genesis of The Word, God. The sound G, gee, has replaced for an atheist world that God, its absence looming belittling, because without belief we are left like a little leaf flung by the chaotic wind of the empty flag.

Then H comes to the rescue as a rung on a ladder, allowing also a seat of rest and reflection on what goes below, as in Jesus H Christ. It is also a covenant between an I and an opposite I shaking hands to make the deal of intersubjectivity, made possible by holes in H-hearts, hearing their hollow made holy. It is this hand holding which keeps alive the bonds of H, hydrogen, the basic building block of our solar system, and in H2O sustaining life.

It is only after the above meeting of I’s that they appear with plain i visage, having the character of an upside down exclamation mark. When, like ants, these little figurines of body and head profile are written as individuality, they are given the culture’s honor of capital primacy, usually reserved for beginnings, holy words, and whole-making names. Yet this holding in high esteem of the I-ndividual is accompanied by its mathematical and roman numeral modesty, I being always the only one, but also always only one.

J is the first letter which corresponds to the sound of the above mentioned naming, Jay as in the bird, the doctor, the great Gatz. Graphically it is a hook which catches prey and its many possibilities into the net of naming and branding, leaving one again by hooky crooked a single isolated I. But it is also a bent down nose of exploration, curious sensing what the wind which carries J the bird means to I the man.

It brings K, Kay, female counterpart to Jay in the single-letter name world. With this is mind the character visually suggests the meeting of excited erogenous organs, a foreword play leading to L, the receptacle of pure acceptance, a lap for love.

M is characterized by middles. While seemingly suggestive of the sexual penetration hinted at by Kay and Jay’s I, it is also a post coitum romantic hand in hand intimacy, I’s meeting in the middle of the space between them, going from H to trinity, I and I apart with two touching lines, their forces combined into an M=am, a being in the now. Perhaps because of this M is also an uncertainty, mmmm, of trying to find the next verbalization, or a response to one which communicates the taking in of the other but not knowing how to continue reciprocity and keep the intimation exchange intact.

In comes an N, its hand extension possibly left one-sided, but potentially supporting a future joining. As such N is is also the adjoining of pronunciations, such as I N Thou.

As a permutation in shape and symbolism of H it is necessarily followed by O, of H N O bestowing on every one of us life. Like life itself O is the ultimate container, the third eye perceiving a perfect circle planet, or immaculate atomic emptiness, maybe a nucleus or membrane, an egg just before opening. In discourse like the Aaah sound it is of a precourse function, yet also of prayer, not only in “oh god,” but in a way via “oh no” too and even “oh well” and “oh I thought that.” This is a wishfulness, a petition above laying under all such formulations, from the faithful to the faitheist.

P of pleading praying is also a closed off flag of the panoptical, raised above the population of public-is-personal people, but still also raised by the spine of an I. Together they are your IP, the finberoptical means of locating anyone in the polices polis of WWW. This all-knowing superior side-tongue a wink of the mouth meets its match in Q, that most curious of letter shapes, a questioning in and of itself. Is it a ray of refraction entering the optical O? A broadcasting of eye-language? A jumping outside the nothing of containment? The I proselytizing before the all seeing void? I guess it is most of all the Q to the A, the quest questioning O and P’s know-it-all, the function of dialogue which is essential in communication as a precondition for understanding and togetherness.

Naturally following is R, are, where one humbles himself to hold high the tongue flag of another I’s vocalizations, praying in bow for reciprocity. In that uncertainty R as rrrrr joins A and M as the three pillars of our lingual process of finding A’s Am’s Are’s and what comes after them. Somewhat biblically, Genesis style, sneaks afterwords the serpent shaped and snake sounding onomatopoeia S. Through its convoluted complexity it seems to suggest that turning an (A)M into (A)Re is not so simple, even sometimes sinful. S is the worms in the forbidden fruit of the T tree, where the words of man can become the cross he must bear, crucified to the very T antenna through which he heard the promise of I H U.

So here comes U to the rescue, where the atlas I of T can enter and become perfect tongue, native, motherly, swinging side to side, seeking its balance.

V is that balance, the pure outstretched hands reaching a unity without the I’s, the victory presaged by H. If H was a couple I,

W is a double you, and like V it is a leaving of sole self for to search and see through the I of U, as mediated by the Lingua Franca of French kiss, and the child holding one parent’s left hand, another’s right, keeping them in togetherness in a way they never knew before.

X marks the spot we searched the map for, looking for a kiss, coupled I bowing into the unknown, together as a variable two.

Y they do not know, maybe it was all just to get to the end, the Z of a one-sided hourglass, parallels meeting through one outstretched hand, holding high and low, as below so above, where language stops and the music of angels rises far above it.

Omer Wissman is 36 years old, single, a multidisciplinary artist. Omer narrowly escaped high school, but not junior high. He barely graduated from university, albeit with some honors. His soul was partially saved by a book of poems that opened up into a life of writing. After exhausting local publishing opportunities, Omer returned to the queer’s English, and thus far has been accepted for publication in Sensitive Skin, Serotonin, and Overland, among others.