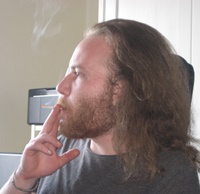 all those times no one’s ever around

“how can you breathe in here?” she once asked, curiously

countless empty bottles decorate an apartment soon to be abandoned

can we find each other once more

apologize for the first time

old flames reignited in the distance

black smoke in the air

the forest is finally devoured

an earthquake swallowing up the town

surrounded by an infernal wall and nothing else

from afar visible the airplanes of the enemy approaching fast

are we ever to discover sanity?

it was lost inside a bottle our love

drinking nonetheless for there’s no money for more

drowning insects and they’re gulped down

we escaped the tears

through the phone sorrow voices and sobbing eyes

never there to catch your tears in

bodies underneath blankets of snow

dirty needles underneath the couch

bags of blow on the coffee table

nothing but the page

nothing but a candle

there was never a way out

she found out the harsh way

it was all over

we fucked it up

and there was nothing we would have done differently

even if it meant

that does not even exist

stare up at the starless sky, the great green mushroom—all gone,

nothing left but the final wails of unborn souls trapped in limbo.

gruesome realities and morbid details, nets made of fire catching

the rational men. eradicate, destroy, rebuild; what a fine writing

on a half-ruined brick wall in the middle of the ocean.

look down, all the towers emerge from under the sea—old homes,

under the liquor store they swim, amidst the shelves they sing.

if you are, die; if you think, you don’t exist. Voltaire’s ghost

promenades in the ruins, somewhere in the distance

and we’re still around—in the liquor store the clerk polishes a shotgun,

two kids shotgun beer in the back alley.

and the mauve moon howls, its echo shattering what little

Hollow Dream from a broken bed

years chasing around the same fantasy,

an impossible dream doomed to remain in its stillborn grave;

every tiny step towards it equals five big steps away from the end of the tunnel,

it’s alright, all these years

some legal, most illegal,

indecency, debauchery, immodesty, everything done by the book

of hell, and yet

all the rulebooks in the world will not provide an answer,

it’s okay, she used to tell me back when we lived together

goes on and on, we lay on the fold-out blue couch, holding hands, her head

on my shoulder, we kissed, watched, smoked, drank… now,

she’s in a nameless grave somewhere in Aarhus, I couldn’t even

go to leave a flower when I moved away.

only the yellow pages I threw on the coffin that fateful Sunday afternoon, I was so

drunk I didn’t even know where I was; I only knew why I was there. all

ever mattered since then.

the dream still plagues me while

for a pair of eyes to remind me of hers. nothing.

only cheap replacements, cold embraces, fallen angels that only last

from dusk till dawn.

starving editor somewhere in another skid row) and then I’ll go on with the clichés,

“I never gave up, I followed the impossible dream, struggled yet made it”

and I’ll know I’m lying my ass off; I gave up the day I drew my first breath.

I gave up when she exhaled for the last time. I give up whenever I get a rejection slip.

I give up every single second I’m breathing; even now, as I type this poem

that will either remain unread or will be in future anthologies I’ll never see,

let alone curate. and it’s alright, either way. I gave up a long time ago,

and tomorrow I’ll give up again, and again.

and the day after.

the impossible dream; no fuel to keep me going,

nothing to make me push forth. more obstacles,

no strength left to jump over them and reach the finish line.

carry me away, I’ve given up;

wheel me out of the track, of the world, of the universe…

I’ve never started, so I even failed at giving up.

where the worst of humanity hides, where they’re tossed to save

the rest from seeing them—lounges are good for dancing, for

meeting that sweet young woman to take your heart and keep it for a while.

a dive, a real goddamn rundown dive that reeks of dried urine and

cheap booze and even cheaper junk cooked down to being genocidal,

is the birthplace of literature, of poetry—sterile classrooms are good

for bestselling lists; in the dive

lines are written with real blood, the sweat and tears are not because

of a malfunctioning air-conditioning unit but from breaking your back

through cheap booze, rough women, and southpaw fighters you discover that

cheap thrills, cheaper drugs, and plenty of booze, for people

living in alleys and under bridges, for those breaking their backs so that

students can rally for their safe spaces and their comfort puppies

and their pronouns it’s a simple world, cry loud enough you’ll be heard,

calling his wife a whore three booths down, somebody else is punching

the walls and two junkies play darts with their spikes.

aspiring heroes give out their first cry under

and meanings—come look at the new heroes, they’ll

to save us, burning down the towns, shooting down

double rotgut, seeking strength to do what had to be done—graphite

used for trade, a fifth of vodka costs a kidney—nothing left, it

all went to few hands, the many lie in dead volcanoes—boats

anchor amidst schools of sharks, away from mushrooms—something

in the air, a mist, a ball of fire—here’s the end! another crazy man with

George Gad Economou holds a Master’s degree in Philosophy of Science and resides in Athens, Greece, freelancing his way to a new place. His novella, Letters to S., was published in Storylandia Issue 30 and his short stories and poems have appeared in literary magazines, such as Adelaide Literary Magazine, and his first poetry collection, Bourbon Bottles and Broken Beds, is slated for release in 2021 by Adelaide Books.