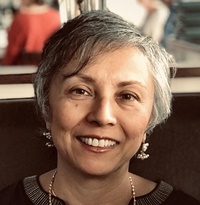 I was born in a country far, far away from where I’ve lived most of my life. Some may think I’m not Indian enough because I don’t know where the best Indian restaurants are. But it’s really because my mother and my husband, a professional chef, make better Indian food than any Indian restaurant around. By the way, my husband is not Indian, although he could pass for one when he’s standing next to me. The flip side of not being Indian enough is being too Indian. Are you taking away white people’s tech jobs? I don’t work in tech and here’s the other cliche-I don’t own a motel and neither does anyone in my family. I have a strange name that I have to spell for people every day of my life and my skin looks like the color of an almond latte, how exotic. Everyday of my life I’ve been asked in some way about my Indianness and still, all I have to say is:  I am not your Indian.

The “What are you, where did you come from” questions came at me like small tsunamis once we settled in California when I was eight. Before we became Californians, my English was shaky, so I imagine most of the questions were aimed at my older brother or parents, who already spoke English. A few months into our stay in the Bay Area, I was called burnt toast, nigger and exotic, all terms I had trouble understanding. Occasionally, I was told that I was lucky to have a year round tan. It’s California, after all.

One of my first memories of my otherness was when a third grade classmate asked me, “How did you get here?” My young mind did not completely comprehend the question. Also, said classmate had a lisp and was prone to letting small missiles of saliva spit out from her mouth as she spoke. “What do you mean?” I asked as I wiped her spittle from my eye. “Like, the teacher said you’re from India, right? How did you get all the way to California?” I didn’t bother to tell her that California was only the eighth or ninth stop on our multi-continent journey from our native country. I decided on a different tactic. “Canoes,” I said. This answer seemed to confirm something she was secretly thinking.  She nodded knowingly, “Yeah, Indians, canoes, right.”

In college I sat in Accounting 1A taught by a small Filipino professor who on the first day of class, asked everyone where they were from. When my turn came up, I replied that I was from California. His expression turned hard. He said, “Where are you really from?” I lied and told him that I was born in California, but my parents were from India.  This man was not going to pigeonhole me. I underestimated him; he snarled, “Don’t be ashamed of who you are!”

The following week, I saw said professor again, this time coming out of the dorm room of a boy who lived down the hall from me. I paused outside my door as I watched the two of them exchange awkward, meaningful glances. The boy’s arms reached out to the professor in an attempted embrace, but the professor stepped back. The boy looked confused. The professor glanced my way and said, loudly enunciating each word, “Thank you for the lunch! I did have a good time!” I waved to the professor. Who was ashamed now?

“Are you Indian?” asked the Indian guy who sat next to me in my Econ class. I hesitated before I answered. I recognized this as a come on. It was an occupational hazard of attending a college with a small pool of Indians. Should I dissuade him by answering yes, but not deign to look at him? Rude, but it usually got results. That behavior would ensure that he would leave me alone to ponder economic theorems and the supply and demand curve. I decided to let my guard down by erring on the side of politeness. I looked at him directly and said, “Yes, I’m Gujarati.” He was from Madras. “Oh, my mom’s a Guju, my dad’s Bengali,” he said. I liked him, he used the friendly slang for Gujarati.

Are you Guju? That’s so much more specific. Like when Gujus in the States ask my parents about their ancestral village. That question cuts to the chase, no bullshit. Once they find out the name of the ancestral village, they will know the pecking order. They will be able to answer the real question that’s being asked. Am I above you or below you in status? Do I have to take your crap or can I dish it out to you? I could always see immediately what the results of that question were by the looks on the interrogators faces. Smug smiles meant they’re top dogs, eyes cast down meant they’re getting ready to prostrate themselves. I’ve seen both.

In India, the question of ancestral village has no meaning unless you’re from the same state. Therefore, Bengalis vs. Gujaratis have no pecking order, per se, since they’re not from the same state, so by default they revert to the universal standard of measure:  Money. Who makes more money? If that doesn’t work, the next default is education. Well, you can always trot out a, preferably, close relative, like your son or daughter, who attends Princeton or Harvard or Yale, or Stanford if you’re on the West Coast. Brahmins love this one because it puts them over the money hungry lower castes. Money! Bah! Who needs it? We have highly educated children who bring us reflected glory; they will eventually earn a lot of money, too, by the way. Last, but not least, on the status ladder is profession. Doctors are at the top of the food chain, then engineers (Software, Civil, Mechanical, generally in that order. Civil used to be first, but after the dot com boom, software surpassed civil for obvious monetary reasons), followed by scientists.  Business people count only if they make large sums of money.

The other day I went to Berkeley to buy tile for my bathroom remodel. It took a solid twelve minutes to get someone to help me. There were no other customers in the store. It’s Berkeley. When Robert, according to his name tag, finally asked if I were being helped, I looked around and said, “Why no, Robert I’m not, as a matter of fact.”  He took my name and address for the order and of course, this being Berkeley, explained to me very slowly, “That name is either Malaysian, Hindi or Swahili.” I cut to the chase and told him that I was born in India. I was waiting for the “But you have no accent!” part of the conversation when instead he said very solemnly, bowing his head for full effect, “Namaste.” “Yeah, sure,” I mumbled as I left the tile store, thinking, why doesn’t anyone ever bother to ask if we Indians even say namaste?  We don’t, by the way. At least the Gujaratis that I grew up with never did.  We say “Kem cho” which translates to “How are you?”  My husband and son say “Game show!” because that’s what it sounds like to them. I have grown fond of “Game show!” as our preferred greeting.

I speak Gujarati with an American accent so strong, that some of my Indian relatives who still reside in India have trouble understanding me, so we only speak English. Once, on my last visit to India, I practiced speaking only Gujarati, so that I could improve. At the end of the trip, a relative congratulated me on my American Gujarati. She said that she found it quite entertaining. I paused and with a big smile thanked her for her Indian English. She looked flustered, confused, possibly ashamed. Namaste.

I had an issue with my credit card company once and waited patiently for my customer service representative to get on the line. With a very slight Indian accent, he introduced himself as Victor. He asked for my name. I began to spell it. Jarred for an instant by my obvious Indianness, but without the Indian accent, he hesitated a moment before continuing the script in front of him. We both knew the rules. He could not engage me in any personal conversation. In other words, he could not ask me if I were Indian and by the same turn, he could not say that he was actually, Vikram and not Victor sitting in a call center full of a hundred other Indians working to perfect their American accents in Madras. I have to admit, I felt his pain. But I know he would be sorely disappointed by my Indianness. He would be sad to know that I have only returned three times in my life. My white acupuncturist has spent more time in India than I have. My India is born from the memories of my parents and relatives. I’m sure I wouldn’t recognize Victor/Vikram’s India on my next visit.

Recently a friend was in need of a sari for a Bollywood party and asked if I could  please help her out? This request was funny, strange, not funny ha-ha, on multiple counts. First, my memory of Bollywood movies is from a childhood fraught with trying to keep my Indianness under wraps, as if I ever could. Second, I find Bollywood movies on a par with Lifetime Television. And the accompanying Bollywood soundtracks are a form of music torture. (As an aside, I read that American troops, in 1989, used music by Ricky Nelson, AC/DC and Rick Astley, among others, to lure Manuel Noriega out of the Vatican’s Embassy in Panama City. It took three days of music torture for Noriega to cry “Uncle”.) Third, why any non-Indian would want to subject themselves to a Bollywood party with music on the same level as N-Sync or The Backstreet Boys sung in Hindi, is well . . . connect dots here.

I tried a new dry cleaner today. I changed dry cleaners because my old one was irritating me, questioning me on why I wanted to pick up my clothes a day earlier than he offered and acting as if I were asking him for the world when I only asked for my cotton shirts to be folded, not put on hangers. It would help me speed up the packing process, I explained, I’m going on a business trip. He would try, he said. I got them back on hangers.

My new dry cleaner is an Indian woman. She asked me my name, was I a new customer? I spelled my name and she didn’t flinch. I was waiting for her to ask me if I were Indian, the inevitable question. And when she didn’t, and only offered her own name, a very unIndian one, Rosie, I smiled. She smiled in return and asked me politely if she could ask why I chose her establishment. I said because it was next to my grocery store. “Easy to get in and out,” she said nodding, “see you next time. I’ll try to get the stain out of your shirt, but in the future, please don’t try it on your own. Let us take care of it.” I am happy that I have a new Indian dry cleaner who doesn’t ask me if I’m Indian. She takes me for who I am. I just might invite her to my house to eat some Indian food.

Swathi Desai is a creative director in the design industry and a graduate of the Wharton School.  Her work has been published in Prometheus Dreaming, the San Francisco Examiner Magazine and elsewhere.  She lives in the Bay Area with her family.