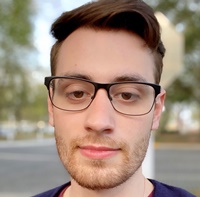 It is raining as it usually does around four p.m. in Florida. The humidity in the air is frustrating to say the least and my body sweat is beginning to show through my white button-up shirt. I smoke a cigarette outside of Flows and passerby’s occasionally give this twenty-five-year-old a glare as if to say, “What are you doing to yourself?”

I never started smoking because I thought it was cool or healthy, I started smoking because that is what I assumed a twenty-something-year-old gay Jew is supposed to do. We smoke in our twenties, quit in our thirties, live normally for twenty more years, then die of cancer as a consequence in our fifties. It is just how it is. Who am I to rebel against the gods?

James texts me that he is here. I put out my cigarette quickly against the brick wall of the bar and toss it into the garbage. I quickly glance at my reflection in the window and fix my consistently unruly hair, take a deep breath, and then enter the bar.

James leans against the counter and seems to be deeply involved in a conversation with the bartender. You know, the type of bartender who’s in his mid-thirties but has enough confidence for you to forgive him for reducing his self-worth to a bartending job. I know I sound really jealous and bitter here, but I truly do not understand the sex appeal of bartenders. James looks over.

“Jacob! How are you?’ he asks. I force my face to brighten up and try to return to the world outside of my head.

“I am doing absolutely fantastic,” I say. I’m really pushing it with my vocabulary here.

“That is good to hear. What are you having?” He looks at the bartender still standing there and gives him a wink.

“Vodka-cran, I like your style, Jacob.” With sentences like that, it is incredibly evident of the difference in our ages. Thirty-four years old and he speaks like a dad who time traveled from the eighties. Maybe it’s a South Korean thing, who knows?

James nods to the bartender who gets started on my drink. I notice a bundle on the stool next to James.

“What is that?” I ask, pointing to the bundle.

The bundle moves and I jump up. James gives me a look like I’m crazy. A snout digs its way out from under the blanket. It is a small, black pig.

“Did you bring a pig?” I ask, borderline interrogating him. Does he not actually want to be on this date and thinks that this is some sort of Jewish kryptonite? I’m thinking irrationally, maybe.

“Is it a support animal?” I ask. I know, technically, businesses can’t ask this question, but you can’t be able to just bring a pig into a bar, can you?

“No, he’s my friend. He was feeling kind of couped up in the apartment.”

Normally, I would just walk out of the bar at this moment. I know this is rude, but quite frankly, dodging strange people is kind of an artform I have developed in my short time here on Earth. However, my therapist told me earlier this week that I can’t just cancel people in my life due to slight disagreements like I’m twitter or something. So, I stick it out a little longer.

“That is…interesting. How long have you two been friends?” I ask, forcing enthusiasm in my voice.

The bartender puts my drink in front of me and I don’t turn to say, “Thank you.”

James goes into the story of how he left graduate school, divorced his wife, and entered a deep depression. He tells me that he tried to take his own life at one point, and it was not until he realized how much it affected the people around him that he decided to start working on his issues and seek out help.

Lucky was his answer to loneliness and feelings of purposelessness. Lucky gave him a reason to get up in the morning. So, he now brings it with him wherever he goes.

I nod my head, I drink my drink, I dance with him. I smile, I listen to his problems. We go back to his place; I spend the night. I disappear before he wakes up and the clock strikes seven.

It rains at four p.m. like it normally does in Florida. I smoke my cigarette outside of Frenchy’s in Dunedin and I watch the small waves of the causeway from the balcony. People walk past and give me a glare; I nod my head in agreement with them for the first time. I text Kenneth, my date for the evening: How far are you?

He doesn’t text back.

Zachary Aborizk  is writer and independent filmmaker based out of Orlando, FL.