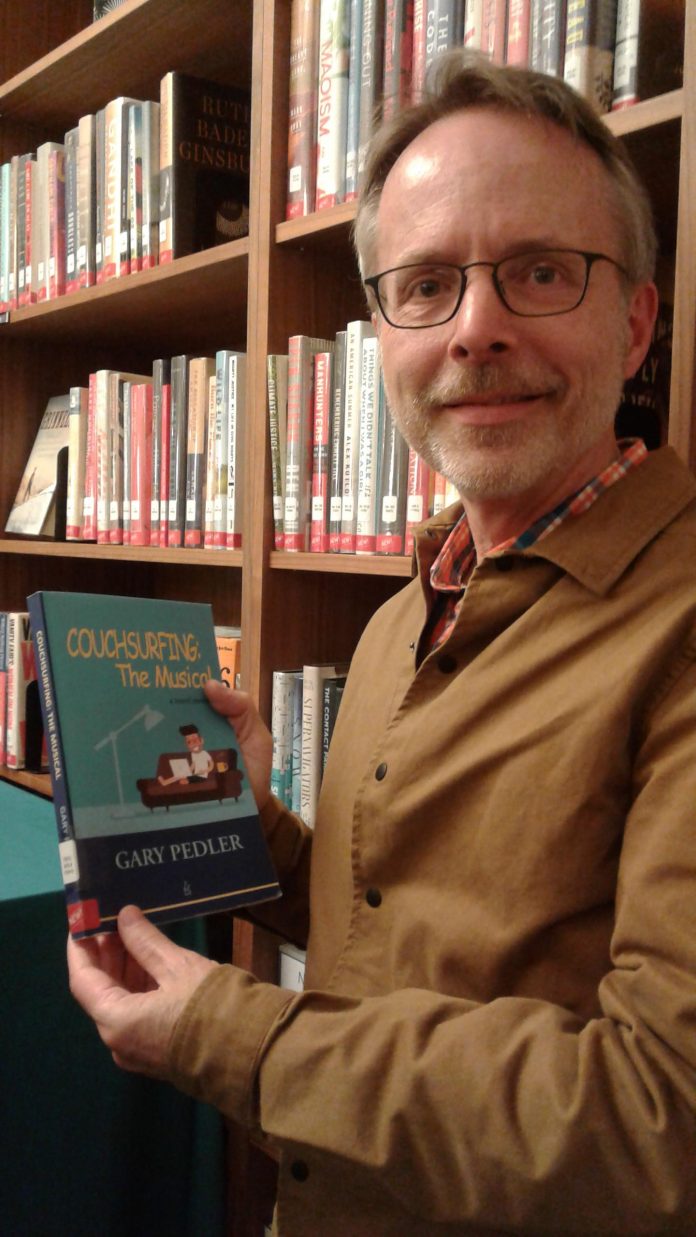 Most of my life story isn’t very remarkable in outline. But I will mention one thing that I did that was a little unusual. After retiring from my money-making job at fifty, I spent three years out of the country. Mainly, I moved in and out of the Schengen Zone in Europe. The rule of the Zone for me as an American was that I could be inside it for 90 days, then needed to be out of it for another 90 before I could enter again. So I would flip back and forth: 90 days in, 90 days out, and so on. I wasn’t on the move the whole time. Instead I would decide, say, to spend the summer in Edinburgh. I would find a cheap place to live there, usually renting a room in a shared apartment. When I wasn’t in the Zone, I would often slip over to the UK. I also made trips to Israel and India.

Looking back, that was probably the most interesting period of my life. I had time to soak up each place where I lived. When I spent a winter in Rome, I would see one tourist site a day, one museum or church, instead of having to cram a bunch of them into a short visit. I was lucky in that, in each place I lived, I made at least one friend, so I wasn’t completely alone. Usually I would meet some other gay man through a local gay group, like the gay country dance group in Edinburgh. When I spent a winter in Rome, the one friend was my landlord Silvio, an elderly gentleman who would take me to parties and family events.

Eventually, I decided it was time to end this way of life. Still, by then I’d learned some useful things. Including that I could live out of one suitcase for three years, and it wasn’t a big deal. I could only wear one pair of pants at a time, after all, so how many did I really need?

2. Do you remember what was your first piece of writing was about, and when did you write it?

At seven, I started to write what I thought of as a novel. Nothing so paltry as a short story for me! This “novel” was a mishmash of a number of movies and books. It involved an erupting volcano, a lost world containing lots of dinosaurs, and a handful of survivors, including, of course, one beautiful woman. My dad typed up what I’d written. In its typed form, my “novel” was only a few pages long, which was discouraging.

My latest book is Gaydonia. One day while I was working out at the gym, the idea came to me for a fantasy story about a small, poor country that turned itself into a gay tourist mecca in order to make money. When I got home, I told my housemate the idea. I ended with, “But of course I wouldn’t actually write this story.” I thought of myself as only writing realist fiction. She said, “I think you should write it. It’s a good idea.” Her saying this made me change my mind, and I started work on what became Gaydonia.

I wrote it first as a screenplay. This seems like a thing most writers feel compelled to do at some point, write a screenplay. Once I’d finished it, I sent it off to every agency I could find that handled screenplays. I didn’t get a single response, not even a “No, I hated it.” Just nothing.

I wasn’t completely naive and impractical, though. Parallel to the screenplay, I wrote a stage play version, assuming this would be easier to get produced. It did get produced, though in rather odd circumstances. While I was spending the summer in Edinburgh, I heard about a play contest run by a local gay amateur theater company. I entered Gaydonia in the contest. I found out there were only three entries. Surely my play was good enough to beat out two others. But no, it didn’t! The company chose one of the other plays. But then it had some sort of trouble with the playwright, so the company asked me if they could put on mine. The play was given three performances in a large space with a small audience. I tried to use this production as a launchpad for others, without success.

Finally, I wrote a third version of the story as a novella, and Adelaide published it. Maybe some film producer will read the novella and say, “This would make a great movie.” Then I can say, “Fantastic, I already have a screenplay ready!”

4. How long did it take you to write your latest work?

My work on Gaydonia was spread out over something like twelve years. This for a story that only has around 22,000 words! But I think I got everything about it right in the end. My fear once a book is published is that I’ll open it up and read it and think, “Oh no, I need to change this.” Except by then it’s too late. Thank goodness, when I pick up Gaydonia and read some of it, I think it’s fine, and I still chuckle at a lot of it.

Other than often taking a very long time to get a piece of writing in final shape – no, I don’t think I have any unusual habits.

6. Is writing your only form of artistic expression, or do you have others?

Writing is the only creative thing I do. Though I’m actually more interested in music. I spend more time listening to music, reading about it, analyzing it, than I do reading novels and thinking about them and analyzing them.

7. What are some authors and books that have influenced your writing?

I love British mysteries and thrillers, mainly from the first half of the twentieth century. Though I’ve never written in these genres myself, I’ve learned a lot from these books about dialogue, characterization, pacing.

8. What are you working on now? Anything new cooking in the wordsmith’s kitchen?

At present, I’m writing a YA novel about three young people who make a trip around Canada and the U.S. filming a documentary. The documentary deals with protests against the more destructive forms of fossil fuel extraction, like fracking and mountaintop removal. I’m learning a lot about these matters, which is both interesting and distressing.

9. Did you ever think about the profile of your readers? Who reads and who should read your books?

That depends on the book. The main character of the YA novel I’m writing now is a bisexual seventeen-year-old girl, and my fantasy is to have a lesbian or bisexual woman of more or less that age read the book and tell me that I captured her feelings exactly and she couldn’t believe the book was written by a man (gay, though neither bisexual nor lesbian).

10. Do you have any advice for writers just getting started?

My advice would be the same that any sensible fellow writer would give: keep your day job! This is only a full-time career for a tiny number of authors.

11. What is the best advice about writing you have ever heard?

A pretty good one is Paul Valéry’s, “A work of art is never finished, only abandoned.” In other words, don’t imagine you’ll ever get the work of art to the point where you say, “It’s absolutely perfect in every respect.” Eventually, you just have to say, “It’s not perfect, but I can’t improve it anymore, so I’m going to consider it done and move on.”

12. Do you have any personal advice to add?

My advice, at least for fiction writers, is to keep a journal. Especially when we’re young, the present seems very familiar. It’s hard for us to grasp that it will change much. In fact, someday it will become a mostly lost world. We won’t be the same person, with the same thoughts and feelings, and the world around us will alter in ways we can’t imagine. So we should make as complete and detailed a record of the present as possible.

I’ve read a lot of published journals, and for me, the main mistake of most journal writers is that they go into detail about their thoughts and feelings and skimp on concrete elements, like what they saw and exactly what they and other people said. I recommend writing a journal in the style of a story or a novel, with a lot of scene setting, physical detail, written out dialogue. A good detailed journal can be a mine we create for ourself as a writer and that we can dig into later for material.

12. What do you do when you’re having trouble with a piece you’re working on and feel discouraged?

I remind myself that the periods when I find my writing unsatisfactory are very important. That’s when I’ll do all the cutting and changing that I need to do, when I’m out of love with a piece. A writer needs to be fickle, and fall in and out of love with his work, because both states serve a purpose.

12. How many books do you read annually and what are you reading now?

I don’t read nearly as much now as I did when I was a young bookworm. At present I’m reading Eric Ambler’s The Schirmer Inheritance – another mystery! I read it in English years ago, and now I’m reading it in a French translation. This is my odd way of getting myself to read in another language, to read something I read in English and liked, and where I already know the story.

14. What is your opinion about the publishing industry today?

Please don’t encourage me to rant and rave!