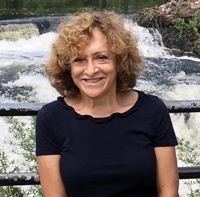 Every year on the anniversary of the death of my mother, Florence, I struggle with the same dilemma: Should I light a yahrzeit candle in her memory, or not?  In Judaism, the yahrzeit candle is traditionally lit in memory of a loved one’s passing and is burned for 26 hours.

Mom died nearly 30 years ago, on September 15. In all those years, I have never lit a yahrzeit candle in her memory, or in anyone else’s memory for that matter. While I consider myself a spiritual person, I am not religious. I have not observed religious holidays or participated in any religious rituals for too many years to remember.

Mom wasn’t particularly religious in her later years but when I was young, I remember huge family parties at holiday time, visiting the synagogue on the High Holy Days, attending Hebrew school, and Sunday school. I was actually a pretty good student, too, and was studying for my Bat Mitzvah. After junior high school, however, I lost interest in continuing religious school. Mom never made an issue of it since my Dad had recently died and I didn’t see the point of having a Bat Mitzvah if he couldn’t be there.

The decision to not light a yahrzeit candle for Mom wasn’t, and isn’t, based on any lack of love for her. She was not only my beloved mother but a best friend, despite the fact there was nearly 40 years between us. I would often tell her that even if she was not my mom, she would still be my friend. She told me that was the most wonderful compliment I could ever pay her.

Mom charmed everyone she ever met and many of my friends have vivid recollections of meeting her. One friend who came home with me one spring break recalls Mom cleaning out her clothes closet and giving bags of like-new clothing to both me and my friend as well. This was her first time meeting my mother.

Another friend from college visited one day and Mom burst out of the kitchen to greet him, skating on a pair of roller skates. Others remember her joy of living, her outrageous sense of humor (often bawdy), her willingness to listen to your troubles without being judgmental, and her penchant for fashion.

Mom’s passion for clothes, accessories, and shoes led her to seek employment as a salesperson in Bloomingdale’s, in the now-defunct Young East Sider department, which specialized in trendy women’s apparel geared toward a young, hip crowd. Mom once made a wisecrack that the store needed an Old West Sider department for older, but trendy, women.

Most of her paycheck went to purchasing clothing and accessories from Bloomingdale’s. Mom would always defend her habit, saying that everything she bought was purchased through her employee discount. She embraced the latest styles, including many styles I avoided, like gaucho pants, culottes, or leather pants.  She frequently accused me of being too conservative.

After she died, my brothers and I would discover dozens of boxes of shoes, unworn, still wrapped in tissue paper in their boxes, everything from dressy heels to casual platforms to fancy beach sandals. There were as many blouses, skirts, and dresses hanging in her closet (as well as in all the other closets in the house) still bearing the original price tags. Her philosophy was, “You never know when you might need it.”  Mom’s closet became mine on the rare occasion I needed to dress up and she was more than happy to share.

My biggest regret in life is that I didn’t have more time with Mom.  She died at the age of 72, the victim of amyotrophic lateral sclerosis, ALS, or more commonly known as Lou Gehrig’s disease. I prefer to call it the cruel disease. ALS gradually atrophies its victims’ muscles, leaving most people confined to a wheelchair. The mind, however, continues to function normally in most people, Mom included. There was, and is, no cure for this dreaded disease and most people with ALS die within four years of diagnosis.

Not a day goes by when I do not think about Mom in happier times, wishing I could call her on the phone and hear her voice one more time.  I have a terrific group of female friends, but I no longer have a mother figure in my life with whom to talk, ask for advice, or share good news as well as not-so-good news. She is simply irreplaceable in every way.

So, as my reasoning goes, why should I light a memory candle on the anniversary of my mother’s death when I think about her every single day of my life?

One day, my sister-in-law, who is more like a sister to me, mentioned that she was lighting a yahrzeit candle in memory of her father, who passed away the previous year. I mentioned that I didn’t light yahrzeit candles. She asked why. “Because I am not religious,” I answered.  “But this is more about tradition than religion,” she shot back.

Intellectually, I understood what she was saying. Yes, it is possible to embrace the traditions of one’s heritage even if you don’t embrace the religious aspects.  But it seemed like such a leap for me.  I am 62 years old.  Why start now?

Although I often wish I could talk to Mom, hear her comforting voice, and see her beautiful face, that desire was especially strong this year, 2020.  This year is not just about a horrible virus that continues to sicken and kill millions of people all over the globe, but about racial and civil strife, fires and floods that destroyed people’s homes and lives, and the loss of too many livelihoods to count. Depression and loneliness, which have always been with us, are amplified this year, brought on largely by social distancing. Being socially distant is certainly necessary during this time but it is not without consequence.

I wonder how Florence would handle something like this. A social butterfly, would it destroy her, or would she somehow find a way to cope?  I can’t picture Mom using Zoom, although I do think she would be in awe of much of today’s technology, especially online shopping.

If she was alive, she would be terribly concerned about me if I were still taking mass transit into Manhattan. Most likely, she would be calling me several times a day to check on my well-being, while updating me with the latest facts and figures about COVID-19. To think I used to get annoyed with calls like this.

It was one of those lingering, picturesque, mid-September days. The sky was a deep blue, and the air was warm enough not to need a jacket, but leaves were beginning to crunch under your feet. I was having a socially distant get-together with some gal pals, just four of us gathered at a picnic table in a local park.

As I sat among friends, I felt a rush of warmth wash over me. It felt good to be with people I cared about and who, likewise, cared about me.  We spent the afternoon reminiscing about our youth in Montclair, New Jersey, laughing, and gossiping.  One friend, Lynn Marie, even brought some wine, which is illegal in New Jersey parks, but what the heck? That was our attitude about everything in the year 2020.

We sat around the parched, wooden picnic table adorned with a hummus and veggie platter, homemade chicken salad with red grapes, assorted cheeses, and crackers.  Lynn Marie had taken the time to decorate the table, adorning it with a gold-colored cloth, miniature pumpkins, and candles. I praised her efforts and she just downplayed it, telling us how she just ran into a nearby supermarket and grabbed whatever she could find.

On closer inspection, I noticed that the three candles on the table were yahrzeit candles. I started laughing and she asked me what was so funny.  I told Lynn Marie, who was raised Catholic, about the significance of the yahrzeit candles. At first, she was shocked, but then she burst out laughing at her faux pas. I then mentioned that this was the day before the anniversary of Mom’s passing. Without missing a beat, she grabbed the one candle that was unlit, and put it in my hands, and exclaimed, “Take it!  You must light this for her tomorrow.”

So, on the eve of September 15, a yahrzeit candle, presented to me by a Catholic woman, glowed from the depths of my white porcelain kitchen sink, until sundown the next day.

I like to believe that Florence had a hand in making this happen. It almost didn’t happen. We had trouble agreeing on a date and place. Originally, there were to be six of us, but two couldn’t make it. We almost called it off but with winter looming on the horizon, we didn’t know when we would be able to do something like this again during the time of COVID.  All I knew was that it was important that I be there that day.

Martta Kelly is a medical writer and editor who lives in West Orange, NJ, with her husband and three spoiled cats. She is a published poet whose work has appeared in numerous literary publications.