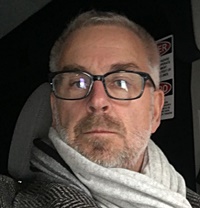 Father’s paints are still piled up in the garage. The bay is full of’em. Stacked up. No
reason. No pattern. Just piled up. Quarts on top of half gallons. Half gallons on their sides.
I like the garage. It’s all so random.
The cans have hardened paint tracks running down their sides. Little rivulets frozen in
time. They’re like road signs. They tell you what color’s inside, if it’s flat, or maybe eggshell.
When Father was still around I’d go into the garage and find the freshest cans of paint,
trace the tracks down their sides, pop the little bulbs of thick half-dry paint at the end of the
rivulets with the tip of my finger. I loved the feel of the sticky white splotches that formed on the
underside of my finger.
That was all before. Before I learned to balance the spoon on the lip of the bowl and plant
the handle in the drain. Before I learned to love the clattering sound in the strainer and the
Acting Out / Quinn / 6
counterweight thumping in the cabinet.
#
“Animal?”, Father said. “So now I’m an animal?”
Mother glared at him. “You eat like an animal,” she said, “and you treat me even worse.”
Father stopped chewing, threw his fork down on his plate. “I’m an animal now, and I
don’t treat you right? Is that it?”
“Go upstairs Martin,” Mother said, not even looking at me.
Father stood up, straddled his chair.
“Upstairs!”, she screamed, “now!”
I didn’t. I stayed right where I was, in my chair.
Father grabbed his dinner plate and hurled it at Mother’s head. She tried to cover up,
raised her arms just as the plate struck her forehead and opened a nasty gash above her left eye.
The plate crashed to the floor, broke into a hundred pieces. Sauce everywhere.
I’d never seen so much blood.
#
Thiebold drinks Diet Coke. Gallons of it. It’s a diuretic. The man must have a bladder the
size of Montana. He drinks from a big tinkling glass full of ice.
“Marrrr…tin,” he says, drawing my name out.
I could tell him all about the night Father left us. I picture it. Run it through my head over
Acting Out / Quinn / 7
and over. The blood was fascinating. It dribbled down the side of Mother’s face, slowly at first, a
trickle. A few droplets hit the floor. Then the flow increased and the blood began to run. It ran
down her cheek, seeped into her hair, channeled in the grout between the tiles.
Father, that pig, stood over her. Pulled the bib up over his fat belly, slipped the hoops
back over the metallic studs. He squatted down, studied the gash, the blood, Mother’s pale face,
and started humming. Humming. A deep, surging, painful sound. He was focused on that sound,
trying to ignore the hurt he’d caused. Maybe it was the only thing that kept him from hurting her
more.
I watched it all from my seat. Silent. A bystander. One step removed.
He straightened up, kicked a chair out of the way. The legs scraped across the floor. The
chair fell over backward with a crash. He looked at me, turned, and walked out. Left. Vanished.
Through the back door.
I just sat, watched him leave.

Brian Quinn is a TV News Journalist living in Manhattan who Spent 30 years covering news in this city, also traveling overseas. Many of his pieces are driven by my news experiences.