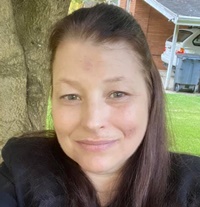 The only way that Faye could deal with losing her baby boy was to imagine that some sweet barren couple had taken him out of desperation. Absentmindedly she rubbed the scars on her wrists, to think otherwise was just not good.
She welcomed the solitude even relishing the happy moments of her once fairy tale life. She had it all, the beautiful Victorian mansion in the country that was surrounded by canopies of lush green majestic trees astir with the sweet aroma of the tiny forest flowers enveloping the earthy scented moss that covered the ground like a thick shag carpet., Her husband was the new Van town doctor and she had Timmy.
She sipped her coffee and looked around the room. Her eyes were always drawn to the old, outdated calendar that she could not put away. The date circled on the calendar was decorated with faded doodles of a cake and candles. Seeing this brought back all the memories of a little boy’s birthday that never happened. She looked at her watch, she wasn’t due in court for two more hours. Pulling the scrapbook from its hidey-hole, she opened it and surrounded herself with happy memories of her little boy. Closing her eyes, his high-pitched giggle filled her head as he ran around the backyard. Absentmindedly, she reached for her coffee, the cup fell from her hand and as the steaming hot liquid touched her skin she jumped and all the newspaper clippings that she had saved throughout the years about her missing son spilled out all over the floor. It had been eight years now since Timmy had disappeared from her home. she scooped them up, opened the scrapbook and shoved them inside.
Doug had filed for divorce. today it was going to be final. Doug had been able to get on with his life, somehow. He had met someone new and they wanted to marry. I guess it is for the best, all we do is hurt and blame each other. She was going to get her money’s worth out of her therapist this week, that was for sure.
She knew that someday her son would walk through her door She had never changed her phone number, and she never moved because how would he know where to find her? Time just stopped for her the day her son disappeared. If she had given up like Doug had, then when Timmy came home, he would be alone. No one promises you a happily ever after, she thought, as she turned the key in the lock.

She can still remember fragments of the first few months after Timmy disappeared. The noise from all the reporters trying to talk all at once, always asking the same questions over and over, the dogs, the constant ringing of their phone with alleged sightings. The police followed up every lead, but nothing came of them. Some were people trying to get their minute in the limelight, for other’s it was just a case of mistaken identity. The onslaught of questions from the police, the search parties and all the strangers in and out of her house touching all of Timmy’s things. They went through his dresser drawers and even his toybox. What were they hoping to find in a little boy’s toybox? Blinded by the constant flashes from the cameras, they took enough pictures to fill a scrapbook. Later all the pictures became newspaper clippings which Faye had collected and safely housed in her scrapbook. She wanted to scream at them to stop manhandling her son’s toys and clothes. She refrained and kept silent hoping they would uncover a clue that maybe she had overlooked.
Every day for what seemed like months she and Doug scoured the neighborhoods, the parks and even the woods by their house. They stopped everyone they met. Thrusting a photo of a happy little boy in front of their faces. “Have you seen my son,” Faye asked. She tried to ignore the snide comments until she had enough.” Blame whomever you want, just please help me find my son.”
Doug threw himself into his work. Every time he performed a surgery on a child, maybe some doctor somewhere else was doing the same for his son. He worked as much over-time as possible, anything to keep from going home. They were pretty much just roommates towards the end. Faye remembered that one day, there was nothing left to say so they just quit talking.

“Have a nice life,” Faye said. She harbored no animosity; she wasn’t angry anymore. She just didn’t care. This was the end of a chapter in her life.
She had bigger fish to fry, the local TV station was doing a piece on missing children next week and she was their star speaker. Maybe her scrapbook and telling her story would jog someone’s memory. Leaving the courthouse, she smiled, maybe Timmy was coming home.

Jacqueline March: I started writing four years ago. Currently I have self-published three novels (Gone But Not Forgotten, forbidden Empire of Secrets and Fate’s Cruel Trick.) I am currently working on my fourth novel. All my books are available on Amazon.com