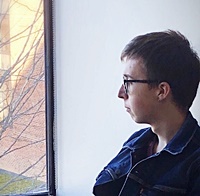 It was going on three years since Adelaide, Addy, for short, had been gone. Maybe it was her decidedly cat-like nature, but part of me thinks when you’re born into a family, or whatever, with a pet, as I was, you just can’t love it quite right. It’s there, and you want to… But you just can’t.

Anyway, it was going on three years since Addy had been gone. It was late July and I was aimlessly ambling down the pebble-scattered dirt road that served to sequester away our poor excuse of a house, and even poorer excuse of a home, from the pond that glimmered like distant galaxies across the way.

Suddenly, what looked like a small bulldog broke from the unrelentingly uniform underbrush, head down—charging; and then, just as suddenly, it stopped…and, looking upwards, perceived my presence as I just had its. Lonely dog, lonelier boy; a fleeting moment of communion. And then, after prancing besides me, sharing several strides it was gone, back to the brush… And I was on my own, on my way…

This became peculiar routine—walks, me and the collarless stray—until, finally, I decided I had to name it. This involved a check of its underparts, a process she didn’t much like. But she was a she and so I decided to name her Lauren…stupid name for a dog, I know, but she snorts and no name I could conjure rhymed with “pig.” Thus she came to be known—in our army of two—as “Laur Boar.”

More than anything, Laur Boar was given to an ardent curiosity about the world that surrounded her. I can remember one such excursion on which she dove into the brush I assume she called home. I thought that was it for the day when her head popped back out, jaw clenched around a hot dog bun. As she devoured the discarded delicacy, I chuckled—almost instinctively—“You’re a bad girl.” At this she just looked up at me mischievously.

And then there’s the last time I saw her. It was a seasonable night in late August and we were down by the pond. I had started a fire; sparks flew, fueling kindling and in time flames came to blaze deep into the dark night’s sky.

Laur Boar was curled up in my lap—our shared warmth warring against the change of season. Her face had turned from my gaze but I could feel each heartbeat as well as each in- and ex-hale.

But the only response was that lonely sizzle of ember and ash as the fire fizzled out and faded away into the cold, empty night. What to do? Dirt road aside, all that stood between the relative warmth of the hovel across the road and this place from which the intimate glimmer had gone was me, the wait, and my ability to endure the inevitable uncertainty…and heartache that could follow. So I stood.

Aymon E. Langlois is an award-winning writer, aspiring academic, and—in his words—”lover of [his] tribe.” He has had the honor of being published in The New Currency as well as Canvas. Originally from the Boston area, Langlois currently attends Skidmore College in Saratoga Springs, New York where as a member of the Periclean Honors Forum, he is pursuing a Bachelor of Arts in English. When he’s not otherwise engaged Aymon enjoys running, music, theatre, and passing time with friends and family. You can find out more by visiting his website (aymonelanglois.com) or following him on Instagram (@aytypical.typeset).