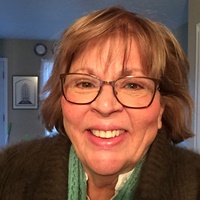 Age is Creeping Toward Me

Like the Old Maid
in a children’s deck of cards,
it was hidden, going round and round
the table until the last card:
a dowdy, with a misshapen hat.

Like a spider web
not seen on a morning walk,
it was brushed away
quickly.

It is like a fisherman’s net
hauling from the sea
all that life
which gasps at
the surprise of it.

There are so many other cards:
the master magician, the ballerina,
the balloon man, the lady clown,
the laughing lion, and the perfectly
trained seal balancing a red ball
on its nose.

The little girl etching
her name on the frost-filled
window still doesn’t understand.

I can tell no-one, except this poem

I would forgive all
forget all

to have you next to me
again. You have disappeared
into the longest night, are lost
in uncharted waters.

Fathom a love like this:
deprived of your body,
my most intense wish
is to see you in a dream.

Driving through the Hunter’s Moon Night

1.
If I held my hands out to the hunter’s moon,
they would seem empty
but even after prodigious soap,
long bath, and two hours of driving
through the night’s cindered landscape,
our lovemaking is still in my skin,
giving back silhouettes of what we held.

Of the rules of this earth
this is one: heat rises, ascends,
so our lovemaking joins the scents
which from the first
were heaven-bound: tasseling corn,
August’s rasping field, unnamed burning grasses,
the grain in the neighboring barn.

2.
All our hurtling toward each other—
over state lines, against all measurements,
all which is contained:
miles, speed limits, hours—
to be alone in one room
could have only become a collision of two bodies,
our attempt to defy physics’ canon:
no two bodies can occupy the same space
no

matter the velocity at which they approach.
Only the night’s starry dome stayed in one place
as we tried for hours to displace the space
between us in one small bed.

Susan Waters started out as a journalist covering hard news in upstate New York and for 13 years was a magazine editor and writer. Her publishing credits are extensive. She has won 10 prizes in poetry and has been nominated twice for the Push Cart Prize in Poetry. Her chapbook Heat Lightning was published in 2017 by Orchard Street Press. Currently, she is Professor Emeritus at New Mexico Junior College.