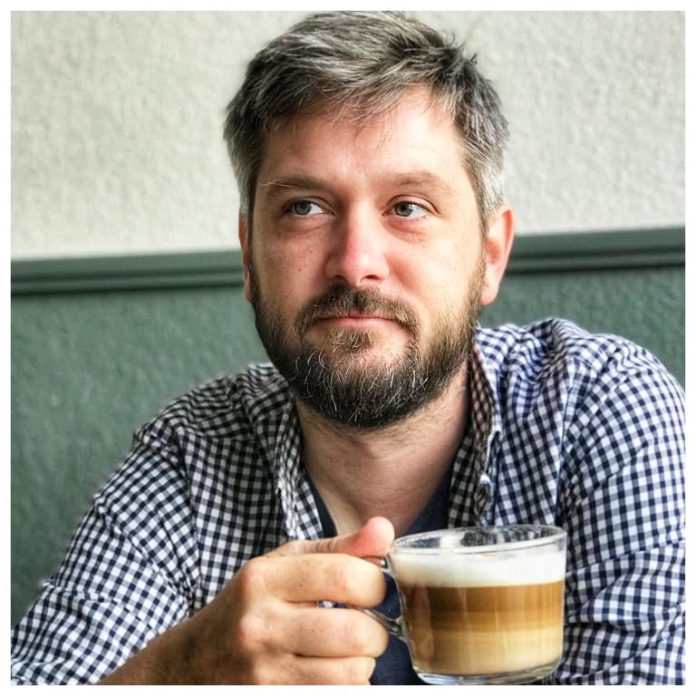 I am in the process of forming an obsession with funghi. We just moved up into the mountains. I am still a cautious forager, but I am becoming more and more interested in all the varieties of mushrooms that grow on the mountainside. I’m really interested in the symbiosis of the pine forests roots and the networks of funghi that connect them. At the moment this just involves a lot of walking around in the woods an marveling at it all. After so many years of urban living it feels a little like coming back to life.

I was always writing something as a kid. Usually, I wrote strange stream of conscious poetry that didn’t make much sense to anyone other than me. I have notebooks full of that sort of thing. Occasionally it tried to become a narrative. Often about basketball, which I was obsessed with as a kid. I don’t think I realized at the time that the poetry was practice for what I would write later. It was just something I did. I drew more than I wrote. I had a picture of Mikhail Gorbachev published in the local paper in Augusta, GA when I was in 5th grade I think. The first thing I “wrote” was a short picture book about a young raccoon that needed to avoid talking to strangers when I was 6 or 7. I think I still have it somewhere…

Big Sky is my most recently published book. It was inspired by the 1921 race massacre in Tulsa, which had always been on the edge of my consciousness. I was born in Tulsa. My brother, sister, dad, grandparents on both sides, and all my uncles and aunts spent most or all of their lives in or near Tulsa. When my mom moved us to Chicago, I realized quickly how exotic the South was to Northerners. Most people who grow up in the North never visit the South other than Florida or maybe New Orleans. There are a lot of prejudices and misconceptions about what it means to be from the South. I had distanced myself from that part of me, but when my father went into the hospital before he passed away, I went back for an extended period. It had been probably 5 years since I had been to Tulsa or seen my family there. I was in a vulnerable state, reconnecting with the place, with my siblings, and mentally preparing for the impending loss of our father. One day I left the hospital and went down to Greenwood. I wandered the area that had once been this vital center of black wealth, this place that had been called Black Wall Street, and saw almost nothing that even referenced it. I went to the museum dedicated to the memory and wandered through the exhibits. The event felt like it epitomized so much of the violence and misunderstanding that has marked American life. I started writing almost immediately after my father’s funeral when I got home to Madrid where I live and teach literature.

Well, I started in 2012 and published in 2020, but that is not indicative of how long it took me to write. I believe I was actively writing for the better part of 2012, then it sat on a shelf until 2018 when I was convinced to submit it. I edited during the quarantine between March and July of 2020. I usually aim to write 2000 words a day. That is an aspiration more than a reality! I get there at least 3 times a week I would say. I alternate between fiction and academic work.

Writing is kind of an unusual habit in itself I think! The only thing that comes to mind is that I am almost always, as I mention above, working on an academic and a creative project simultaneously, and the two tend to inform one and other. I have a book coming out with Routledge in January on Shakespeare and ecocriticism which very much informed the character of Dr. Kane in Big Sky, for instance.

I play guitar and write songs, but only as a hobby.

Where to begin… Right now my favorite book is probably Richard Powers’ The Overstory. I am a big fan of Jeanette Winterson. Recently I have been reading Barry Lopez, Robert Macfarland, James Rebanks. I have been slowly working my way through Lucia Berlin’s stories. Savoring them. I am a huge fan of Rebecca Solnit’s essays. Likewise Kathleen Jamie’s. I teach Shakespeare and Milton, so they always find their way into whatever I am thinking about.

I have a novel in the works. I am about halfway through. I am also working on some journal articles that will hopefully add up to a new academic book. I am hiking a lot too, so that has led to a lot of nature writing which I hope adds up to something. I always have some poetry in the works too. Poetry is, for me, the way in.

I am happy for anyone to read my work, but no, I don’t actively think about who I am writing for… I probably should! I always tell my students to be aware of their audience. I suppose in my academic writing there is a more finite awareness of the reader. With fiction, so long as it’s not genre fiction, I think it is hard to have more than a sort of amorphous notion of the consciousness that you would like to connect with. In the end, in my case anyway, I just hope that someone connects, that it’s not a shout into the void.

As a literature professor I have to read quite a bit, but I am not sure I could put an annual number on it. I am always reading 2 or three books. I like literary fiction, and non-fiction dealing with the natural world. I read a lot of Early Modern drama and poetry, because that’s what I teach.

I hope that I am telling stories that speak to the connective tissue between humans and the natural world. I want people to consider how narrative itself arises from nature. I want to get at the idea that our bodies are encoded and textual.

I think you have to write the stories that come to you naturally and ignore the trends. A body of work is bigger than any one book or story and that is something you build over a lifetime.