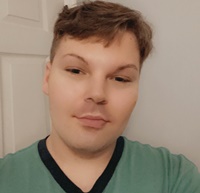 Dead to Me
by Tailyn Augustine

The sun was out, but it didn’t provide any warmth; the chill of autumn crept into my body. The sounds of wildlife or at least the rustling of leaves from the wind usually filled the woods. Today, however, it seemed as if the animals had all fled, and the forest itself held its breath.

I’d told him, finally, and he hadn’t taken it well. We mutually decided to come out here to talk. Everyone else never liked to see us argue. My whole body had tensed into its fight or flight mode; it’s hard to believe you can feel that way around someone you used to have such a close relationship with.

“Why are you doing this?” he asked. He did his best to prevent any emotion from escaping him, but I’ve known him long enough to understand that just meant he was mad anyway.

“I understand that one of your ‘friends’ has talked you into thinking you’re a transgender or whatever. You’re not. You’re fine just the way you are, as Lane.”

Hearing that name was like getting stung by a wasp, but I shook it off.

“My friends didn’t do anything. I’ve been figuring this all out before I even started hanging out with them,” I said. “And I know you’re far from the accepting type, but you could at least be respectful.”

“Respectful?” A crack appeared in his mask, letting the anger that’s festered come seeping out. “We’re supposed to be brothers, twin brothers. We’re a duo. You’re trying to throw that all away!”

I took in a deep breath and sat on the ground, grabbing handfuls of grass as if they would keep me from running from this. I shifted my gaze to the surface of the nearby lake through the trees to avoid looking at my brother.

“We’re still a duo. We always will be. Nothing will ever change that.”

“Well, you’re letting whatever the hell is going on with you change it! Why didn’t you ever talk to me about this? You said you’ve been figuring this out for a while now. How come this is the first I’ve heard of it, huh? I thought we told each other everything? I thought we trusted each other.”

“Well, I guess I didn’t trust you with this! From how it’s going so far, I think I had the right idea!” I shouted back, desperately wanting his barrage to be over. I knew I’d made a mistake as soon as I’d said it, though.

He kicked up a storm of dirt directed at me. Tears were forming in the corners of his eyes.

“Can you not see how this is already making things worse between us? Please, for the love of God, don’t throw your life away.”

“You’re the one making things worse,” I said as I stood up and brushed the dirt off. “What I’m trying to do is live my life. I didn’t spend years digging up parts of myself just to bury them again.”

His face morphed into one of his famous glares. He’d balled his shaking hands into fists.

“You can have this or me, but you can’t have both. I won’t be a part of it; I won’t associate with those kinds of people. If you choose this, you’re burning this bridge. You won’t ever see or hear from me again; you’ll be dead to me.”

I wanted desperately to cry when I heard that, but the tears wouldn’t come. If that was how he felt, there wasn’t any point dragging this on. My eyes turned downcast, and I simply walked away.

The chill suddenly felt colder. As if my heart had fallen into a bucket of ice water. The wind of the forest had returned, although nothing more than a whisper. My crazy imagination thought that maybe the woods had been listening and was trying to comfort me with its presence.

He must’ve been shocked that I left. After some time, I heard him shouting at me, calling out that name, Lane. That wasn’t my name anymore, though. Lane was just as dead to me as I was becoming to my brother. He never really existed. My name is Laurel.