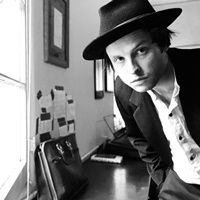 Chris Viner is a writer based in Los Angeles. He is the author of Lemniscate (nominated for a Pushcart Award). His work appears in Colorado Review, Critical Read, Culture Trip, The Festival Review, The London Magazine, and Woven Tale Press, among others. He holds degrees from Goldsmiths, University of London and St Anne’s College, University of Oxford, where he was a recipient of the Pasby Prize for his writing. He is poetry editor at Twin Bill magazine.