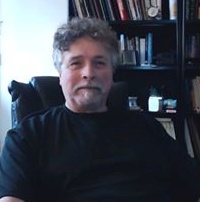 With a tip of the hat to Sam Kinison.

I think about Frankenstein, the mummy, zombies, ghosts,
vampires, Nosferatu, poltergeists and revenants. All of them

died, but somehow became undead. They haunt our dreams
and waking hours because they challenge the natural order of

things. Death and taxes, they say, are permanent and inevitable.
So it is our instinct to fear something that was once dead, if it

becomes reanimated in this world. One notable exception is
Jesus Christ. Jesus is the only one I know of who came back

from the dead and didn’t scare the living hell out of everyone.
Of course, he made most of his post-crucifixion appearances

to his disciples and people who knew him. And those people
were glad to see him and not afraid. But I wonder how the

Roman soldiers would have felt had they met him strolling down
the road to Emmaus several days after nailing him to the cross.

I can certainly imagine their screams as they beat a fast path
back to the city, swords and armor clattering in hasty retreat.

When I Taught Metaphors to My Son

We talked about similies and metaphors almost every night. Even at seven
years old, his appetite for figurative language was insatiable. We started
out with a blanket of snow, a lake like a mirror, the world as a stage and

crawling toddlers as rug rats. From there, things got more complex. When
we read books together, he or I would always point out the similes and metaphors.
In some ways, I had created an anomaly, the only boy his age on the block

who appreciated figurative language, while the other children still read books
literally, watched cartoons and played with their Super Soaker squirt guns.
One day, my son and his friend Andrew, had built an army tank out of some

empty moving boxes. Had they thought about it, the whole enterprise was an
exercise in figurative language. There were rectangular armored walls made
of cardboard with trash can lids tied on the sides for wheels. Sitting on top was

a gun turret with a broom handle sticking through for the barrel. They sat inside
and surveyed the neighborhood for enemies through narrow window openings.
When they rotated the turret and fired the gun they hit an old bass drum inside

the tank as if it was the report from an artillery piece. When the imaginary enemy
encroached near the tank, you could hear the rat-tat-tat of the onboard machine guns
from the mouths of the children. But, they were so focused on the war that they didn’t

notice the dark clouds moving in fast from the west, and as the heavy rain soaked
the cardboard, the turret began to bend and fold. The side walls buckled and the
broomstick fell out of its hole. Andrew tried to hold the tank together in the midst

of the deluge and asked my son for help in saving it. And it was then that my son
replied “It would be like rearranging the deck chairs on the Titanic.” Andrew, who
had not studied metaphors, just looked puzzled, as the tank collapsed around them.

When the U.S. Army created five Airborne divisions for World War II, the U.S. Army stopped training paratroopers on how to pack their own chutes and started support organizations for parachute packing and rigging. The first riggers received their training at Fort Benning, Georgia. Wikipedia

My father told me a story of his time in the Army Air Forces, during the beginning
of World War II. Part of his training, involved attending a parachute jumping school
in the states, before being sent overseas. During class on the first day, all the men

listened to lectures about rigging, canopies, shroud lines and harnesses. They watched demonstrations from the school staff. In the final hour of class, each student was given
a nylon parachute, that he had to fold and pack, according to written directions. Later

that evening, they had dinner and drinks at the officers club, and most got to bed by
ten o’clock. As the last few stragglers came in, they brought with them the rumor, that
the next morning, the men would make their first jump, using the parachute they had

packed in class. When everyone was in his bunk, there was a period of silence as they
lay in the dark barracks. Then, one by one, each man silently got dressed and snuck
out to the hangar, where they had stowed their chutes from class in lockers. My father

was one of the last to get up and walk to the hangar. When he got there, the hangar
deck was littered with men unpacking the parachutes they had previously folded in
class, and using the class handouts, carefully repacking their chutes for the next morning.

My father was a very self-confident man. He believed he had packed his chute correctly
in class, and was about to return to the barracks for a good nights sleep, when even he,
abruptly changed course toward the locker room. Suddenly, the parachute rigger

instructors appeared from a side door, doubling over with laughter, at a prank they
pulled on every class. It was a time when the generals said, all parachutes would
be packed by certified riggers, so no soldier would ever have to prepare his own

chute again. My father never appreciated the joke at the time, and developed
a dislike for parachute riggers. But, six months later, he was riding in a B-17 over
Europe taking reconnaissance photos, when two of the four engines were hit by

anti-aircraft fire. He did two things that day. He promised the navigator that he
would quit smoking if the plane ever made it back to the base. And then, patting
his parachute, he said he would never utter another unkind word about riggers.

I’ve never liked working in the yard, especially in hot, humid Alabama. I don’t even like
to be outside grilling a steak, and I certainly wouldn’t eat a meal at our patio table in the summer heat. I like air conditioned spaces, free of insects and sweat. On the other hand, my wife loved

working outside with plants. She created a beautiful yard from scratch, covered in pine straw,
with bushes and plants she carefully selected. Don’t get me wrong, I always did my share in taking care of the swimming pool, home repair, helping my wife by digging holes and hauling

rocks with the wheelbarrow. I even put in an irrigation system, digging trenches and gluing
PVC pipe throughout the property. But, once the yard was finished, she took care of all the maintenance. She used to kneel reverently on a foam pad, pulling each weed, putting

it in a lawn bag for a final trip to the street. That was something I could never imagine doing, unless I died, went to hell, and that was my assignment from Satan himself. Ever since my
wife passed on, I’ve neglected the weeds, and they’ve taken over the beautiful yard she

created from an unused field. I know, it’s my fault the yard has gone to seed, and now I’m paying the price. So lately, I walk reluctantly into the yard, dressed with long sleeves in the summer, old jeans, and sweat socks pulled up over my pant legs to prevent bug bites, ready to

commit serial herbicide. I spray myself with the acrid scent of Deep Woods Off, as if I was a guerilla fighter in the jungles of South America. Awaiting me are all kinds of weeds, fleas, ticks, gnats, chiggers, snakes, thorns, and poison ivy. I hate all of these things and what it takes to get

rid of them. My clothes are soaked after ten minutes of work and my glasses steam up with sweat. So, I decided to rely on technology to make the job less daunting. I have a heavy duty mower on wheels that takes down anything green, including some plantings I should keep. With

that mower there is no measuring twice and cutting once. I just carve a swath through the weeds
producing a cloud of dust, fleas and ticks, not wanting to stop and determine the genus and species of everything in my path. I have an attachment for my electric drill, a long metal rod

with a claw on the end. I stick it into the weeds and it rapidly winds the vines into a tight bundle I have to remove with a box cutter. I love to watch the vines winding around the claw, slipping
toward me through the foliage, like when a kid slurps a long strand of spaghetti. Now, I know

there are people who don’t believe in spraying herbicides, and to them I say, “Save the environment on your own time! I’m ready to do whatever it takes.” I found a spray called
Crossbow, allegedly used in making Agent Orange during the Vietnam Era. I mix it in a sprayer

on wheels, with a battery powered pump, to rain death from the sky on every weed. Unfortunately, I inadvertently strafed three hostas, and some ferns that fell victim to friendly
fire. The only thing I have against Crossbow is that I can’t see the weeds die immediately.

I have to wait for several days to see them gradually wilt and turn brown. I want to be like Johnny Cash in Folsom Prison Blues, experiencing the instant joy of shooting a man in Reno, just to watch him die. Last week, I bought a flame thrower, with a cart to carry a twenty pound

propane tank, a ten foot hose and a long-handled flamer. I like to think of myself as a character in a Tarantino movie killing Nazis. The power is intoxicating. The flame thrower immediately withers any weed, and kills it to the root. I relish the instant shriveling of these green interlopers,

destroying their leaves, interrupting their photosynthesis. Unfortunately, I lit my yard on fire several times, once in an area with no hose nearby. So I had to dance around on the burning
pine straw stamping out the fire, which unfortunately consumed two azalea bushes and a

hydrangea. Sometimes, as I kick the ashes from my Nikes, or sit sweating on a garden bench, regretting the death of a legitimate plant, I sense my wife is watching and laughing at me. And
that doesn’t bother me, I know I’m doing the best I can, and I always did enjoy her laughter.

Sonnet for a Divorcé

At the end, he was an angel too far
from heaven, bones frail as a hummingbird,
weakened as the glow of a single star
receding through the darkness of space, blurred,
growing ever dimmer as miles are crossed.
He greets his death as a farmer welcomes
sunset, his work is done, and he has lost
the will to continue. When the end comes,
he doubts if there really is a heaven
above, but if it’s true, there is the chance
it will frown on wives numbering seven,
and Saint Peter may look at him askance
and slam the gate, his lifetime disparaged.
Can hell be worse than seven marriages?

William Ogden Haynes is a poet and author of short fiction from Alabama who was born in Michigan. He has published seven collections of poetry (Points of Interest, Uncommon Pursuits, Remnants, Stories in Stained Glass, Carvings, Going South and Contemplations) and one book of short stories (Youthful Indiscretions) all available on Amazon.com.  Approximately 200 of his poems and short stories have appeared in literary journals and his work is frequently anthologized. http://www.williamogdenhaynes.com