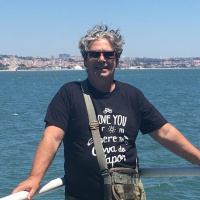 Pegasus
When spring comes and the winged wind brings it
the seeds of life and the boldness of the harbinger of creation
the wonderful sublimation of matrices that heal
in a cosmic dance provided in the attraction of opposites
flashed by the source of Pirene, when in the drought
offered honey cakes to the diviners of transactions
bold that reverberate in spiritualizing the day
from the destabilizing metaphors of ignorance to half
like the absurdity of cutting off the head of an earthworm
and it will grow a new one, regenerating itself
or rubbing the surfers’ rectum to create antibiotics ~
with seawater creating superbugs that eliminate
degenerative diseases by neuro formic engineering
by the brain enhanced by the rays of the head-eye.

Cygnus
Leda was dressed when in disguise Swan captivated her
and in the silky fragrance of his wing he let himself be carried away
experiencing periodic explosions of an unknown nature
in the vertigo of the dark cloud, birthplace
of young ambiguities that seek to be the sum
relative to the northern cross when the seasons begin
to the brightest star goes the rising glory
look for the most resolute way that there can be
in the celestial domain that enthroned the speech of birds
whose algorithm generated the dichotomy of depression in Gemini
between the uproar and the exuberance installed in the hypothalamus
of generations traumatized by the bad government that makes them unhappy
carry amino acid memories of star filaments
in a diaspora brought in long ago, at the moment of the Universe.

Gemini
They were children of different parents but they had the same shape
sometimes indolent and capricious, sometimes versatile and vigorous
lived in a kind of congenital limbo since childhood
when they were surprised by lights that came from the sky
and started to fight like they were in a terrible battle
getting the body marked, visibly electrocuted
and the lights came and went quiet now, then static
digging over the house wheezing noises of spectral gravitation
the brothers staying in a stately suspension running on themselves
in a fugitive escarpment of gravity acceleration, naked
in the way they recognized themselves as dysfunctional and violent
licked by a strange excrescence that emitted
when separated from their binary brotherhood they coagulated
in a kind of unique fabric that kept them safe
so they are carried by a cloudy light on a journey
with no return, they left for Pollux for the bluish mornings of Thestias.

Aries
Thirsty for blood roared continuously over passers-by
such a vampire wandering through the night with a bronze leg and a
donkey’s feet seducing them to sleep paralysis in a numb dullness
of doubtful wisdom, hiding the problem in an eschatological dimension
of wars and arbitrarians launched by the desire for gold on a mission
suicide that calmed the nerves of a sociopath, transforming him into
psychopath and had for himself the immortal bedspread, the fleece shining with skeins
solstice fawns in an endless travel transhumance
by the conscience of morals saw fate as a desire for blood
in chaotic escape from the love that afflicted him hurting others
for pure pleasure he delights in the gold of his commiseration, moreover
foreseeing the sacrifice of your well being in the immeasurable night
that your feminine soul has descended on your body
with a zeal of enthusiasm that made him reborn to the world.

Januário Esteves was born in Coruche (1960) and was raised near Costa da Caparica,

Portugal. He graduated in electromechanical installations, uses the pseudonym Januanto

and writes poetry since the age of 16. In 1987 he published poems in the Jornal de Letras, and

participated over the years in some collective publications.