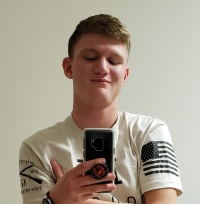 I enjoy walking home from work. The night air is filled with sounds of late-night lovers and alleyway cats fighting over the days trash. A sense of ease as life continues as usual.

The rain from earlier leaves the city with a shine that it normally wouldn’t have. Out of the corner of my eye I spot something that didn’t look right. How long has that pizzeria been there? I stop walking and stare at it. It can’t be new, can it? It might just be a no name since it doesn’t look like one of the big brands.

I shrug and continue walking, no chance they’ll be open at this hour of night. Speaking of which. I pull my phone out and check the time. I can only catch a glimpse of it before it dies at eighty percent. What? I try to turn it back on, but I’m met with a flashing battery claiming it’s empty. Maybe I saw it wrong or something. I shake my head.

As I begin to pass the pizza place, a clock that looks like it was counting down is visible from across the street. I yawn just enough for my eyes to be forced shut. The world around me goes on mute while I yawn, but once I’m done, I’m back at the beginning of the block. “I, wait what?” Heavy footsteps echo from far off.

I pause and wait to see if someone shows up. When no one does, I continue forward yet again. My feet carry me a little faster than the last time I walked through. Yet, just as the last time I walked past the pizza place I yawn. The world goes mute again, and there I am at the beginning of the block. I sprint, running as fast as my suit would allow me.

My shoes did not aid me in speed nor stealth, but the running gave me some hope. Repeatedly, I try sprinting past the pizzeria. Eventually my legs give out under me and I’m sent sprawling. I stand up and look around. “What do you want from me, I have money,” I shout. A trash can lid skitters down the road mimicking a laugh.

I yell at the top of my lungs, praying anyone could hear me. I grab the nearest object, a rock, and throw it across the street and watch it fly. I stand up and I can spot the rock on the other side of the street. “Hmm, maybe.”

I take a few steps back and run forward, launching myself in a Superman dive across the street. Instinctively, I close my eyes and brace for impact. I stand up and look around me expecting to see if the pizza place is behind me. However, there it is still mocking me at the end of the block. A guttural cry escapes my lips as tears burn the back of my eyes.

My voice echoes into the night. I stand up and try to dust myself off. Instead, I leave blood trails on my pant legs. I look at my palms and see them cut up and rubbed raw from my last two encounters with the ground. I shake my hands out trying to dry the blood without pressing them into my clothes.

As if to make matters worse rain begins to pour down, forcing me to run to the awning outside the pizza place. “I would say it could be worse, but I’d rather not test my luck.” I pace underneath the small awning of the pizza place. “Come on Azrael, think for once in your life!” The clock from inside catches my attention. I glance up and a giant clock showing fifteen minutes and counting down.

A voice sounding like nails on a chalk board replies from behind, “Thinking, has never been your strong suit.”

My heartbeat drowns out the sound of the thundering rain around me. I try to calm my heart. Suddenly, a rancid scent invades my senses. The smell is so overwhelming I drop to one knee.

“Such a feeble creature when removed from your office,” it says. The voice reverberates in my head almost causing a headache.

“Who are you? What do you want?” I manage to choke out, but it sounds distant and removed.

“For you to learn that ruining people’s lives, holds consequences,” it hisses in response. A sickening thud sounds to my left.

Looking at the feet of this thing I can tell it’s unnatural. My eyes travel up its spindly legs and knobby knees, the torso forms a giant triangle with the point being its waist. The shoulders are lopsided giving him the appearance of being slouched. Its arms hang limply at its sides, swaying gently in the wind. The head is malformed, a giant tongue hangs out of a toothy grin of which multiple rows of teeth can be seen shining in the dark. The nose is nothing but coin slots on its face and where the eyes should’ve been instead are indents in the skull, like an unfinished clay sculpture. I instinctively back away, but trip over myself while doing so.

I stare at it blankly. Its imitation of a smile grows wide as a clawed hand grabs my face. Before my eyes I watch every court case I lost, how I looked like nothing was wrong and that I couldn’t care less of the outcome. The families break down as cries of agony echo the halls of the courthouse.

Suddenly I’m jerked to the present laying outside of the pizzeria covered in sweat. Claw marks down my chest as a memento of this encounter. A note in my pocket reads, you left families stuck in time with your failures with little to no progress. This was but a small taste of the pain you brought them.

Anthony Tanner is from San Antonio, Texas. He is currently apart of the Military. Anthony is studying Creative Writing at Full Sail University.