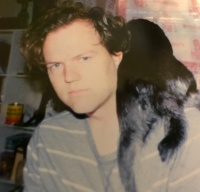 Tupperware, and the Little Red Sliver for a Second Hand

After my mother’s DUI, I took to driving her to her depressing little breakfast diner gig. If I had to guess, she started drinking after her second marriage. She hid it well, but I do not know much about these kinds of things.

On a winter morning before she went in that diner, before she left the car that is, she told me a story about my father. Outside the clear windows of the car, I could see the crimson sun rising, flicking between dark clouds. The early morning killed my eyes.

My mother sat in the passenger seat. After our goodbyes, she stayed. She rested her hands on the dashboard above the glove department.

She motioned for me to go ahead. But I didn’t.

My mother made fruitcake the night before and gave it to me in Tupperware.

“Keep the Tupperware,” she said. “You and Anna need it.”

“Your father and I, we’d have our morning coffee in the parking lot at the school,” she said. “In this car. We kept the coffee in a thermos. We shared.”

She taught math to the kids at an elementary school, and my father cleaned up after them. In the mornings before work, in the car, they would have themselves a little moment.

“Your father… it was the oddest thing. He had taken down the clock from my classroom and tinkered with it in the car. You know those clocks at school: white and round, near a foot in diameter, black rectangles. Little red sliver for a second hand. They’re all the same, these clocks.

“The thing is, is he couldn’t unfreeze the time. He first took the clock to fix the jumping second hand, but when he took it from the wall, the thing just stopped right there at 8:07 AM – the time when he pulled it down. He brought the clock with him and toyed with it during our morning coffees in the car. After some time, he stopped drinking coffee. He would just work on that clock. I told him. I said, ‘stop messing with that thing.’ But he never did. He melted into that clock. He went right in and never came out.”

“Are you listening? Do you catch my meaning?”

“It broke,” she said. “It shattered. It crumbled on the floor. It reinvented itself. What does it matter? The clock’s not important. You’ll understand.”

The smoke from the muffler rose in the still air outside and covered the back windshield. We rested between the asphalt and two white lines. We looked forward. The sun faded into orange as it rose and rotated. The Tupperware rested in the compartment.

I am an unpublished writer and current English major at the University of North Florida.

Any feedback would be greatly appreciated. Again, thank you for taking your time to read my story, and I look forward to your response.