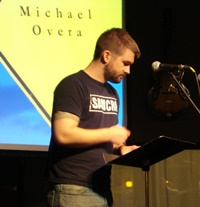 There is an archipelago inside the house on Fourth and Drapier.

Seven large folding tables comprise the entire group of islands. One table for each island. James enters his house through the garage now, the front door long since occupied by the largest of the seven islands. The oldest island, which he considers the capital, is set squarely in the middle of the living room, where he can keep an eye on things.

It is here, in the living room, that he began assembling the island on the small coffee table that once occupied the spot. It was as if the island emerged from the sea. But the island was there already. It was only that there had been nobody to inhabit it until one night ten years ago when he’d begun crafting the first rudimentary buildings from a discarded pizza box. Those early shanty houses were cut roughly and held together with clear tape and duct tape. The citizens of those first small shacks were hearty folks. Remnants of that early civilization are still present here.

Over the years, the other civilizations grew up. The population expanded, and the people of the islands mastered a sort of sea-faring that took them from one place to another. The cities now are evolved to the point that they seem to occupy the entire island. The buildings have grown to several stories, and the streets wind as they were created. Nothing is pre-planned. Everything is as the people will it.

Tonight, though, is the biggest celebration of the year for the people on the Cardboard Islands. It is the anniversary of their first settlement. James has brought a good deal of supplies with which to celebrate. The traditional fare of the islands is comprised of pizza and canned beer.

As their patron saint, he will not disappoint.

Tonight the islands are ready for their celebration. The houses have long since been wired for electricity. Lights glow in almost every window, defused by plastic trimmed from soda bottles. It’s like seeing a metropolis at night over the wing of an airplane. Or like seeing the Earth through the eyes of a satellite or a god. He is both. He orbits forever near. When he is gone, away at work, things can get out of hand. But the people here are peaceful. Their buildings have evolved. Now they are cut of foam core board and held together with glue and modeling clay.

But there are no cars to honk at the stroke of midnight.

There are no fireworks to explode in flowering sparks.

The islands will eat pizza and drink beer and listen to Judas Priest.

James settles into his chair. The music is clear but not incredibly loud. The people, after all, need time to reflect on their origin. Generation after generation of invisible people has walked these narrow streets. They’ve pedaled bicycles from one street to another, delivering goods. They’ve rowed and sailed and steamed from one island to another in vessels made from cardboard and foam core and guided by fishing line. This is their inter-island commerce. They are forever reliant upon his hand to guide them from one place to another. A ship, dropped by his hand, is never seen again.

At eight in the evening, he turns on the TV, the music still plays faintly in the background, and he begins the annual viewing of the second season of the X-Files. It was this TV show that James was watching when he first began to construct the islands. It became his ritual to sit down and help the people create their city while watching the show.

He sets an empty beer can on each island as he finishes it. The sliver of beer at the bottom of each can is for the citizens. By midnight he is beginning a second round of cans for each island. He is at the island of Mulder, having just placed the can of beer when he loses his balance and knocks a row of shoreline bungalows to the floor.

He stands for a moment, hearing the screams of the people that have been washed into the sea. And then, like an avenging god, he begins indiscriminately pulling buildings from the islands, tearing them from the tape and glue moorings that have held them in place. The carnage is random and unpredictable. At the Isle of Sentinals, he crushes several of the tallest buildings.

Then, exhausted, he stumbles to his room and collapses on his bed.

In the morning, he will decide if he will rebuild.

Perhaps the people of the Cardboard Archipelago will leave a sacrifice.

Perhaps he has already become the sacrifice to himself.

Michael Overa was born and raised in the Pacific Northwest. After working as a writer-in-resident with Seattle’s Writers In the Schools (WITS) program, Michael transitioned to teaching composition at Shoreline Community College and Edmonds College. As a short story writer, Michael has published two collections of short stories, This Endless Road and The Filled In Spaces (both published by Unsolicited Press). He is currently at work on his first novel Ain’t No Way Home. His stories have been published in The Portland Review, The Heartland Review, Crosscurrents, and East Bay Review, among others.