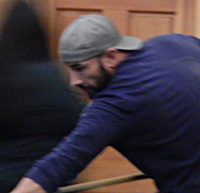 Some years ago,  I watched the movie, “A walk to remember.” Closer to the end of the flick
a particular scene stuck out as Jamie and Landon were outside on the balcony, dancing in the moonlight; to add which it was also the name of the song performed by Switchfoot. Thinking to myself I want to dance in the moonlight. To those that have known me for some time will say I wear my heart on my sleeve. This rough shell of mine, in most ways, is used as a defense mechanism.
I do seek to be loved although an icy exterior is contradicting. Issues with abandonment have come to be extremely  debilitating in this department, that and I can be pretty shy when it comes down to the select women I desire; even so the times when it works out, sabotage takes over. One aspect of sabotage has ruled in favor of the situation on countless occasions, mainly sabotage of self, cutting opportunities short. Cheating myself out of what I may actually deserve. It is either one of two things in this case; I don’t view it like so or don’t care to put in the leg work of having to uphold the responsibility of something new and deserving.

Perhaps it’s fair to say that a good chunk of my life has been spent playing catch up. An ability to live on the outside refused to thrive. If I wasn’t locked up, I was withdrawn, isolated while increasing paranoia took up frequent residence. Whereas the body is to be treated like a temple; My own was abused like that of trap-house. Rolling it back I can most accurately portray the role of catching up through a few sentences from an older piece, titled:
“Leveling out the effects…”

(So, when the time came to rejoin the family my assumptions of who they were in the present, were the same as back then. I was sorely mistaken to think the ones I had thought to have known so well would remain as I had left them. With all these changes occurring it was now time to catch up.) “Fucking A, the story of my life.”

The times when not incarcerated as a youth were spent rocking life till the wheels fell off!
How I saw it, was that it was always a matter of time before I was sent back. So why not get in, what I can, while I can. Back then; (what I’m about to say next I assumed would never be said.)

Now, twenty years later through the thick of it all the practice of catching up still very much exists, however in a more domestic form. At 36, which is only by the divine itself I have never married, fathered children or  held any responsibility other than accommodating the moment. Building a family of my own hasn’t exactly been on the top of my list. It’s funny I seem to get more pressure these days from my father about a grandson than my mother. Perhaps it has something to do with the fact that I am the last Nast.
I’m ok with that though because I have been witness to three very special girls in my life who have grown up with distinct characters of their own. My three little cousins. Over the years I have also had to play catch up on this front. At my Aunt and Grams salon I would stop in for a haircut, followed by Paella (a Spanish dish) and playtime. As time turns, these youthful family encounters evolve to one-word responses, face down in the I-pod. “Hey kiddo, how’s school going?”

“Sure.” Marks the end of the conversation. Jessie rarely needed my help a pretty self-sufficient kid what the three of them, the entire family actually truly needed was not advice or insight. They required a gift of presence.

I like how Rick Warren once put it. The best way to spell love is T.I.M.E. For myself in the present life is not so much a race against the clock as it previously was. These past couple of years have brought about a fair amount of change; the state of affairs, mind & spirituality.
In order to catch up with life I had to first take a time out. In my mind where things have to make sense, the above contradicts itself; once believing that it has to be more complicated than that! Again, some part of me needing to thrive off the chaos, even if I have to create it.
Of course irrational thoughts resurface, although as a friend has emphasized time and time again, acknowledge the thought, then let it pass.

Last week I was camping out at Lathrop lake. Early on one evening the plan was to finish a
card game. Instead, I fell asleep only to wake several hours later sometime around two in the morning. Somewhat restless, I began wandering around with headphones on and eyes fixed on the stars. A ways out I found a patch of moonlight hitting the concrete, my shadow out in front.
Call it the right beat at the right at the right time, call it a morsel of catching up. Putting all insight aside, here was my moment in the moonlight.

Derek Nast: I am currently a free writer with a limited number of publications. My publications include two short stories and three poems. I was raised outside of Chicago IL, although I’ve spent the majority of my life here in Denver CO. I have endured a life of promise amongst peril, including psychiatric institution, correctional institution, and addiction. With several years of sobriety under my belt, I believe these experiences are strong material that can be molded into a variety of stories.

THE BLUE ROOM by Shelbi Tedeschi

WHAT WE’VE KNOWN ALL ALONG by Conor Mulvaney