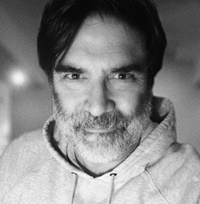 The League of Impossible Gentlemen
(A Love Poem)

When once upon a wintry outing
your eager true love tells you blithely
that in her life she’s lost precisely
no one noteworthy, surrounding

of his retreat—and though they know
she plainly isn’t talking fellows,
however ardent, doting, zealous
or momentarily engrossed,

and means more parent, friend or pet
and surely not some covey-flush
of beaus or their bungling and rushed
unhappenings,

(and clearly, too, means dead)—

yet, even so, the reprobate
who set aside his appetite
and leaned in earnestly the night
her teen hair dangled permeate

with toddler snot and frenchfry tallow;
and next the restless, juiced, excited
cyclist, who aimed to be a pilot;
and then gentle, square-jawed Joe,

a sylvan prothalamion;
and then those who (to her dismay)
were just unquestionably gay,
the scathing, sly and brainy; and

the always angling Drakkar Noir
boys leaning mouth to ear; the smashed
and tousled one she gave a chance
who wept a bit

and nudged her heart ajar;

the faithful sadsack she forsook;
the one who in capitulation
to disgrace and fear and expectation
she reasonably undertook

to wed and have a mortgage with
(as fractured as the rest, that guy
who, in her borrowed light, sat by,
a cenotaph to the shibboleths

that shutter up the heart); today
the pricey haircut who’s the sort
for popcorn on the davenport
and what all else is hard to say;

and me; all sired of one raffish
regimental prince in brief
girl-inked upon a spiral leaf,
Coke-bottled tight, that slowly vanished

tossed from a pier under a star
at Saugatuck, all lineal
from one guileless ceremonial
entreaty love

we each alight, a sack of fragments,
uncertain whether she will ever
apprehend the altogether
mooncalf ways of our enchantment,

until it falls to me to tell
how each new love-day brims like water
with expectation full, as altars
may become artesian wells

profusing marigolds and chayote,
persimmon, sugar skulls and salt
to witness grief so vast the assault
may be reborn a festival day

and each of us may cling by thread
in promise, to her sweater trussed,
and follow feverishly and hushed
to rest in her

Who waits for something secret to be masked
at the upswing of night before she will emerge,
even midsummer, even this glaciated moorland, when

as if you cupped your hands around a thousand
moths, impermanent, translucent in
July’s perfervid prairie dusk, almost blue-white

with hotel TV glow projected on her skin,

a Garbo in Ninotchka, leaning on the jamb
before you pause then wrist the knob, a glimmering
photopsia slowfloating from her grisette smirk

to something else, a poise or microgravity
that belies the gaping slobber girl contrived
by staggered Berber and Sumerian boys before you,

who, above the urinals of Numidia and Ur,
drew tongue and gape and gag and grunt, dithered
(as you are here) by the redolence now indwelling

a bidding and beguiling Bemidji whisper,

the gorgeous movement of whose dark perfume
in swirls around, untellable, ubiquitous,
is now the only the rhythm-mark of time,

whose sheaves of hair overfilling in your fist
are now the counting-sticks for everything
the world has ever had, whose kisses fertile,

countless, like the wood at Gargara,
obstruct and supersede the throated, raving howl
that tells why she is here, or would, that otherwise

would ring oblivion though gorges measureless to man.

As with shadows and reflections, so with portraits; they are often believed to contain the soul of the person portrayed. People who hold this belief are naturally loth to have their likenesses taken; for if the portrait is the soul, or at least a vital part of the person portrayed, whoever possesses the portrait will be able to exercise a fatal influence over the original of it.
— Sir James George Frazer, The Golden Bough

When coverage breaks on CNN outside
the underpass, you stand above the kettle
grill with brats. Your wife announces out
the bedroom window calling down like Scrooge
to the disbelieving It’s-Christmas-Day-sir boy
Go and buy great piles of festival meat
and pitching him a shiny half a crown.
The sausages bowed and moonwhite like her limbs
in the bikini bathing pics from ninety-one,
grill like her Saxon body in the Corsican sun.

The milky tubes denude above the heat
almost before you can rotate them with tongs
and quickly platter them. A blackened shred
falls to the dog and inside while you eats the rest,
fragments knit together clumsily
emerge from la Pitié-Salpétrière,
how miscreants had tracked her from the Ritz
and orbited afterward for the money shot
like the capable spaniels of Actaeon
the half-man hunter god of all outsiders peering on,

who through the tangle and the retinue,
saw every part undressed, an accidental
banquet of exposures — skin, eyes, lips
hair, teeth — who first observed, then driven
wild in panic then was rent. The BBC
awaits something from the crown, among
anchors there is talk about the jaws
of life, onlookers over balustrades
who with Watchmen view dispatches from outside,
recall the fabled cockatrice with penetrating eyes.

Greg Sendi is a Chicago writer and former fiction editor at Chicago Review. In the past year, his poetry and stories have appeared or are forthcoming in a number of literary magazines and online outlets, including  Apricity, The Briar Cliff Review, Burningword Literary Journal, Clarion, CONSEQUENCE, Flashes of Brilliance, The Masters Review, New American Legends, Plume, Pulp Literature, San Antonio Review, Sparks of Calliope, Sycamore Review and upstreet.

HONOR THIS by Amy Nocton

MY CHILDREN by Andy Conner