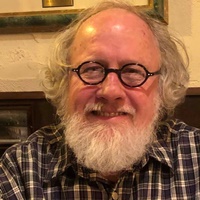 It was the requirement I most feared. We
had to pass a language competency exam
to progress into the Ph.D. program.

I chose French even though my past romance
with that language had been mostly unrequited.
I managed to squeeze out a B in a brutal summer

course at the University of Denver so I could graduate
and then, at Christmas, 1976, I was beset with lingo
Franko again. This time it was French For Reading.

philosophy which didn’t improve my Sein or Zeit.
If, as Marty proclaimed, death is our ownmost
possibility, I hoped it would arrive soon.

How to catch up? I selected the Chatham College library
because it was close to home and I’d never seen any
of those rich girls congregating around the stacks.

I arose every morning at seven, ate a quick breakfast,
packed a sandwich and a thermos of hot tea and
drove to the library where I parlez voused Frances

and read Being and Time for eight hours a day,
every day, during that precious Christmas break.
My sweet wife was justly irritée, mais que

pourrais-je faire? She wasn’t anywhere near
as irritée as the security guard at Chatham whom
I called from the empty library one evening

after I’d lost myself in the ecstasy of always
already being Da in the world and hadn’t noticed
the library going dark. I tried the main door,

but it was chain-locked from the front. The frown
of the buxom security guard, the creek of her leather
belt, and the roll of her eyes conveyed that

she was dealing with someone who had fallen
fifty-four chapters behind in his French class.
Freed from the tomb of tomes I passed my

French comps and my Heidegger exam and
reveled for the next nine years in the être
et le néant of my Ph.D. program.

The first myth was that we’d all
last forever,
Mom and Dad everlasting,
But the grim-faced priests put that to rest
because, as they said,
one day we’d all be dead.

The next myth was that, as sure it was
we’d die, we’d all rise again,
ascend into the sky.
There we’d find our family and friends,
all would be well unless, of course,
we fell to hell,

Then we’d burn without respite in the fiery pit.
The nuns told us to pass our fingers
over a lit match, jut to get a faint
Feel for the anguish that could await.
We’d better not lust, better not flout,
you know what that myth was all about.

And finally, her body writhing under mine,
her head later in the curl of my arm,
I knew forever was a dream I no longer desired.
I found eternity in a moment, a spark
of infinity in her perfumed hair.
No more myths, my dear,

Just you and me, now and here.

My friend, Gus, carried the book Failing Up
around like it was the bible
which, in a way, it was for him.
Gus failed up like our cats threw up:
they couldn’t learn not to lick
wads of fur off their soft bodies,
so they puked—often and arrogantly.

Gus squeaked by with an odd job here,
an even odder job there. Still,
he attracted a lovely woman who spent
hours toning her body at the gym—
the gym where Gus would do a few push-ups,
some casual sit-ups, maybe a knee bend
before retiring to the snack bar
for a veggie burger and power shake.

No one was allowed to attend the wedding ceremony.
Gus said it was too sacred to pollute with witnesses,
although their affenpinscher, Acne, stood up for them
(when offered a biscuit), and a justice
of the so-called peace presided. I think a northern pine
was present. At their wedding reception
people bet on how long their marriage would last.

Immediately after the ceremony, Gus’s wife began
to hound him with unreasonable demands:
“Get a job, you blowhard!” she bellowed. “Pay the bills!”
“Pick up your underwear!” That sort of thing.
It lasted one day longer than the prenup: ten terror-filled
years of drugs and booze and abuse on both sides.
There was, of course, a child who asked for none of it,
but got it all.

Charlie Brice is the winner of the 2020 Field Guide Magazine Poetry Contest and is the author of Flashcuts Out of Chaos (2016), Mnemosyne’s Hand (2018), An Accident of Blood (2019), and The Broad Grin of Eternity (forthcoming), all from WordTech Editions. His poetry has been nominated for the Best of Net Anthology and three times for a Pushcart Prize and has appeared in The Atlanta Review, Chiron Review, Pangolin Review, The Sunlight Press, Sparks of Calliope, and elsewhere.