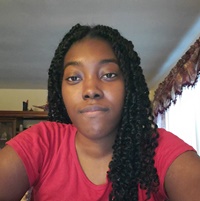 My hands went white as they gripped tightly around the steering wheel. I leaned my head against it for a moment and pulled back to see sweat covering the horn. The excess dripped from my forehead into my already swollen eyes, enlarged and purple from a few nights without rest; nights spent pacing back and forth in a pitch-black room, gnawing on almost non-existent fingernails. I could’ve chewed down to the cuticle had it not been for the metallic taste of blood on my tongue and the sharp, stinging discomfort that came with it.

I wiped the sweat away with the faded green sleeve of my hoodie before taking a few deep breaths. The vague scent of old fries and molded meat from a discarded lunch tickled my throat and I coughed on my third inhalation.

“Relax,” I told myself as I took a swig of water from the half empty bottle to my left. “You can do this.”

Otherwise, my sister and I would be walking the streets again wearing holey shoes, shivering under the thin layers of hand-me-down coats, begging for a place to spend the night. Mom was the one who took care of us, who went out and found ways to get cash, but she’d been gone for a few weeks now. The fridge was empty, the water and electric were off. So, yes, I had to.

I was supposed to wait in the alley at the end of the street around the corner from the bank, parked in the small black car fit for four. When those three men came running with hefty black bags filled with stacks of green paper, I’d be ready with my foot on the gas before the blue and red sirens came blaring down the road, before those cars—packed with armed officers—screeched to a halt, looking for culprits. That was the plan in exchange for twenty-thousand dollars.

However, they’d been in the bank for much longer than discussed. Perhaps something went wrong; perhaps I should go in.

One of the men—the blue-eyed one with the wispy blond beard—told me earlier not to get out of the car. “It should only be five minutes. Stay right here and wait for us to come back,” he’d said. “Do not move. Got it?”

I’d nodded with a gulp, making sure not to eye the firearm he’d swiftly tucked into his jeans. “Got it,” I’d said.

So, I waited, but those five minutes had turned into fifteen with no sign of them or even a hint of the disorder I assumed would accompany robbery. Where could they be?

That’s when I heard it—the three prominent bursts of copper shells leaving their chambers, followed by sirens. Through tired eyes, I could make out the figures running toward me.

“Start the car,” one shouted in the distance.

With shaky hands, I twisted the key into the ignition. The three men threw themselves into the vehicle and I stomped on the gas pedal. I tore out of the alley into the open road, hitting a garbage can on my way out.

In the street, I swerved around a sea of cars, switching skillfully from lane to lane. A horn blared as I sped through a red light, missing another car by just an inch.

Sirens rang out from behind us. The three men shouted for me to hurry when another burst of copper sounded and shattered the back windshield.

Blood splattered across the dash and I screamed, involuntarily slamming my feet on the brakes. I turned around to see one of the men slumped over in the lap of another, bleeding out from the hole in his head. My mouth turned cotton as I watched the red leak into the carpets.

The men were shouting in the back, ordering me to drive. They fired their guns at the approaching authorities.

Bullets were flying, my blood was pumping, and the light had just left that man’s eyes.

Absolutely not. I could not die today. I swallowed down the bile that burned in my throat, stepped on the gas, and raced down the street. Veering right, I maneuvered through the chaos of traffic, using back streets and short cuts until the sound of sirens was far gone.

I stopped the car in the warehouse like I was supposed to. The surviving men and I hopped out of the car, covered in the meaty remains of their friend. The blue-eyed one tossed me my cut, nodding.

I wasn’t, though. I had my sister.

She’d recognize the sacrifice I’d made for us, for her; that the terrible thing I’d done was to assure her safety and her future—one where she wouldn’t have to rely on the uncertainty of our mother.

But she cried when she saw me splattered in blood, thinking it to be mine, which I assured her it wasn’t; and when she saw the duffle in my hand, partly unzipped with green poking out, she’d put the pieces together, backed away from me, and grimaced.

She couldn’t understand; couldn’t see why I’d done what I did. But I had to. Didn’t I?