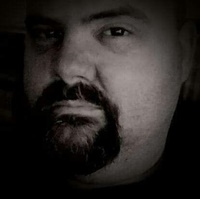 Second-grader John’s unsophisticated interpretation of a turkey was the featured creative display. Framed and loosely taped to the hall wall, it functioned as the morning’s primary welcoming committee of each student that entered the classroom.

“A representation of artistic genius,” Mrs. Campbell said. “Every student is talented, but John has ascended beyond the mediocrity of his contemporaries.”

The morning bell echoed throughout the school, and Lisa collapsed onto her desk. The room buzzed with conversation. Remedial mathematical equations adored the blackboard. A black electrical pencil sharpener and a lone apple sat upon the teacher’s desk.

Lisa thrust her hand into the air.

“I need a pass to the restroom,” Lisa said.

“Very well. I don’t want you to have an accident,” Mrs. Campbell said and presented a permission slip to Lisa. “Don’t linger in the hallway.”

As Lisa stood in the hallway, she couldn’t help but mock John’s artwork. She blew a raspberry and rolled her eyes. “Ridiculous!”

After ensuring there were no witnesses, Lisa detached the drawing and crumbled it into a ball. She forced it into her pocket and rushed to the restroom.

The restroom was aromatic of the most recent occupants. A couple of small fishbowl styled sinks aligned the checker patterned wall. There was an empty paper towel dispenser and an overflowing trashcan beside the door.

Lisa opened the graffiti infused blue restroom stall door and contemplated her actions. She knew she needed to dispose of the evidence and tossed the crumbled artwork into the unsightly commode. During the flush, the drawing became wedged, and water cascaded onto the floor. Rattled, Lisa rushed from the scene of her devious misconduct.

“No running in the hallway!” the janitor said.

“Were you in the restroom?” the janitor asked.

Lisa trembled with anxiety. There was an abrupt knock on the door. Lisa feared it was the janitor.

“Mr. Sampson, what a surprise,” Mrs. Campbell said. “How can I help you this morning?”

The detailed whispers of the janitor were unclear.

As her classmates snickered, Lisa joined Mrs. Campbell and the Janitor.

“What happened in the restroom?” Mrs. Campbell asked.

“I’m not sure what you’re referring to, Mrs. Campbell,” Lisa said.

“What do you know about this?” the janitor asked. “It appears to have caused an overflow in the restroom.”

“I can explain,” Lisa said. “I was frustrated. I wasn’t thinking clearly.”

“It’s just, you’re always bragging on John’s artwork, and I was jealous. I removed it from the wall and attempted to flush it,” Lisa said.

“John is an orphan. He doesn’t have anyone else to uplift and praise his achievements. It was never my intention to belittle anyone,” Mrs. Campbell said.

“I didn’t realize he was alone,” Lisa said.

“I realize that, but you could have expressed your concerns in a healthier manner. Your actions are unacceptable,” Mrs. Campbell said. “I must call your parents.”

“I have a better idea. Do you have an extra mop?” Mrs. Campbell asked.

Lisa spent the rest of the morning getting acquainted with the tools of the Janitorial trade.

Mop, squeeze into the bucket and repeat.

It was a valuable lesson in humility; she’d not soon forget.

Nelson Samuels is an award-nominated author, music producer, and filmmaker. He lives in south Georgia with his daughter and three cats.