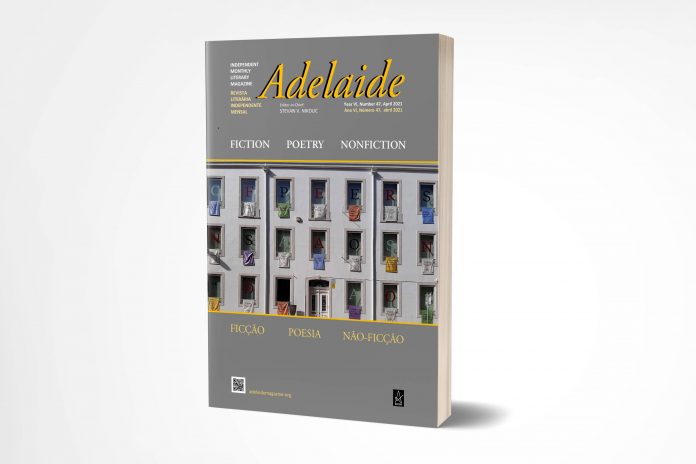 What Am I Doing, Why Am I Here

I dream I am playing a character whose actions I understand only as the story goes on. I am a powerful man who has my friends arrest a woman I am seeking revenge upon. A woman who loves me is with me.
I collect evidence on the arrested woman. It is then I understand what is happening, how
the plot unfolds. I can see by my character’s intensity and singleness of purpose that I intend
to execute this woman for her misdeeds, and that this will surprise and horrify the woman who loves me, and she will resist, so the audience will have someone to root for.

Taking a walk down the street with my wife, late;
full moon over the river, its luster thinned
by lights on our block porch lights yard lights
motion sensors Christmas lights
Old Solstice repurposed
lights the eyes reflect but do not radiate
that envy the moon its original coldness

In dark morning I waken,
hustle down to the lake for sunup
dawn sky clear over blue Ontario’s shore
water is quiet till you get
far enough out on the pier
so lake whispers on both sides
high overhead
a vapor trail’s curled wisp
catches the light
of the approaching Guest

there is pink, and some disturbed shuffling of colors
then no color any more but the popping of a deep
red sexual eye whose gaze I return until I can’t.
Below a double reflection appears and where did
those ducks come from, not there a few seconds ago
till one of them throws its head back
and pitches forward to vanish,
the others following suit, all emerging upriver
and I see they aren’t ducks but mergansers, cruising
quietly up the channel in the shadowy foreground of sunrise,
having beaten the ducks and the gulls to the good stuff

To Welcome a Gift

The sound of feet hurrying down the stairs: I will miss
my grandchildren this pandemic year, their faces shining out of sleep,
older sister parceling out gifts for her brother and parents and grandparents
when she could tear her attention away from her own,
and drifting in from the kitchen the smell of buttermilk scones
Was it the same lifetime

My kids were the ones making noise on steps,
The arduous affixing of small-gauge track to plywood;
or before, the soft pastel tableau of stuffed animals, all dressed
up for the party and the new stuffie Santa left?

A color-coded thread goes further back, where I
as only child imagined a numinous cloud come out of sky
the night all nature stopped— all stores closed—
which gave the cookie left on the plate a special tinge,
a thing I could close my sleepy mind around

the actual opening of gifts always a letdown
The story come apart in the torn foil and loosed bows,
a consciousness bludgeoned by things,
as if the snow globe got dropped and shattered yearly,
detritus in the nullifying war between Real or Not
Christmas sloughed off by the rest of the calendar
in the everyday slipshod bash of Reality Myth
the Prince of Stories got disappeared

Until children came into the house
bringing Form to join with Story
the fine print instructions I had missed
on the back of each gift,
letting the impulse to give
be expressed in a story
which is Form to the giver
who gets from the giving
the subtle understanding
of how to receive

The Strange Motion of October 2020

Because no matter how much anticipation we feel, or dread we fall prey to,
that won’t count in the vote
Because this time is irreducibly before
Because a great black cat is coming through the mountains to our door
but we can’t see her face till she reaches it
so we don’t know if she’ll be bringing the plague rat she’s killed
or the cockatiel of promise

Because it is like the dream of the life we are living
which has the same length for the one alive whether we die tomorrow or in fifty years
Because we build furiously, make foundations deep, and wonder
if we will ever again be able to summon this urgency
Because it doesn’t matter how fast we go
Because all roads lead to the line for early voting

Because the beautiful trees are going on without us
Because we have stepped off the olive-gold carousel,
glad it’s still turning but not really on it this year
Because we are a hundred million-headed three year-old who is
building a tower of small blocks
Because the tower of babble rattles at us at our task,

Choosing the path with heart

William Pruitt: I am a poet, fiction writer and storyteller, and an Assistant Editor with Narrative Magazine. I have published poems in such places as Ploughshares, Anderbo.com, Otis Nebula , the Tipton Poetry Journal, and Cottonwood; two chapbooks with White Pine (Ravine Street) and Foot Hills (Bold Cities and Golden Plains); and the self-published Walking Home from the Eastman House. My short stories have appeared in Crack of the Spine Literary Magazine, Midway, Indiana Voice Journal, Adelaide , Hypertext, et.al. I have told stories in numerous places in Rochester and upstate New York, including the National Women’s Hall of Fame. He taught English for 26 years to non-native speakers. My wife Pam and I have two children and two grandchildren.