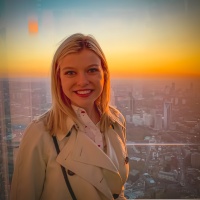 I moved to New York over two weeks ago now, and I haven’t had a full night’s rest since. Writing this, it shocks me to realize it’s only been two weeks; it feels like at least two months and sometimes two years. From the external viewpoint, it would appear that I am living out my wildest dreams. At fifteen, I wrote a paper describing my deep desire to move to New York as an adult, even though I had never been to any northeastern city at all. Six years later, here I am, in a small but cozy apartment in Brooklyn, shared with two roommates whom I had never met prior, and my vagabond partner-in-crime chihuahua, Gemma. It would appear that I have freed myself from the temptations of a modest but comfortable life in the Midwest. It would appear that I have freed myself from the very idea of home itself, off to reinvent the word by my own rules. If only I could be convinced of this illusion myself.

I just don’t understand why anyone would move to New York in a time like this. Isn’t it a dangerous place? New York City isn’t what it used to be, you know. Everyone is leaving. These are some of the things I heard from strangers and friends as I prepared to leave. Some of these statements were founded on truths, while some of these statements were made by people who had never stepped foot in the city. I was able to brush off any snide remarks, at least until I had arrived at my dream destination. If nothing else, I am known to be quite stubborn once I make up my mind to do something, which is probably why my parents didn’t try to stop me. But days of job-searching went by with nothing to show but a few polite rejection letters, which were still better than the roaring silence that followed most of my applications. Each night, most often between the grueling hours of 2 to 4 am, the remarks rose from my subconscious to wake and taunt me. Was I here pursuing my dreams, or was I merely running away from all the nightmares of my past, of the past year’s nightmares in particular? It’s true that I was no longer sitting still in one place, but was I just running in circles instead, and was this any more productive?

As I wondered whether or not I was headed for a quarter-life crisis and immediate burnout, I watched the inauguration of the newest President of the United States, Joe Biden, along with his Vice President, Kamala Harris. And it was the most unusual ceremony, far from ideal in anyone’s minds, but despite this, there was a glimmer of hope. It was not the end of a fight, but the reminder of resilience. It was the realization that it is not the light at the end of the tunnel that moves us forward, but rather the torch we are handed that guides us. And this rings true for our country as it does on a personal note, for me and likely many others in situations like my own. We must move forward with resilience, not because it always seems logical and not because it’s comfortable, but because we owe it to those who were resilient before us. We owe it to the dreams of our younger selves, and we owe it to the dreamers of tomorrow.

Marie Seeba is a past elementary school spelling bee champion, a current people watcher, and a future ghost. She writes about the endless things that intrigue her and also sells upcycled secondhand clothing. If she didn’t suffer from vertigo, she would definitely be an astronaut. She specializes in humor for those who also grew up in a small town, Midwest preferred, but not necessary.