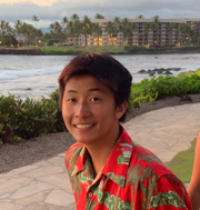 If there’s one thing I’ve learned
from the hours spent staring
at the tiny airplane on the edge
where the sky breaks the rock,

It’s that when scenery passes
between two realities, flashes of
what was slowly replacing what is,

his gnarled smirk fires directly
through the mirror, my gaze suddenly
confronting a foreigner in the window.

But where did the airplane go?

Chilling blue eyes pierce
my spine; a shiver forms;
shuddering at the inevitableness of it all,
and –

Leaving nothing
but the distant humming
of the airplane
now past the break in the edge.

Maybe one day
I’ll finally learn.
But for now,

I await his return.

Alex Koong is a junior in high school, whose work has been honored by the National Scholastic Art and Writing Awards. In his free time, he enjoys playing tennis and hanging out with his dog.