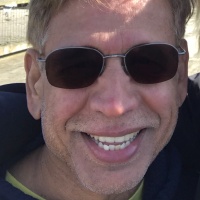 Wayne was still a farm boy even though he had left the farm over a decade ago. He was still the innocent who saw only the best in people. Although he was built like a rock, he never threw his weight around. He kept his cool even when people made fun of his farm boy ways. He would not have left the farm were it not for Nancy. She was his girlfriend since their middle school days. Everyone in the boonie town expected the two to get married soon after high school. But then Nancy got weird in junior high. She stopped eating meat. She had her mom drive her miles out of town looking for vegan co-ops. Then she became enchanted with Hindu mysticism and soon going to India became her obsession. She told Wayne boonie life was not for her and urged him to go to college and explore the world. So that is what he did. He moved to a college town in a different part of the state and met “other” people – other races, other nationalities, other gender identities. He struggled through the first two years of college and found his footing in the junior year when he found a job in the computer lab. He got really good at hardware assembly and learnt all the packaged applications he could get access to. In spite of his interest in computers, he struggled in programming classes and barely managed to graduate from college. Soon after graduation, he found a job in the city and met Gopi, his boss.

Gopi was a Brahmin boy. He was a Brahmin boy growing up in Brahma Nagar attending a Brahmin school, Shankaracharya Vidyalaya, where all his fellow students were Brahmin boys just like him until the state took notice of the exclusivity and forced the school to admit under-privileged, non-Brahmin kids from the local slums. Although some Brahmin boys welcomed the presence of the kids from the slums and tried to help them with school work, Gopi was among the majority of boys who were disdainful. He called the slow-learning kids stupid and became all the more convinced of his superior Brahmin intellect. He carried that attitude everywhere – the technology school he went to in his home state, the graduate school he went to in America and the work places where he rose up the ranks as an accomplished techie. The only change he allowed was to stop calling people “stupid” after his student advisor told him it was considered a mean thing to say that about someone in America. Instead he took to calling people “useless” – that “useless fellow’” or this “useless woman”.

Wayne reminded Gopi of the slow-learning kids from the slums. In spite of his best efforts not to show annoyance, Gopi let his arrogance get the better of him in his dealings with Wayne. Wayne, on the other hand, just laughed off the slights and never failed to acknowledge Gopi’s superior intellect.

Gopi constantly referred to Wayne as a “useless fellow” when he talked to his wife, Parvathi, about his day at work. He had married her on a short visit home right after he had found his first job in America. He had known no other woman in his life. He was briefly infatuated with his advisor’s teenage daughter and imagining her in a Kanjeevaram sari excited him. But that ended when he heard her making fun of his name – Go pee!

That evening, Gopi was more excitable than normal. The Diwali celebration was at a friend’s house some 50 miles away. Snow was in the forecast. He wanted to get going. The more he ordered Parvathi and the kids to hurry up, the longer they took. So by the time they hit the road, he was hopping mad. He was mad at his wife, his kids, other drivers on the road, the side mirror, and the weird engine noise that he imagined he heard.

It was past midnight when they left the party and headed home. Light snow was falling and he wanted to get home before it started coming down hard. Then he heard it. This time there was no mistaking the sound: the engine was definitely running rough. When they were about 10 miles from home, there was an explosive sound from under the hood. Just as he was pulling over, the engine caught fire. He jumped out of the car yelling “get out of the car”, “get out of the car” and ran away from the car. He could see Parvathi struggling to get the two kids from the back seat, but he didn’t dare go near the car to help her. His mind started racing: “I’m going to lose my wife and kids tonight. What’s going to happen to me? I need my family. I need a family. I’m only 45. Hope Amma can find another bride for me. All is not lost. I can still start another family.”

Flames were shooting up and smoke was filling the air while Parvathi was still trying to get the younger child out of the car. Out of nowhere, this big-ass pickup truck raced up to the burning car and screeched to a halt right next to Parvathi. The driver, a giant of a man in heavy jacket, jumped out of the truck, reached into the burning car, pulled out the child stuck in the back seat and hustled Parvathi and the kids to where Gopi was standing looking helpless. He pulled his truck away from the burning car and loaded the family into the cab of the truck. As he was doing that, they could hear the fire trucks at a distance. Gopi started to say “thank you so much, sir” to the good samaritan and froze mid-sentence. The good samaritan exclaimed “Gopi!” and Gopi managed to say “Wayne, you saved my family.” Parvathi glared at her husband and the glare conveyed so many thoughts, none more pointed than “Useless fellow?”

Balu Swami is a new writer. He has lived on two continents, three countries and multiple cities. He currently lives in the US. His works (poetry and prose) have appeared in “Ink Pantry” and “Flash Fiction North.”