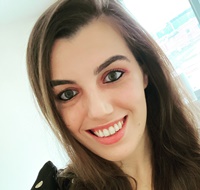 It was the pink velvet dress. Evelyn held it up against her body slowly dancing with it while trying to avoid tripping over the boxes that filled her new apartment. “It was this dress,” she yelled. She could still feel his arms around her waist. His beard brushing on her cheek. There were so many moments Evelyn wondered whether she had made a mistake that morning leaving him. She closed her eyes, gripping on to the dress and started singing, “ you soft and only, you lost and lonely you..”

It started out as a typical night for them. Rowan, a Irish rebel who had jumped into more fights at stadiums than years he had lived, waited for her at a bar on the beautiful Stone Street in NYC, Dubliners. He was always wearing a cap on his head as if he had come straight out of Peaky Blinders. At first, she couldn’t stand his hats but as time went on, she realized it was part of who he was.  She walked into the bar and saw him holding a Guinness with the tattooed upside down cross on his finger. She glared at him for a moment. Although he had several attractive qualities, for her it was always his eyes that caught the most attention. They were this beautiful shade of green that carried his pain so well. A pain that she found to be a comfort because it made her feel like he understood her.

They had come from two different worlds. Evelyn was born and bred among the clouds. When life had thrown her and her family down to earth, she struggled with being on the ground until she met Rowan. He always saw her as someone who had all the opportunities in the world and if he didn’t call her an idiot by their second drink something was wrong. She saw Rowan as her guide and opened her eyes in more ways than she could have imagined. He was the only man that she trusted and made her feel like she was worth something in a world that had thrown her so low that she looked in the mirror everyday and just mumbled, “worthless.”

The irony of it all was that he always felt like he wasn’t good enough for her. Rowan had a massive commitment phobia, hence why he had her in his arms for 3 years and never wanted to make her his. However, there was much more to him. His decisions were fueled by self loathing. He carried many demons in his chest and always felt that Evelyn or any woman would not be happy with him. Happy with just who he was and what he had. In his mind, she could be his world and all he had to give her was pain. In the end, that’s all he gave her anyway.

Drink after drink their night was filled with laughter and playful jokes. They could have not said a word to each other all night and just sat there happily staring at each other smiling. Neither wanting to admit how they feel about each other, of course. Then, the song came on, “you soft and only, you lost and lonely you…” when he grabbed her hand and said,  “come on, darlin. To this we have to dance.” For 3 minutes and 19 seconds, they took over the whole bar and just twirled. Rowan kept singing to her, “you’re just like a dream, you’re just like a dream” and it became the first time in their long history of attempted dating that they were equals. Their pain erased for those few minutes. A feeling neither of them will experience again, but always would have a moment of time that froze for them to remember fondly.

Shortly after, it was the last call at the bar. They put on their coats and braced themselves for the cold January air. As they walked to World Trade Center, they paused at their spot, Saint Paul’s Chapel or as they had called it, makeout church. Usually this was where they said their goodbyes to each other before they crossed the rivers to their sides of the city. Across from the Oculus, Rowan pinned her against the iron gates of the chapel, slowly lifting her legs, and kissing her as if all the lights and streets of NYC had ceased to a halt. Tonight, she would journey to his world across the Hudson where they spent the night in each other’s arms until Evelyn could hear the birds chirping with the sunrise.

When she got up from the mattress he always kept on the floor, reality had hit her. All she could think about was them or what it was she was doing with him. Three years and they were no more together than they when they first met. In the back of her mind, maybe she always knew they had no future or at least that’s what she kept repeating to herself as rage started filling her walk down to the uber. Maybe she had just created a fantasy in her head that had to disappear but how could she stop loving the man that brought her back to life.

Holding onto the door handle, she whispered, “ I love you. Is there anything you have to tell me?” He just laughed and said, “ There are some things that will always be constant. The government will always take our money, eventually we all die, and my hatred for those words.” Evelyn just nodded and walked down the stairs, her heart shattering.  Rowan was never going to love her back or atleast, love her in the way that she wanted him to. So, she got in the uber and left him. All he had to do was stop her or say more but to him it was just another night, expecting there to be more. She glared out the car window thinking about the words again, lost and lonely.

He was lonely. A choice that he justified as a selfless act to contain the self righteous despair within the walls of his mind. She was lost trying to navigate a brand new life of which she barely could get a stronghold of. Together, they had created their own heaven under the sheets that night which in her mind made it the perfect goodbye. A silent departure.

She opened her eyes as the wave of emotions hit her. Evelyn eventually moved on. However, when asked about her and Rowan, she would say, “ The problem with love is that sometimes it’s not enough. He and I were like parallel lines. Destined to hold each other’s hands but never cross the boundless earth as one.” It was just a pink velvet dress.

Iva Cvjeticanin was born in Zagreb, Croatia. She spent the majority of her life growing up in Queens, NYC. Although she was always an avid writer at school and University ( NYU ), her passion for it really began as a way of therapy. Writing for her became a way of channeling all the emotions and struggles she was facing and a way of facing those problems. – short official bio In 2016, my father was sent to prison and within a few months of his departure, I lost everything. Shortly after, my now ex boyfriend attempted suicide blaming me as the cause and that my life had become “to complicated” for him. This short fiction piece is based around a girl, Evelyn, and her struggles to navigate the “modern” dating world. I may not have had money for food but I somehow always managed to find pen and paper. Through writing, I gained not only clarity but an ability to muster the right words to respond to situations. For me, it is about creating art and allowing my readers to feel what I have felt and imagine what I have seen, not to have myself understood better but so that they could understand themselves better. Today, I continue to write my story from my small Jackson Heights apartment.