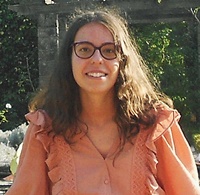 1. Tell us a bit about yourself – something that we will not find in the official illustrator’s bio. Do you have any unusual creative habits?

I was born on 11th July 1999 in Porto, the second largest metropolis in Portugal, located in the north of the country, where I still currently live with my parents and my younger brother.

I can say, without any doubt, that my predilection for illustration started when I completed my first year of life. By that time, my godmother had sent me a package that contained my first birthday card, with an emotive letter, and my first VHS tape, Fantasia 2000.

I was immediately fascinated by the animation, full of colors, music, and characters, and from that day on, I followed all the films of the animation studios of Walt Disney, Pixar, DreamWorks and, soon after, Ghibli. Shortly afterwards, given my fascination with animations, my parents offered me my second VHS tape, Snow White and the Seven Dwarfs, and, from there, I started my huge collection of tapes, which I still cherish today.

Over the years, in addition to deepening my passion for animations and classical music, present in most of them, I started trying to imitate the illustrations of the films in my notebooks. When I was four years old, my godfather, appreciating my taste in painting, offered me my first set of gouaches, which for a long time I took with me anywhere. Preserving the same taste, at the age of eleven I received my first set of acrylic paint from Winsor & Newton, offered by my parents, with two canvases, so that I could continue to explore the fine arts. Shortly afterwards, at the age of twelve, I painted my first canvas, which represented a small island with a lighthouse. Since that work I have been learning new techniques of illustration, both with acrylic paint and with pencils or other painting materials.

However, aiming to be a teacher of Portuguese and English, and never forgetting literature, which, alongside illustration and music, has always been one of my three greatest passions, I decided to focus on school and university studies and consider illustration as just a hobby. However, in the beginning of 2020, with the arrival of the pandemic, finding myself with a lot of free time, I found in the illustration my old therapy, which makes me, even today, forget the obstacles of everyday life and enter a different world. In this sense, I decided, at the beginning of February 2020, inspired by one of the most remarkable Studio Ghibli films of my life ‒ Kiki’s Delivery Service, directed in 1989 by Hayao Miyazaki ‒ to start this illustration, done in acrylic paint, which I finished at the beginning of April. Preserving the same passion, I intend to develop new illustration techniques and do more work.

As for my creative habits, which are, for the most part, quite common, I must say that I prefer to paint anywhere that has direct natural light. Therefore, I prefer to work in spring and summer, since I can illustrate outdoors and have more intense sunlight for longer. In addition, whenever I illustrate, I listen to music, preferring the classic genre, and soundtracks from animated films and fantasies, with composers like Joe Hisaishi, Alexandre Desplat, and Danny Elfman. I also appreciate the jazz genre, admiring artists such as the Portuguese musician Salvador Sobral, winner of the Eurovision Song Contest 2017, and, in other musical genres, the Portuguese musicians Miguel Araújo and António Zambujo.

2. Do you remember what was your first work about and when did you create it?

My first memories, from the times I attended kindergarten, are full of drawings and illustrations that I made and, even before those memories, my family remembers that I always loved fine arts. However, my first serious work, made with acrylic paint, was a small canvas, which I painted at the age of twelve on a small island with a lighthouse.

I am currently attending the last semester of the degree in Languages, Literatures and Cultures, at the Faculty of Arts of the University of Porto, in Portugal, and I intend to access, next year, the master’s degree in Education of Portuguese and English at the same faculty. Consequently, the illustration continues to be a hobby, and I dedicate less time to it than I would like. However, even though I am not studying or working, professionally, in the field of illustration, I continue to develop my artistic works. Right now, as for the visual arts, I am starting a new illustration, also inspired by another film by Studio Ghibli that left a deep influence on me, Spirited Away.

For me, the most relevant aspect of this illustration, as well as the others I do, is the fact that, simultaneously, painting is the most therapeutic activity I have, and that the result leaves me fully realized. In addition, this illustration is deeply symbolic, as this was the first Studio Ghibli film with which I had contact, and because I see myself completely in the protagonist, both in terms of her personality and her path.

The artist who most influenced this work and many of my others was, of course, Hayao Miyazaki, given that this canvas corresponds to my interpretation of one of the opening scenes of his 1989 Japanese animated film, Kiki’s Delivery Service.

However, among my other artistic influences are Johanna Basford, who influenced my taste for country and floral illustrations, and the illustrations of Animation Studios such as Walt Disney, Pixar and Ghibli.