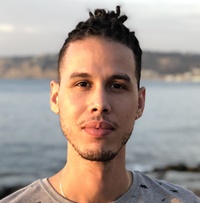 1. Tell us a bit about yourself – something that we will not find in the official author’s bio. Do you have any unusual creative habits?

I rarely write anything without coming up with the tittle first. Most of my ideas come from the tittles and the tittles come from everywhere, the lyrics of a song, the verse of a poem, a dream, a videogame, or even a folktale. Sometimes I’ll think of an interesting concept like “What if there was a sketchbook that brought things to life”, but don’t have a story to go with it until much later, so I just have this post-it note on my phone full of random ideas and seeds of stories that have yet to manifest themselves. Occasionally I’ll write a story in Spanish first and then translate it. The process helps me find unique metaphors and word phrasing that I feel give my writing a different flavor and texture.

My first story called “Omi” revolved around an African warrior on a mission to save the chieftain’s daughter. I wrote it around 2010 for a Creative Writing class in college and I fell in love with writing fiction ever since. I had always liked telling stories and writing poems as a teen, but I’d never written any fiction longer than two pages until “Omi”.

I’m currently working on an epic fantasy/sci-fi (and a dash of horror) novel called “The Gift of Water”. The story focuses on four teenaged characters as they each play a vital role in the struggles of three kingdoms over the most valuable treasure in the world of Solara, water.

I’ve often felt stuck between two worlds on many aspects of my life. I’m a mixed child, so growing up I always felt like I had to choose between being “white” or “black” in order to be perceived as one of them, but never both. Same goes for language and culture, I know English and Spanish, but my family only knows Spanish, so there’s a lot of my current life I don’t get to share with them. The list goes on. I think the tensions of being from two proverbial worlds as well as growing up in a period of extreme poverty in Cuba always comes up in my writing. I often explore themes of identity, isolation, injustice, courage, family love and endurance despite incredible hardships.

5. Authors and books that have influenced your writings?

The first book I ever read (for fun) was Emilio Salgari’s “The Black Corsair”. I was ten at the time and was immediately pulled into this world of adventure, pirates, and swordfights. I loved it so much I read the rest of the series and never stopped reading after that. I draw a lot of inspiration from Chinua Achebe, George R.R Martin, H.P Lovecraft, Edgar Allan Poe, Andrew Sapkowski, and folktales from every culture. Some of my favorite books are “Things Fall Apart, The Last Wish, A Song of Ice and Fire, The Famished Road, and The Old Man and the Sea”. Norberto Fuentes’ “Condenados de Condado” and my grandfather’s accounts of what he saw during the early 60s (the Cuban Missile Crisis, the Bay of Pigs Invasion, and the Cuban Civil War) inspired me to turn a short story I had been working on called “Abiku” into a fullfledged novel. It became “Facing the Sun” which I finished and published last year. I aimed to tackle themes of manhood, love, violence, and maturation through the eyes of an 11-yearold Cuban boy and a splash of magical realism. This story has a special place in my heart as I was born and raised in Cuba for more than half my life.