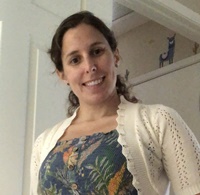 Kimi bit her lip and did her level best not to jump at the sound of something slamming against the counter behind her.

“You’re not welcome here!” said a deep and angry voice from behind her.

She prayed for patience from every major deity of Faerûn in dealing with what she knew would happen next.

“Didn’t you hear me?” The voice grew louder now, angrier.

Kimi turned around and flashed the angry man her most winning smile, though she knew he didn’t deserve it.

“’We aren’t welcome here,’ yes I heard.” While her words were calm and patient, she felt as angry as the man in front of her looked with his tomato complexion and bulging temple vein.

The shopkeeper huffed as he rolled up his sleeves now, making no effort to hide the axe on the counter—the source of the slam earlier. But, viewing Meged up close he suddenly didn’t seem so eager to commit to the aggression. His eyes flicked between Kimi’s slim face to the horrifying and gaunt visage of the giant Wendigo beside her; blood drained from his face, and he faltered in his resolve to eject the pair.

The Wendigo’s dead, eyes were fixed on the shopkeeper. The death spirit lifted his hand towards the paunchy man.

Kimi took Meged’s hand in hers before the Wendigo could touch the shopkeeper and shook her head as the mass of rotting flesh turned his gaze down to her. The pair continued to hold hands before the shopkeeper, Meged exuding death and decay while Kimi radiated with peace and life.

Kimi’s anger dissipated upon seeing his discomfort. “Forgive us,” she continued.  “We are only here to get supplies and then we’ll be on our way. Can you, perhaps, help us expedite our shopping?  This is what we need.” In her free hand she held out a small square of paper with equally small writing.

The shopkeeper, still transfixed on the spirit of death before him, trembling.  Through his fear he summoned the strength of will to lift his hand and point at Meged. “Wha… What…?”

“What is he?” Kimi finished for him.  She lowered the hand holding the shopping list and looked up at her companion.

From the top of his antlers to his cloven hooves, Meged stood 7.5 feet tall.  He had a head of a fleshless deer head with dead burning eyes that never blinked.  The flesh from the rib cage to the hip bones had rotted away, laying the intestines and other organs bare for all to see. The bottom half reminded Kimi of a giant goat, including a cute little tail.

But overall, she could see why people were upset when they saw him. “He is my best friend,” she said as she smiled up at the death spirit.  “But,” she continued “I think it is safer if you don’t think of him that way. Wendigo’s don’t often have best friends. Meged’s special.”

She slid her hand from the demon’s massive claw and stepped forward to close the gap between herself and the shopkeeper.  Setting the shopping list on the counter first, she put both her hands on the larger man’s shoulders and turned his body to face him away from the Wendigo, but the man’s gaze remained locked on Meged’s unblinking stare.

This wouldn’t do. “Sir,” she said in a failed attempt to gain his attention.  In the end she had to turn his head for him, so he faced her. “Sir, please.  I need you to focus.”

With his attention on her again, all the force of his personality returned, and Kimi could see his complexion turning red as his incoherent splutters gained meaning.

“You and your THING had best leave here immediately!” The shop owner spat.

She sighed.  Sometimes there was no reasoning with people. She turned him to face Meged once more, patting his splotchy bald head. “There’s a good man.  You enjoy that staring contest while I figure this out.  And you,” she turned her attention to Meged, pointing a finger up at the Wendigo. “He’s not a snack.  No touchie.”

The rotting death spirit snorted and tossed his head, a gesture which reminded Kimi of a horse’s.

“I know. I know,” Kimi said. “I’ll figure it out.  But we can’t have this whole village after us and if you eat him, we’re done for.”  She sighed again and looked around, retrieving her shopping list from the counter without thinking.  Then she saw it; on an announcement board, at the far end of the counter, she saw an advertisement seeking adventurers to clear out an encampment of rogue soldiers led by a warlock.  Plenty of snacks for Meged to eat and no one would get upset about it plus a pay day.

Kimi, excited at the prospect of a short term brighter future giggled and went to retrieve the announcement from the board. On her way back she hugged Meged from behind, oblivious to his rotting flesh and the iron-tinged smell of blood which always lingered in the air around him. “You watch him, ok?  I’m going to hurry and get some supplies.  But NO TOUCHIE!”  She said with emphasis as she began to move in a hurry around the store.

Meged huffed out a response.  The obedient Wendigo stood in the same place holding the shopkeeper in a death stare.

It didn’t take long for Kimi to get everything she thought they needed gathered and packaged for travel.  She put some money on the counter and made for the door. “Alright, I think we’re ready.  Let’s go.”

At her prompting, Meged turned and joined Kimi at the door.

Kimi sighed and slipped her hand into Meged’s. They left together, a vibrant young woman walking hand in hand with a decaying death spirit, leaving the shopkeeper crumpled in a nervous heap on the shop floor.

Olga Collazo Perez spent twelve years in the Marine Corps writing intelligence reports and is now studying to be a creative writer. You can follow her on Twitter at @OlgaCP2