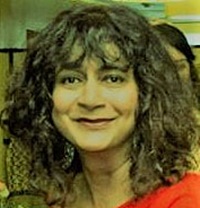 ‘We swung over the hills and over the town and back again, and I saw how a man

I saw the machine, a silver-sheathed air rover, and my eyes glazed over. It looked

so small like a mechanical toy glued in place, held together by movable parts, dolphin-

size, let alone two. It was a beautiful morning in February. The outside temperature was

0 degrees. I was bundled up. We were at a hangar for light planes in the outskirts of

Chicago, on a bright winter day living up to its reputation as only the ruthless windy city

of Saul Bellow can, winds gusting briskly, and I was with my kid brother, not a kid any

which would heft us into the air.

“Just don’t step on the wings when you’re climbing inside,” he said in that

pragmatic manner he reserves for nuance. I was not planning to move a foot. The bucket

seat looked no wider in width than a child’s car seat. “I won’t,” I replied with a smile and

a wave, deciding I had better stay focused on my camera and circling the aircraft for

some good shots, and leave the preps to the experts.

“What’s that you have in your bag?” my brother inquired, too casually. Putting me

on the spot creates more bumbling in public, with me playing the victim, than I care to

recall. My burgundy and tan leather cross-body, my absolute traveling companion, on 72

hour journeys from point of departure to final destination, does tend to gain weight

whenever I am overseas, on account of the various bits and stuff that accumulates, some

from previous travels, others from a couple of decades ago, which I have not emptied.

The more vintage the look, the harder I cling to the scrap. One time I used to have a large

canvas carryall tote which could bloat, then grew too heavy. He knows me too well to not

give my bag serious consideration. However, my assumption was he had been referring

to the couple of Dostoevsky’s hardbacks buried deep, which I had borrowed from the

library for this trip. “We don’t need those,” he said without further ado, handing my bulky

volumes to the hangar-manager. Without my books to clutch I turn into liquefied butter.

My heart skipped a beat. The manager of the hangar was jovially making small

talk, issuing routine instructions for flying the aircraft, traffic procedures, when he finally

caught the look on my face, or my gut nervousness registered. He switched gears as

Sullengerger, the hero-pilot whom the world knows, and resorted instead to making me

feel at ease, inquiring whether I had flown in a small plane before. Of course I had not! I

did not need to shout it to the world. Images of Airport and Jet Storm flashed through my

mind in sweeping horror, together with at least eight other terrifying air disaster movies I

are airborne over a sheet of ice. Including snakes. I gulped, letting my brother do all the

talking. Let’s be honest. For a woman from India I was managing well.

I am not squeamish, never have been deathly afraid of heights, not even when I

magically floated up the French Alps at Mont Blanc in the Aiguille du Midi cable car,

gazing at icy precipices far below, which had me re-reading James Hilton’s Lost Horizon,

for its spiritual lift, but I understood speed and velocity, head winds and groggy engines,

alleviate my own. My brother in the meantime was reveling in the moment, in the signals

he was receiving, being the first in our family to fly a small plane, a big first, his undying

interest in cars only outdone by his glowing pride in his latest acquisition, a six-seater

Beechcraft, and his joy at taking me up. He had flown a bunch of times to Syracuse and

back, knew his machine, and could be relied upon to give his bookish sister visiting from

the ‘boondocks’ of SE Asia, a short joy ride over a cold shimmering lake. Lake Michigan!

sibling rivalry-comfort-childhood-closeness that defies description, although I was the

oldest in our three-angle triangle, the reverse of Scout-Jem, not counting Dill. If it must

be examined it would delve deep into our childhood growing up in Bombay, having lived

city-folksy, in limited crowded spaces, where the toys we played were of a kind he could

easily rip apart and re-construct out of wires and scrap metal and odds and ends. My first

clay doll was putty in his hands, broken, torn up, except for her pretty face, setting dead

limbs right. Beats me how he did it, what stood him out, how adept he grew, but his

expertise at calibration and calculation was out of this world. He should have been an

engineer. When he needed me, I heard, not in words, but in the spaces between, in the

instant, the rush to connect, although we’ve lived continents apart most of our adult lives.

I understood how much he wanted to fly me up that day, to capture his moment

for me, one that would never recur for the both of us, because I had three continents to

cross to reach my home in Malaysia where I lived back then, and I felt like a microcosm

of the skies, Homer’s planet swimming in its ken, waiting for the stars to align, and

incredibly, I agreed. Later I would learn that had the weather been totally impossible to

undertake the flight, or too hazardous for a first-timer unused to the risky rock-n-roll

exhilarating motion of a small aircraft, the manager would have refused the turboprop be

rolled out of the hangar. He has the final say. I stared at the sky. We all did. All clear!

So, on that particular day the wind sock was our decider. We clambered into the

cockpit, my brother started the engine, which gave a healthy sound, and we lifted off.

with the vast gray of the lake we climbed. We had to stay low, under international airport

O’Hare’s airspace, billed as the busiest airport in the world, with take-offs and landings by

today’s standards at one every ten to fifteen seconds, so as not to interfere with

commercial flights frequently landing and taking off in this huge city. Anyone who has

the winter has to marvel at the sugared ice frosting, glinting from below under a weak

sun. It is an incredible sight.

We both wore aviation headsets, my brother maintaining a running dialogue

which I was encouraged to enter through the speaker system. Later I would learn it was

more of a precautionary measure to protect my ears against noise damage, and to stay

alert and engaged, although at the time I thought it was to communicate with him. In a

few short minutes the downtown was passing beneath us, and we had gained sufficient

(formerly Sears Tower, a name I am more familiar with) rising up high into the sky like a

King Kong remake. Unreal, I yelled into my headset, pointing, we’re dwarfed, since our

puny little silver shadow was literally flying below, and I waved excitedly at people I

He described various switches to me, how to read the monitors, which gauges did

what, info overload I would scarce remember. My distraction was the sights which

passed in less than the blink of an eye. Approaching Navy Pier at 2000 feet I think was a

true privilege, the breath-taking lakefront playground sitting intractable below us like a

Our little silver shadow was humming nicely, but once over the open lake, the

headwinds blew so fierce I signaled I had had enough. We had flown far out. Below us

was a sea of gray, where the sea met the sky winking unceasingly, wobbling glassy in

the sunlight, no skyline visible. We turned around sharply, the engine noise so unfamiliar

at the apex of the turn I thought we were disintegrating mid-air. My brother gave a

thumbs up, a broad smile wreathed all over his face, and I was reassured.

The return was swift because we had a brisk tail wind. We had started our descent

and I wasn’t aware till my brother asked me to spot the runway for our landing. DuPage

has four active runways and I tried. At first I didn’t know where to look, left, right, centre,

off-centre, the plane was bobbing crazily at a fair rate of speed, energized with fuel,

giving some nasty jolts, it made location visibility impossible to detect. There were no

landmarks either. Reflexively, I imitated his stomach-twisting actions, pulling my arms

taut, gripping the control wheel shuddering in my grasp. I guess he had the flight path and

the ground rising swiftly to meet us in his sights, because he sure the hell knew exactly

The wing tips swayed wildly in a final see-saw motion. But it was the pilot

controlling the plane. All I could see were lines of trees. Flat open spaces. More green.

Where did all this shrubbery spring from? I could scarcely recall a Chicago embedded in

such scrubland greenery. My brother got a huge chuckle from the many comical

expressions registering on my countenance, with some confident throaty noises of his

own. But he was all hard-boiled concentration. Time for the guffaws later. It was a

smooth landing by all accounts, and before I knew we were down. And my maiden

was at hand to greet us heartily. He had watched us land and could not compliment my

brother enough, man to man, pumping his hand like he would never let go.

My talkativeness could not be contained either, was in overdrive, suctioned out,

where earlier I had been quiet, now that I was on terra firma, my feet solidly planted on

the tarmac. I could breathe. Contain my loudly beating heart. Recover my abandoned

books. Bury my nose in a heavy dose of Crime and Punishment. Self-reflective as usual I

would brag to Ray about the shimmer off the lake, dropping out of the sky, hurled like a

lightning bolt, down-drafting with the ghastly winds, my brother’s astute control of the

Beechcraft, and my range of silver-shadow splits of my guessable flight. I guess the

longer he heard the more unstoppable I grew.

from a side table. I look up at stone colored skies in the depths of winter and it is of the

thrum and glide of titanium internals I think. I could not be prouder.