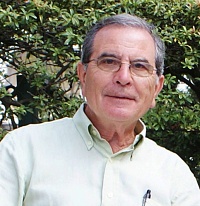 Playing in front of her house, a little girl sets wildflowers in earthen pots pretending to be a gardener. She lives with her parents in a red-roofed village, a quiet place with a population of scarcely nine-hundred people, located in the Valley of Lebanon, Cantabria, at the Peaks of Europe’s foothills, where many are farmers or artisans, and young children attend the same school.

This spring, the girl has turned seven. Her eyes are black, shiny; her hair dark, cut short, and her complexion pale. An innocent smile betrays the void left by two missing baby-teeth.She feels intrigued about the world around her and often ventures into her surroundings: enchanting hills, evergreen trees, winding streams. She loves the birds and all the other little animals she sees and enjoys watching tapestries of poppies, daisies, campaniles, and other wildflowers that spread around and breathe in their fragrance.In her outings, the little girl sometimes reaches the nearby Monastery of Saint Toribio, inhabited by Franciscans, a pilgrim destination, and wonders about the friars’ mysterious lives.

One day, this spring, the little girl came across a picturesque small house beside a narrow creek near her home. It called her attention because the roof was painted dark blue, the windows’ frames green, and the entrance door red, all of which looked different from the other village houses, stone-built and red-roofed. A woman was sitting in a folding chair outside this house, painting. Full of curiosity and careful not to be seen, the girl moved behind the artist and observed her actions. The woman-artist repeatedly looked at the poppies and daisies growing about her; then, she turned to her canvas and painted them as a bouquet. But some flowers seemed well-shaped and neat, while others appeared blurry. Such discrepancy struck the little girl as odd. She was about to ask the artist why she did that when a black miniature poodle suddenly came out of the house running toward them, barking.

“Rosie!” The artist called out.

The poodle, wagging its tail, went straight to the girl who, apprehensive about the dog’s approaching, hurriedly asked the artist, “Why do you do it?”

“What?” The painter turned her head in surprise.

“You paint some flowers looking fuzzy!”

“Because that’s how I see them.”

At that point, the poodle playfully jumped up at the girl as if wanting to kiss her on her face, but she got scared and ran away. For a long while, though, she in vain tried to understand why the woman-artist had painted some of the flowers looking nice and others blurry.

A few days later, this girl was wandering the countryside in the company of a little friend her age. They entertained themselves gathering pinecones and catching butterflies when, absentmindedly, they reached the Monastery. The little girl shared with her friend that she sometimes went inside the court-yard with her dad to deliver bread—her father owns a bakery and supplies the friars with the daily bread.She enjoys stepping into the court-yard and loitering about while her father does his business.

Presently, both girls fantasized about the friars living there. Driven by their reverie, they searched for a way in and found a rusty iron gate camouflaged among the fern; surreptitiously, they entered the cloister and hid behind a column. Quietly standing there, they spied on a Franciscan friar strolling in the portico. They heard him saying to the air: We only see part of that which is whole. The girls chuckled; they understood each word but not the meaning of the utterance. At that moment, the friar started to walk towards the column behind which they were hiding, which made them very nervous because they understood that the monastic would tell their parents if he discovered them. Therefore, they ran towards the same iron door they had entered, and they left the place.

When the little girl returned home, after she and her friend had fled the monastery in a panic, she saw two large glass jars half-filled with water lying on top of the dining table. A neat red poppy, its stem submerged in water, rested on the rim of the taller jar, and two fuzzy-looking yellow daisies had been set beside the poppy.Two other blurry-looking daisies, one yellow and the other pink, floated in the other jar. The background of this ensemble appeared undefined.Impressed by this scene in which slant sunlight made that the room looked shadowy and some of the flowers undefined, the little girl suddenly understood what the monk with his words and the artist’s painting meant to express.

Jose L Recio was born and raised in Spain. He studied medicine in Spain and later left for California on an International Fellowship. He and his wife currently live in Los Angeles. Over the last few years, his interest in creative writing keeps him busy. Having grown to become bicultural, he writes both in Spanish and English. With Adelaide’s books, he has published this year a collection of twenty-four bilingual short stories.