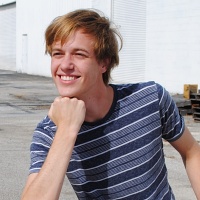 A smack of thunder prompted his eyes to drift open. He lay still a moment, taking this time before sitting up. An hour could go by before escaping bed crossed his mind. Everything took longer. Rain fell outside, muting the light and widening the soft shadows of his tight apartment. He ignored his pill bottles and shuffled to the kitchen, in need of coffee. Dirty dishes stacked high greeted him as they always did in his grey time. A note from his wife sat by the pile: “Wash these, please!” He ignored it. His coffee machine groaned to life and spat out a steaming smelly drink. He sat slow and started his work for the day. It was exhausting just opening the laptop. It was exhausting drinking the coffee. He powered ahead, making sure that he achieved the bare minimum. Perhaps some rest will do me good. Another day done. His mind was asleep before his head hit the pillow. He was asleep before his wife came home, and after she left for work.

He awoke before the sun. Even the birds were asleep. He felt well rested, ready to start the day. He looked around, to find his cat was awake. Her tail swishing, as though her patience ran thin. He threw off the covers and stroked her soft fur, profusely apologizing for his tardiness in an obnoxious falsetto. She forgave him. They snuggled on the carpet until the sun caught up with them. The bright warm patches of sunlight gave the apartment an open feeling. Things were looking up. All of them. His wife was so darling while she slept. He wanted to wake her up. She’s always so fun to talk to.

The daily parade to the kitchen was made more pleasant by the sudden urge to conquer the dish pit. An expected, though over-due, burst of strength and speed made quick work of the task. He listened to a podcast and let the coffee machine heat up while he scrubbed and rinsed the dirtied cutlery. He hummed a song to himself and took note of the Cinderella-y feeling. He made sure not to take this for granted, as it was all part of his temperament. He kissed his wife on her way out and gave her a thermos of liquid love. The coffee breathed even more life into him, and he completed his work early. He spent the remainder of his hours creating, in whatever medium gave him the most glee. When his wife returned home, he loved her until her stamina expired and she retired. Why would anyone take these? He thought, turning a pill bottle in his hands before setting it down. Though he woke up before the sun, he went to bed past midnight, as would be his custom for the coming few weeks.

He awoke feeling giddy, but without any joy. A wheezy screamy jittery giddy that cried and laughed in the same breath. He hadn’t been sleeping much, but he hadn’t noticed. He had energy and that’s all he knew. But now there was no positivity backing it up. No sun in the sky, he looked through his window, into the dark quiet of the city before it wakes up. His sleeping wife’s face wordlessly tormented him for being himself. He peered into his subconscious, trying to find a reason for this discomfort, or a way to stop it. Alas, he peered too far. His brain careened without brakes into a freefall. Skin crawling, heart breaking and rebreaking with a speed that eluded the mortals. A piercing ringing in both ears, and an emphatic auditory hallucination bargaining with him to open the window and jump. Stupid boy, JUMP! He slid open the window with impulsive fervor and his wife awoke. She yelled, diving at him and wrestling him to safety. They both wept.

None of this was uncommon. It was all part of his perennial undulation.