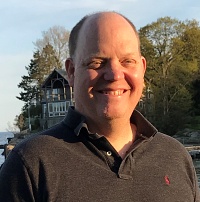 I swim past Whale Rock.
Cold air leeches warmth from rotating arms
That plunge into grey-green sea with each stroke.
Turning my chin, I count, and count again.

Their beaks all point north, into the chill breeze,
Away from me.
Cormorant-devils.
Black birds who fish my waters,
Who from the air spy through sun-glint
Belly-flashes of silver, and then –
They dive, plunge, turn, swallow, retreat up to sky.

One bird, not the biggest but perhaps bolder
Than others, holds wings open, arched,
So that the creature feels the north wind
Under his body, providing a slight lift
And drying force that I imagine
Gives pleasure.

As I swim back, I count a third time.
I think of the rock’s thirteen minds,
The wind’s emptiness,
The ocean slippery and green buoying me up,
And the weakness of my wet body
Surrounded by sea.

The season changes.
I feel it.

Because it fills me, and is not me.

Because I thirst
And mostly we both taste salt.

Rhythm abrades with weight’s force and rumble.
Air fills water with foam. The ocean’s
Body shoulders itself through narrow gaps
Between and beneath overhanging rocks,
Forcing
Lumbering bulk onto and over stone.

It won’t stay.
Water-fingers dissolve foam-outlines,
Whiteness falls as if in shame,
Not wanting to remain where many can see.

We hear an indistinct music –
Grinding and a cushioned wet rumble.
Back and forth we listen to warm salt water
Clutch volcanic rock. Lapping fingers spill
Over the path where your bare feet just stepped.
Froth-arms retreat into larger body,
Slopping down into light-framed green and depth.

Not so many inches deep, in some places not any —
None atop the granite that dimples up
In the garden, puddles rainwater, stifles roots,
Scraped my son’s knee one day, tearing colored overalls –
But that’s rock itself, not this terrapoem.
This ground song surrounds the rock, nests it,
Subtends it, matrix and generatrix,
The soil that soils, dirties, grows, builds, smells,
Stains, burrows into and stays where it gets.
Soil lives on bodies and loves to mark clothes.
As if all our fond works, -culture that seeds
The root agriculture, and poetry’s
Cultured and culturing vectors –
All these germinations, wet and fecund,
Stretch themselves thin and dark and hidden,
Across fields, around rocks, and beneath swamps
Soiling our land.

Steve Mentz is a writer and teacher who lives on the Connecticut shoreline. His poems have appeared in the Glasgow Review of Books, Underwater New York, and in the book Oceanic New York.