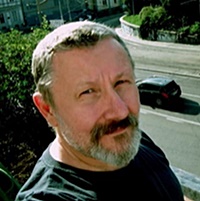 I ate lotus, (Full) Moon cakes,
and yet the memory loss was only
the expected fatigue of carbohydrate cells.
Southern China was not Ogygia, what with the palms,
mangos and the custardy miracle of durian.

The young Jamaican woman from England praised
Jesus between bouts of paranoia that eventually
led her to disappear, wandering aimlessly
the streets of Guangzhou, hundreds of miles away.

An older fellow teacher with a young lover failed at
being a Circe, despite bushels of mind altering substances
taken, failed at being a Cher despite 3 liposuctions and half
a dozen other æsthetic surgeries, and was eventually fired.

I ate lotus, bland and mushy from growing
in omnipresent ponds, swarms of tiny
fish swimming to and fro in shallow muddy water.
Southern China was not Europe, even when I moved to Macau
for a brief bout of teaching at a Roman-Catholic college.

The elderly Kiwi colleague was at times obnoxious,
compensating his feeling of inferiority for having
acquired his BA only in his late fifties, after a career
as a bus driver/amateur archaeologist.

Three hills with tiny forts overlooking the sea failed at
becoming a sheltering harbour to dock in — great-grandfather
in exile to Peacehaven (Sussex) was luckier — casinos failed
at becoming cornucopia, the old priest and his posse were
a bunch of liars, so I had to leave early.

I ate lotus less frequently once I returned
to the garret bachelor’s flat in a nine floor building
in Belgrade’s shabby imitation of a West End.
Southern China was then but a memory,
a few things I had brought over,
and occasional photo posting on Twitter.

I took a room in a poussada on Rossio, in the building
from the picture so glossy, so enchanting, thirty years
earlier, in the coffeetable book of European capitals my
parents bought me at junior high.

The heating at the poussada didn’t work, so I took
half hour long steamy hot showers each evening to
warm up for the night. Not so in the mornings: a
frisky fresh up would do, for it was a warm February
when I went to Lisbon, and besides, I was in a rush
to soak in the golden sun outside, to wander through
museums, where my heels clinked, to absorb the vistas
from hill tops towards the west, gloriously azure over
baroque spire tops.

I had translated Pessoa to Serbian for a local cook-
turned-writer-turned-activist-turned-publisher making
sure I rhymed each Antinous verse, classically sculpted,
yet passionate, according to the original—a pesky job;
it was only just to spend the money I got for it in Lisbon.

I had forgotten the voice of Amália Rodrigues, yet
another straight woman gay male icon, a voice echoing
over the gale that whipped the windows with bucketfuls
of rain, on a gallery above a half of the living room in a
17th century silo-converted-into-apartment of a sad-eyed
man in Utrecht, a man who looked so old when I was 25,
and who, then in his late thirties was a few years younger
than I am today.

Even though I’d expected nothing more than a nice
holiday, I felt I belonged in Lisbon. Not only to Mouraria,
not only to Judiaria, not only to clubs and museums, and not
only to the Brasileira, where, metalic, and absent-minded,
Pessoa’s statue sat, waiting for me to drop by.

It rained, a dozen times a day at least, never longer than
for ten minutes. Quaint old yellow trams passed by, and
I took them, alongside Lisboeta shop assistants and
Scandinavian tourists fleeing harsh winter by saving
money with lengthy stays abroad.

To that too I belonged, after a year on a scholarship, to
the frugal, sturdy, honest North’s wild nature. Probably
the best year of my life was the one in Norway, but
unlike in Oslo, where I was content and at ease, my heart
danced on Lisbon’s steep stone-paved streets, I was at home
in its sombre churches, dark as caves, with small windows
high, high above.

Maybe because of great-grandmother’s grand-mother Sara,
maybe because of the open view across the ocean towards
the Caribbean isles in the sun, a colonial dream.

Or maybe because I needed to leave behind, albeit for a
short while, the sad ostracised country of my birth, which
I had returned to after years in exile, to sneak back into the
illusion of world’s oneness, behind the iron curtain — only
this time of Fortress Europe, to climb the tower of Belèm
to see from its promontory, in my inner eye the island in the
sun, amid the Sargasso sea, waiting, like Avalon, for my
passage over.

At night, through dimly lit lanes, while bullfrogs croaked
in five of the nine ponds I passed on the way and in the
cellar of an unfinished teaching building, I would walk
back to the apartment hotel of the first modern university
in Southern China, first constructed in the 1920s, but
constantly rebuilt, in that typical Chinese—and Dutch—
obsession with refurbishing, where I worked at the time.

I᾿d carry persimmon, mango, or rambutan in my backpack,
sometimes the, triangular at cross section, “hill bananas”
that I had bought at the green grocer by the East Gate, one
of four campus gates, named for the cardinal directions, as
it is standard for streets, city quarters and gates in China.

The jasmine-like smell of something that my students
insisted was not jasmine but an “egg tree” and the loud
sound of male frogs calling potential mates like in that
forsaken, dear faraway old town in East Serbia, whose
mayor great-grandfather had been before World War II,
and where his father had built a public fountain, was the
closest I felt to “at home” for the seven years in Asia.

Miodrag Kojadinovic is a Canadian author born and partly educated in Serbia who lived in seven countries for more than a year, including a decade in Asia, whose two collections of short stories have won international awards and are in hundreds of university and national libraries, yet he considers himself primarily a poet and scholar.