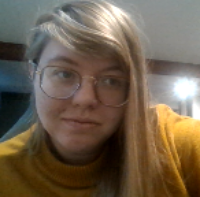 I met myself the day before the Fourth of July. I was sitting in a nondescript coffee shop in my hometown, they’d torn down the deli I used to go to with my father every Saturday to build it. I took a small, sour delight in ordering the cheapest coffee they served and sitting there, taking up prime table space in front of the open window, for hours on end.

No one bothered me, normally, as it wasn’t necessarily popular, but then one day someone did. They pulled out a chair, sitting down diagonal from me, and when I next looked up from my phone, I saw her. She had my freckled skin, pockmarked from teenage acne and sun damaged from years on the ocean. When she moved to pull her, my, dark hair behind her ear, she had my mother’s ring on her finger that my boyfriend had just used to propose to me. But beyond that, when I saw her…

I went scuba diving a couple times when I was in college. My then roommate and I had decided to take scuba diving as a way to meet guys, not a terrible idea but we were terrible at it, and in one of the later classes, the instructor took us out along the coast and showed us how to dive direct from a boat. We were still in really shallow waters, though. It was a warm day, and there was something heady in the humidity, the intoxicating feeling of controlled danger.

I’d gotten into a fight with my roommate that day over something silly, so I was ignoring her, and probably swam out further than I should have. I don’t remember. I just wanted to be by myself. So there I was, down under the water, not too far away from the boat, but far enough that I could make believe that I was all alone. Scuba diving is mostly a solitary experience, anyway, and we were all connected to the boat by tethers regardless. I closed my eyes, and just listened to the rasp of my equipment.

Then, I felt something move. Obviously, I’ve had close experiences with various marine wildlife. I dive, it happens, so I know enough to know when something big is coming. But when I opened my eyes, the big was all around me. I saw thousands of eyes, painted on an ever moving surface. it was so bright and so dark all at once and all I could focus on was my heart pounding in my ears, and the feeling of something tightening around me and sliding past me, over me, seeing me, watching me, knowing me…

Then it was gone. And I was alone. I swam immediately back to the boat, and when I got back the instructor informed me that a school of fish had been chased into the shallow waters we were diving in.

When I saw this woman, I felt those fish. I saw those thousands of eyes, and felt the intense pressure of being known so fully that it feels like who you are is being pushed out, and whatever’s left is nothing but the husk that is you. I can tell you this woman was me the same way that I can tell you the sky is blue and the worst food to eat when you’re hungover is leftover sushi.

Then she noticed me, and turned her body to face me. I was so aware of her, of every move she made, she put her hands on the table, crossed them over each other. One had the ring, the other had a bandage with some ugly princess cartoon I’d never seen before. Her nails were so clean. I felt the blood rushing through my head, my skin felt so tight.

Then she smiled at me, and leaned in, staring at me from the eyes that I’d never seen really were slightly uneven and she said, and I never realized just how much I sound like my mother but, she said, “you will survive this.”

Then the world went dark for a moment, and then it was too bright. I heard a scream that I think was mine, or at least came from my mouth, and my legs were in the wrong place, and there was smoke, and then, once again, it was as blessedly dark as the open ocean.

The next time I woke up I was in the hospital, and in so much pain I couldn’t even think about her. I couldn’t think about anything. My mom was there, and she told me, in pieces over many days, that a drunk driver had crashed into the coffee shop and sped off. They never found the driver.

When I broached the topic of whether there were any other victims in the accident, my mom informed me that there had been a few other people in the accident.

“What about any unidentified people? Women, specifically,” I asked. My mom sat next to me in the hospital room, her hands braiding her hair over and over again. It was a nervous tick, I knew, and in the silence that followed my question she began to speed up.

“I don’t know,” she answered, her eyes not meeting mine, instead looking past me at some point on the wall.

“Are you sure?” I felt that strange tightening again, that pressure that made my body feel like a container of rotting food. A spoiled, bloated thing, ready to burst.

But my mom just nodded, and ran her fingers through her hair. I was a bit worried if I pushed too hard, that her hair would fall out, so I let the question drop. She was a rather delicate person, and I figured that if I had a secret twin that had died in the accident, she would tell me.

I began to feel as if maybe I had simply lost my mind in the accident, or before it. It wouldn’t be so strange, I thought. I had been in a coma for the last week or so, and had sustained spinal injury that caused me to lose all feeling from my pelvis down.

It took me a week to cry. I guess I just couldn’t get my emotions to sort themselves out, and instead they just built up inside me, so when I cried for the first time I wept. Huge heaving sobs that tore at my stitches.

I thought of myself, then. The one in the coffee shop. I couldn’t remember much from that day, or that week, but I thought about her words.

“You will survive this.”

There was something comforting in what she told me. I think, looking back on it now, that maybe that she was just my subconscious, possibly constructed by my desire to live. Her words were so important to me in the days following my accident. They pushed me through my physical therapy, pushed me through having to let my mother help me go to the bathroom, pushed me through my fiance dumping me because he couldn’t handle having a girlfriend who couldn’t walk. I kept the ring when he left, though, and sometimes I still wear it.

The first day I stood up under my own power, legs shaking and lungs heaving, I thought about her words and felt strong.

After my boyfriend left, I had to get a new apartment, and I decided to move back home to be close to my family. My room was open but mom had sold all of my furniture, and I had to buy a new bed. I went for the cheapest option, an old wrought metal sort of thing that a childhood friend was trying to get rid of, and this morning I cut my hand wide open.

I cursed, loudly, and after my mom begrudgingly scolded me, and informed me that we only had cartoon band-aids from the last time my nieces stayed with her. The face of the big eyed princess stares up at me, now, and I’m really in the mood for some coffee. They recently reopened that coffee place from my accident, and I’d like to prove something to myself by going.

Lauren is a former English teacher who used to live in Japan before recently moving to Chicago. She graduated with a degree in English from Kalamazoo College in Michigan. She loves camping and thinking about swimming in the ocean.