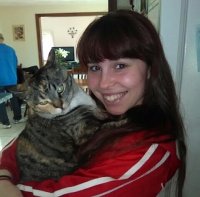 “I Will Be Your Hero”
Fate gives us all pieces to make a puzzle of our life,
They show us our love, our happiness, our strife.
I had enough pieces for my own work of art,
But I noticed you struggled, as if missing a part.
You couldn’t save yourself from the inner battle you fought,
You instead looked to the outside for the savior you sought.
That was when I fell for you, I fell so fast, so deep,
I would do anything to have your love to hold and to keep.
I will be your hero, it that’s what you need,
I will stand by you, believe in you, I’ll fight and I’ll bleed.
I will protect you from anything that would pose a threat,
With me, you would have no worries, no reason to ever fret.
But puzzles change over time, as life does, too,
I found I needed to change myself so I could better fit you.
Your picture was transforming as the years went by,
I guess it’s true what they say, you have to let your heroes die.
So you can be your own hero in this convoluted story,
I wasn’t supposed to be center stage, you needed your own glory.
It’s then that I realized it’s not love that you need,
But someone who knew just how to make you bleed.
You needed someone to feed off of, someone to hate,
After all, it’s victory over evil that makes a hero great.
I will be your villain, if that’s what you need,
I will torment and torture you, make you fight and bleed.
With every move I make I will pose a threat,
I will keep you on your toes, give you every reason to fret.
So in the end I will be what you need me to be,
Your hero, your villain, there is no real me.
For you see, I no longer have enough pieces for a puzzle of my own,
I’ve squeezed all my pieces to fit you, so your puzzle could be shown.
And the only thing I’m left with is the knowledge you’ve never known,
Of how empty it feels to be left all alone.
“Usurper”
I walk the long hall,
Once so familiar to my mind
Now the faces that line the path are strangers,
No warmth or welcoming do I find
My echoing footfalls come to a halt,
On the cold, unforgiving stone
Surrounded by a mass of people,
Yet I stand alone
The fake king grips the arms,
Of my once throne
Now it is my life on trial,
For him to condemn or condone
A new crown of polished gold,
Sits upon his head
He rules over all,
In my stead
Without saying a word,
He tosses on the ground
A clink of tarnished gold,
Is the only sound
I look down upon,
My shattered crown
Handled like trash,
Broken and thrown down
My eyes linger on the crown,
A symbol of what is lost
I think of my actions,
And all that they cost
Then I meet the usurper’s eye,
And find humor in the blue
I am a joke to him,
But perhaps a lesson too
These strangers are his,
That sneer and glare at me
But he was once mine,
And what must be will be
He motions with his hand,
The fake king decrees
I am shoved to the ground,
Brought down to my knees
I have submitted myself,
As all can well see
As I once ruled him,
Now he rules me
Will he learn as I did,
The corruption of power
How you can build yourself up so high,
But it takes just one stone to collapse a tower
The people who once adored me,
Now demand my head
Their once beloved king,
Is now only wanted dead
The fake king shrugs with a smirk,
Asks what is there to do
Then he laughs in triumph,
But I laugh too
I can see him falter,
His smirk does not stay
For he does not realize,
I still have one more card left to play
This usurper was foolish,
He thought he knew all my tricks
But he made his palace out of straw,
When he should have used bricks
And I know that playing with fire,
Is considered a sin
But the only time I accept losing,
Is when I know no one else can win
All these people are strangers now,
No one I hold dear do I see
So if I must burn,
I will take them all down with me
This fake king thinks he can get away,
But I am his bane
I shall go down smiling,
Knowing that no king will reign
Only ash shall remain,
Ruins of what had been
And thus ends just another story,
In the history of men.
“Monster”
I am a monster
At least that is what I was told
But it was my fault for believing
In the lie that they sold.
Some say monsters are born
Others claim they are made
But it’s the monster who knows what he is
That makes people afraid.
They know exactly what they do
They know exactly what they say
And they know that mischief and misery
Are games that monsters play.
But does it make me a monster
Because I had to learn the game?
For an act of survival
Am I to blame?
Or did my adaption reveal a truth
I had long hidden within?
Did I become a monster
Or did the monster already inside just win?
I didn’t like the game
But I refuse to lose
Sooner or later
We all must pay our dues.
So I play the game
And I play to win
Maybe that makes me a monster
But I do not think it is a sin.

TO OUTLAST by Michele Parker Randall