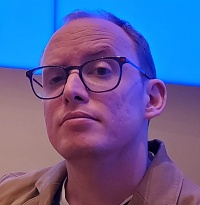 The elevator door opened. It was thoroughly unremarkable, as many apartment elevators would be.

A red pleather jacket over a gray hoodie entered, eyes glued to his phone. “Can you push two for me?” he said.

The other person leaned forward and pressed the button.

He turned towards the source.

A tan canvas jacket over a comfortable dress that wore a particularly rough scowl.

He hurried past her, panicked he pressed the “door open” button.

But the elevator had already began to move.

He took a step back, resigned to his fate, at least this would only take a few moments before he could escape.

The two stood there, staring at the walls that confined them, they had scuffed features, likely from a tenant moving furniture. They waited for their imprisonment to pass.

Then the cliché, with a jerk the elevator seized.

“Of course.” She looked up and rolled her eyes.

He rushed to the console, pushed past her, frantically he pressed buttons, pleading with the chamber to continue its journey.

“It’s stalled, mashing away isn’t going to do anything,” she said.

“Well, what should I do then? Just wait? Be stuck here? With you?”

“You know what I mean, you don’t want to be trapped in here either.”

“I could certainly think of better company.”

They glanced at each other, then quickly looked away.

“Isn’t there normally a call button or something?” she said as she moved to the other side.

He searched the console, his face lit up at its discovery. He pushed the button. “Come on God, please someone be there. Hello?”

They waited, only silence on the other end.

“That is not an option. I have somewhere I have to be.”

“Anywhere that is not here with you—”

“Nice.” Her eyes wandered around the elevator, she spotted the hatch above them. “Should we try that?” She pointed to it.

He tracked her finger to its target. His expression shifted from hopeful to annoyed. “You learn how to fly recently?”

“No thanks.” He turned away.

“Yup, I’ll wait.” He inspected the door as if it were the most interesting thing in the room, really, he was just ignoring her.

“Don’t you have some place to be?”

“Well, I do.” She motioned to her suitcase.

“This is both our problem. We are trapped together in an elevator.”

A chuckle escaped his lips as he turns towards her. “Oh, are we? I hadn’t noticed. I thought this was the beach.”

“Always? How would you even know what I am always like? That would require you to be around, ever.”

A sudden and cold silence filled the chamber.

“Save it.” He stepped toward the center of the chamber and crouched down, his hands cupped he motioned them towards her.

“Okay…” She stumbled as she slid off her heels. She approached, placed her arms on his shoulders and right foot in his hands.

In one motion he heaved, her familiar scent filled his nostrils at such proximity. He paused, then he lifted her up.

She pushed against the hatch, undid the latch and opened the small door. Then pulled herself halfway through the opening. Outside the cell she could see that they were stuck evenly between two floors.

He looked up, scanned up her legs, then quickly, he turned away. “Ahem, well?” he said.

“We’re in the middle.” As she called down to him, her arm strength gave, and back through the opening she fell.

A sudden weight crashed down on his back and dropped him down to the floor.

The impact shook the chamber.

Frantic, she hurried off him. “I am so sorry.”

“It’s fine.” He stood up and dusted himself off before turning his attention to her. “Are you hurt?”

“I’m alright,” she replied and checked herself to confirm. “Well, that didn’t exactly work out the way I had hoped.”

“Honestly, you watch too much TV if you thought that would work.”

“I feel like the last time we saw each other, there wasn’t much left to add,” his tone became sharp.

“I know that, obviously.”

“I don’t have anything to say about it. You already know where I stand.”

“Good. Then there’s nothing left to say.” He approached the console again and pushed the emergency call button. “Someone has to be there! Hello! Anyone?”

“They probably got a maintenance call.”

“Or he’s sleeping, the dude sucks.”

“Enough of what exactly?”

“We are both stuck here, this must be the universe saying something.”

“That the maintenance in our building is awful?”

She stepped closer to him and stared him directly in the eye. “I am sorry.”

He just stared back. His blue eyes met her hazel.

“But you were awful too.”

“You were cold, you never just talked to me, and you bottled it up until you popped. And here we are. So be mad at me, blame me for how I wronged you, but at least own your share.”

He took a moment, surprised this conversation was actually happening. He wanted to argue, he wanted to come up with some counter. But there was nothing. “You’re right.”

She took a step back in disbelief.

“I added my fair share to our troubles. I never opened up. I took everything as a personal offense and never stopped to consider how that affected you. I couldn’t see past my hurt. I couldn’t see you,” he continued.

Dirty blonde hair framed the freckles on her face he knew so well, looked back at him.

Then, with a jolt, the elevator started moving again.

Finally, it stopped at the 2nd floor, the parking garage. The door slid open.

He moved towards the entryway. “Hey… Thanks. I’m glad you said something.”

He waved, then walked through the door, which closed behind him.

She put back her heels back on. While waiting she looked around the elevator, the scuffs dings and scratches weren’t there, maybe it was a trick of the eye. She was distracted earlier after all.

The door opened to the first floor.

She stepped out into the hallway.

The elevator door closed behind her.