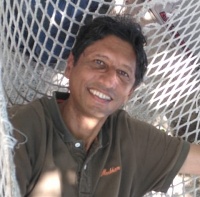 He is a parrot, our neighbour’s bird.  But don’t ever call him one.  He becomes touchy and  will reply emphatically from inside his cage that he is an African Grey.  I took note of it and so in the next visit I remembered not to call him a parrot.  Instead I greeted him jovially with a hello to you, Galah.  I tend to confuse the African Grey with the Australian Galah, both of the parrot family.  The mistake was costly and the retort, delivered in a pompous tone, was immediate.

I was astounded, not to say confounded.  The Galah is a pink and grey cockatoo bird widespread in Australia but it also means idiot in Australian slang.  So it makes perfect sense to use the word ‘twit’ as a response to ‘idiot’.  All fair and square.  But how could he could possibly understand concepts like being an idiot or not, let alone a galah, a slang word not even listed in most dictionaries.  Admittedly, he did grasp the meaning of sunflower seeds, chips and corn-based crunchy snacks, all food delicacies to him. He would call the cat by her name to taunt her, meow back exactly as she did, would even cry out loud the word lettuce as soon as he saw Tico, the lettuce-loving turtle.  In all, quite a fun character he is, the African Grey though his level of understanding was starting to unsettle me.

He was now slowly tilting his head down in an oblique direction while scrutinising me all the same, his eyes rolling upward to keep me in his line of vision.  Like he wanted to gauge my emotion after his retort.  So I laughed tensely to release the uneasiness that had taken hold of me.  Immediately he started bobbing his head to show joy but more likely to scoff at my nervous laughter.  My ego took a knock.  I lost it and while leaving, could not help letting out in a sarcastic tone,  “A naughty boy stays behind bars.”  Disarmingly, he greeted me out, wishing peace be upon me.

Bashir Cassimally lives on the Island of Mauritius where he loves to do gardening, go hiking and snorkel.  He writes for local magazines and has been published in Brittle Paper, The Island Review, in a poetry anthology, Love and in an anthology of COVID stories published by the Arts Ministry.  He is lucky, now that he’s a retired engineer, to be able to devote more time to writing.