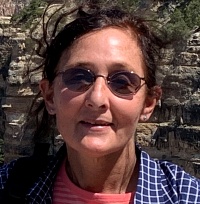 How many times had I scrubbed until my fingertips were raw and blood trickled into the wash water?  Any witness to this stooped washerwoman would have seen the emotional precipice I teetered on.

First, I would clean the sinks, then the countertop and stove. I moved on to the appliances, the cabinets, and the floor. The scrape of the nonabrasive sponge and the swish of the rag in the cleaning pail followed an internal rhythm. I scoured and rinsed until the smell of bleach and Pine-Sol permeated the house. It was nauseating and never did anything to erase the bitter taste of anger which I gulped so hard it settled and seethed in my stomach.

Lydia and I fought with passion and intensity.

‘How could I have such fury at my own daughter?’ and, ‘when did we start shouting?’ cycled through my mind in perpetual motion.

My experience as a child was that loving mothers lived on TV. My mother tolerated my silent and distant Korean War veteran father but frustration at the isolation and suffocating role of a 1960’s homemaker had shown itself in periodic cruelties.

“Sit,” she commanded as blood flowed across the callouses on my palm and dripped into a small pool on the floor.

Banishment to ‘the chair’ was punishment for breaking a windowpane in our back door. I was seven and in charge of my brother Michael, who was five, and baby Stevie while my mother ran to the store.  Michael locked me out and wouldn’t open the door. I was terrified something would happen to Stevie. I smashed the glass and turned the handle not even noticing as the jagged shards sliced deep into my palm.

My mother hadn’t been willing to hear my reasoning. All she saw was the broken glass. And so, I sat for what seemed like hours with blood snaking down my hand and hot tears on my cheeks.

When I became a mother, I spent most of Lydia’s early years worried that somehow this cruelty could be passed down genetically. I cut myself off from my daughter and denied her the soft embrace of love I felt for her. By the time I noticed her pulling away during the occasional bedtime cuddle and a book it was almost too late. The ‘I love you mom’ was a cool reflex at the end of a call to let me know she wanted to stay at another, warmer, family’s home for dinner.

The grooves of my self-deprecation were as well-worn as the floors I scrubbed. I wasn’t affectionate. I rarely hugged or cuddled. I lived my fears in compulsive cleaning, and routines that I thoughtlessly passed to Lydia. I never even noticed her pain or anger. I never saw her except as a reflection of myself. I was a bad mother. My daughter spent her childhood teaching me to love, until my first trip to ‘the Sandbox.’ My deployment for Desert Storm was the catalyst for raised voices and rising tension.

I stood with my palm pressed against the door.

The door opened. She walked around me with exaggerated care.

I stood with my eyes locked on a pattern in the floor panel and my jaw jutting out. I held a stack of recipes for the favorite foods I was teaching her to make.

“Why didn’t you tell me you were deploying. You must have known. Why did you tell me the day before you go?”

My only explanation was that I was a coward. I was afraid of just this.

While I was gone, I could take shelter in the cold, numb detachment of trauma care. I wrote Lydia every week, sent recipes, asked her about school, friends, Christmas, her birthday. She sent one letter in return. She had developed her own form of numb. Now I was on the outside of her life.

When I got back, I sat close, forced hugs, and made ‘I love you’ the end of every conversation. She used her anger as  a shield against my love. ‘What do you care, you left me,’ and, ‘One day here, then you’ll be gone,’ were thrown around our tiny rose-colored kitchen along with my recipes, pots, and pans. The symbolism was clear to me. We don’t share that connection anymore. She was always careful never to throw anything directly at me and never throw anything that would break.

Less than a year later I welcomed a new grandchild into the world with equal parts joy and terror. Lydia was a teenager. So was the father who was off fathering another child before Robert was even born. It never occurred to me that she would get pregnant. She signed a chastity agreement by her own choice. She mentored other younger girls to stay clean, sober, in school and not fall into teenage motherhood. I had so many worries. Could she do it? Could I do it?

When they put the baby on her belly, she held her first son as he pushed his head deep into her bosom and tried to suckle. They slept like that for a year. The hurled obscenities of her youth were replaced with soft murmurings.

‘Look mom, look what he can do now. He smiled when I smiled,’ or, ‘he held up his head,’ or learned to crawl, or took his first steps.

I thought we had passed into a time when the Tigger ringtone of her call inspired my curiosity rather than dread.

Then a fist of buried rage hit the windowpane of calm. Jagged shards splintered across our lives.

“Your so fucking stupid, get out of my face!”

I ran towards her raised voice a half a house away, but not fast enough. As I got to the door, I saw Lydia push Robert hard. He was barely a toddler and lost his balance. I heard his head crack as it hit the corner of the doorframe.

I held a cool cloth to his bruised head and tried to sooth him. Silent tears ran down his face. He didn’t even know enough words to ask what I knew was in his heart. ‘What did I do wrong?’

“What are you doing? This is your son,” I was shouting too. Blood beat so hard against my inner ear I could barely hear myself think.

“No you’re not. Not like this. You think you can just do this and then leave?” my vehemence  must have carried halfway down our quiet street.

After that night Lydia was home for every birthday. In between I would text her phone when he passed another milestone, spoke his first sentence, started preschool and then kindergarten. She would be home for a few weeks and Robert would shine like a full moon basking in his mother’s sun.

Then she would be gone, and I would be left with the inconsolable sobs of his abandonment until he fell into an exhausted sleep.

‘I love you’s’ between Lydia and I were a dry creek bed in a draught. I prayed the rain would come again one day.

When she was home, I begged her to give him the love he craved, be the one at Back-to-School Night, the one he ran to with a skinned knee.

Years passed. Her standard reply was, ‘He’s still young, I’ll have time for that later.’

My decisions for Robert were never right for Lydia. I knew our fights left Robert shaking in the corner of his closet, but I couldn’t see past my rage.

“Then stick around and take care of him.”

“Somethings fucking wrong with him. You’re just fucking him up. What the fuck are you doing to my son.”

We played the same scene over and over. On those days I never got past tears of frustration. ‘I probably am fucking it up. I was a horrible mother. Lydia is evidence of that,’ were added to the thoughts in perpetual motion through my mind.

How did we start talking?

I let ‘I’m sorry’ slip through my lips in a lull between harsh words in both directions. No breast beating, just a quiet acknowledgement.

“For what?” she faced me midargument and then paused and asked again, eyes wide with astonishment, “what are you sorry for?”

“For fucking it up, with you.”

“Mom, I…” she left the sentence hang.

She couldn’t say the words that we both knew were a lie, ‘You didn’t fuck it up.’

I filled the space between us with ‘Had I only known: what it was like to be an only child of a single parent and then to have me leave, to live with a fathers rejection, to never have teachers favor you, not the bright one or the one from a ‘good family.’

Wary of more than five words between us that weren’t jabs meant to draw blood, we eased into chairs at far corners of the living room.

I continued with ‘I wish I would have: held you close when you cried, made sure a loving smile was the first thing you saw in the morning and the last thing you saw before lights out, listened more, talked less.’

It wasn’t a confession. I didn’t expect her to forgive.

“Mom,” she pulled in on the couch close beside me, “I love you…” with a fleeting hand squeeze.

I cupped her hands in my palms and kissed them as I savored an ‘I love you’ spoken warmly instead of hurled through a slamming door, addendum to an argument.

Frances Guerin is an Australian living in Paris where he teaches avant-garde film and visual culture. He has published five books on film, photography and visual culture, and many articles, interviews and essays. His creative writing has been published in Midnight Masquerade, The Ekphrastic Review, Hecate and Herstry, among other magazines and anthologies.