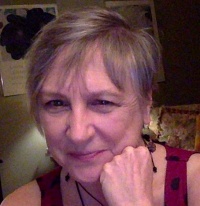 She couldn’t remember the last time she stood in the light. “Always look for the light,” he told her. “The pool of light is here, where you dance your solo.” His eyes reflected magic that wedged into her heart. Lightness was her mission. Delicately she floated over, under, in, and out of the fantasy he had designed only for her. He had made her beautiful.

He was different from other men she had known, unique, alternative, untrustworthy some would say. It was too late to listen. The light had stolen her heart and she opened wide to let it shine through. She made a promise to him. They manifested a being of light.

The theatre was empty the day the lights went dark except for two souls cuddling at the height of its view. She was not one of them. He was, the returning light revealed. Light pools that once bathed her now belonged to other women. His manufactured light no longer revealed her path, now covered with vines and stones. Her movements were strangled.

Where is he so late? It is so dark now, she wondered watching the June bugs alight. The magic light of a firefly is only seen in the dark of its surroundings. Their light turns to nothingness in the bright white of day, like him. She hugged herself tight to infuse hope.

Dreams unfolded into daylight, fireflies gone. The morning light meandered through the white lace curtains of her bedroom dancing delicately as she once did. Dappled light created dark tunnels in the air. She, alone, maneuvered gracefully, in and out, under and through looking for the light of life.

Then it found her, calling her name, “Mommy?”

Professor Emerita Sandra M. Perez, Towson University Department of Dance began studying creative writing after retiring from a lifelong career as a professional dancer, and arts educator. Sandra’s writing reflects her perspectives as a human, child, woman, mother, artist, educator, and mystic. She lives in Maryland among nature with her cat Phoebe where she continues to teach Wellness through Dance, study tarot, and to pursue her lifelong passion of telling stories through movement and words. Her story “Wilderness” was recently published in the International literary magazine “Adelaide.”