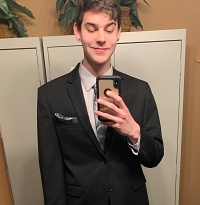 It was the day of my mother’s funeral. It was raining that day. The rain and wind combined and smashed along the church’s windows. It sounded like a baseball bat whacking into a steel plate. I practically looked at the ground most of the time. Everyone walked up to her casket to pay their respects. Some looked familiar, but most of them didn’t. Mom wasn’t good at keeping friends. She kept me close. That’s what made it even harder to be there. I was asked to write a eulogy. I didn’t know what to say or write. When I was called up to speak, I panicked.

I ran out of the church, not caring about the rain or anything. I wasn’t even outside for ten seconds, and I was drenched. I ran into the woods, slipping in puddles. That didn’t stop me. I kept running. I found this run-down cabin in the woods. Only having one window, missing siding, and rotted. But I didn’t care. I went right in and sat on the floor curled up. All I could hear was the rain pouring and slamming onto the door.

Suddenly the rain stopped. A beam of light shined through the only window and landed right on me. The door cracked open, and a faint voice asked, “Who is in my house?” That was the Witch. “How did you get in?” As I was about to tell her who I was she walked and asked again, “How did you get in here?”

I responded, “I’m Vince, and I just walked right in the door was open.” I started to stand up again, keeping my eyes towards the floor, and said, “I’m sorry for intruding, I was leaving my mom’s funeral. I’ll get out of your hair.”

The Witch responded and told me with a gracious tone, “I understand, there is no need to leave. You can sit back down. Now tell me, what is bothering you?”

With a little hesitation, I said, “Well, I left my mom’s funeral because I was overwhelmed with losing her. I was told to say something, and I couldn’t and ran off. I’d do anything to bring her back.”

“You know I’m a Witch, right,” she said. “I could bring her back very easily.”

“Can you actually do that? That would be great. Yeah. Bring her back,” I said, confused at first.

She responded, “Yes, I can do it easily. The only thing is… there is a catch.”

As soon as I heard her say that my heart sank. I had a feeling that there would be a catch. But at that point, I thought I had nothing else to lose. I asked, “What’s the catch?”

“If you want to get your mother back, you must kill someone in return. A soul for a soul. That’s the catch.”

For some reason I wasn’t surprised. There is always a catch when it comes to something like this. I responded, “Why a soul for a soul? You’re a witch, you should be able to just bring someone back.”

“That is not how this works. If you want her back, you have to kill someone in return.”

I had to think about it. I decided to go through with it. The Witch handed me a knife and told me to use it on whoever I decided to kill. I already felt ill about doing it, but I knew it had to be done if I wanted to see mom again.

I walked towards him. With each step I took the more I was shaking. The more real this started to become to me. The knife was trembling in my hand. I was about 2 feet away from the man and I couldn’t do it. I dropped the knife and walked away. I couldn’t take a life. I know it’s what I was told to do but I couldn’t go through with it. Who am I to decide who lives or dies? I went back to the church, now just my mother and me. I said my goodbyes.

Zachary LaFever is a Cuban-American who was raised on farmland in New Jersey. He now resides in Orlando, Florida.