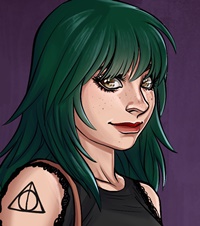 Lilith stood folding her laundry, ignoring the dampness in favor of saving herself another five dollars. A thickness hung in the air, muggy with humidity. She’d barely noticed it by then, having grown accustomed to it from the nights before when she’d spent hours there listening to music on her iPod and endlessly scrolling social media on her phone, eyes glazing over in boredom. But it couldn’t be helped. She had to have clean clothing and Aaron had taken their washer and dryer with him when they split. She couldn’t very well tell him not to. He wasn’t the one who kissed someone else.

She closed her eyes and slouched back against the rock-hard seat, trying her best to not think of the recent past and focus instead on the lyrics. Lo and behold, every song seemed to fit her situation perfectly. It was silly, she thought, thinking that every song after a breakup somehow related to her. How conceited could she be?

As a verse rang through her ears that hit a bit too close to home, she groaned and pressed pause. And then she froze.

Deep brown eyes with flecks of gold and caramel stared back at her. Inches from her face. She could feel the hot breath of this stranger warming her skin, sending shivers down her spine.

“Have you seen my cat?” came his raspy voice.

“What?” came her response, confusion overriding her frozen state of fear.

“My cat. He’s all black, with a little patch of white right…” His hand reached to her, a gruff finger tapping her chin as she recoiled. “Here.”

“No, I h-haven’t seen your cat,” she stammered.

This response only served to upset the man, whose scowl etched the smile lines of age even deeper into his skin.

“Can you help me?” he asked, his stare boring into her soul.

What was she to do? This man was clearly unwell. But what if he was some psychopath just waiting for her to drop her guard only to murder her the moment he’d gotten her alone? She didn’t want to be on the next episode of her favorite true crime podcast, and Jeffrey Dahmer was proof enough that women could be too trusting and happy to help. Yes, if he got her all alone–

And then it occurred to her… They were already alone. She’d been so lost in her own memories and her music that she hadn’t noticed the only other patron leave. As this information sank in, her heartbeat quickened, its force pounding against her chest. She stared at his mouth, his yellowed teeth gnashing as he continued speaking to her, but she couldn’t snap out of it. Couldn’t process what he was saying.

“Listen, girl!” he snapped, finally forcing her attention back to his words. “Find him. Find him by midnight or I’ll fashion you into a new pet! A loyal one, at that!”

What had he meant by that? She didn’t know, but she didn’t want to question it. Whatever she’d thought before, this settled it. This man was definitely insane. She nodded and pushed herself from the seat, finally relieved of his rancid breath. Shaking, she walked between the washers and dryers, stuttering out, “pss, pss, pss”. She didn’t have to turn back to the stranger to know he was watching her every move. She could feel it, like shards of glass embedded in her back. Twisting deeper into her skin, agonizing, as the seconds ticked. Every fleeting moment that she couldn’t locate the man’s cat was another moment closer to him making good on his word. Whatever that meant.

As the minutes passed to hours, she still couldn’t find the cat. Did it even exist? Was the old man imagining things? This was ridiculous. But still he stared after her, in the same exact position, unflinching. Unblinking. Like something from another dimension, unfazed by time.

Then she heard something.

In an instant, she’d darted off after the tiny symphony of chimes. She followed it through a door, down the hall, and into the back room. A security room, by the looks of it. Not much of one, having only a single monitor and a few camera angles. One of those cameras caught that man perfectly center frame. He was still standing exactly as she’d left him, like he was frozen. To say it was unnerving was an understatement. She felt as though he could still see her past the walls and the doors.

A rustling sound caught her attention, snapping her focus back to the task at hand. She rushed toward the sound, finding the tiny beast in quite the predicament. He was thrashing about, caught in the blinds of a cracked window. He must have been trying to escape through the window when he’d gotten himself stuck, she’d reasoned. She moved closer to help, but first she had to prevent his escape. She turned back to the boxes, ripping a cardboard flap from one and pressing it against the window. Then she returned to the cat, gingerly lifted his paw, and unraveled the string from him.

“What a mess you are, huh? That makes two of us,” she murmured.

“Speak for yourself,” came a low response.

She screeched, tossing the cat halfway across the room. Did he just speak?! She stared at the cat as he jumped effortlessly across the desk and the boxes back to the window and swiped at the cardboard, revealing the broken glass once more.

“You’d better high-tail it before he gets you, too,” the cat said, his voice low and haunting and otherworldly. And then he slipped through the window into the dark of night.

But Lilith didn’t get the chance to take his advice. She heard the tapping of bare footsteps behind her and shuddered. The stranger’s gnarled hand grasped her shoulder.

“Ya let him go. Now you’ll replace him,” the man’s voice cracked. Then her vision broke like looking through a kaleidoscope, then white noise, then there was nothing. Just black.

A brightness registered within her mind, bringing her back from whatever darkness she’d been cast into. It was sunlight, filtering into the security room through that same broken window. That much, at least, she could manage to comprehend in her dazed state. But something else was slowly coming to the forefront of her mind. There was something wrong.

Something within her felt wrong.

Her vision was different.

Everything. It was all wrong.

Looking to her reimagined features in the window’s reflection, she knew. The stranger had kept his word. And as he walked through the door, she no longer shivered. He slipped a collar around her neck and patted his gnarled fingers to her head, betwixt her ears.

Riven Wren is a non-binary author with a penchant for horror, dark fantasy, mystery, mythology, and the occult. They also enjoy drawing and previously worked as a professional illustrator.