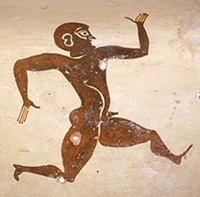 THE THIRD OR WAS IT THE SEVENTH PLAGUE

EURIPIDES PLUS ONE IN THE BARDO

H. A. Sappho is native of Los Angeles with expat time spent in Prague, Berlin, and Hanoi. His baseline interest is archetypal psychology. His work has appeared in Eunoia, About Place Journal, and in nine self-published books of poetry and prose collectively named the Puer Cycle. Currently he is at work on “Faust, Part 3.”