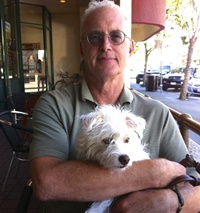 Since retiring and moving to Florida, my wife, Mary, and I have become news junkies. This is not because we have more time to fill, but because the news has acquired the fascination of a car accident playing out before our eyes. Our favorite program is NBC’s Deadline: White House, hosted by the very personable Nicole Wallace. Nicole’s honeyed smile and cheery quips make the nation’s wildfires, uncontrolled shootings and galloping Covid pandemic just a little bit easier to take. And her tagline—“don’t go anywhere!”—makes us chuckle every time.

One evening, while we were watching Nicole, I asked Mary, “Do I dare?”

“Do I dare leave my chair? I don’t want to upset her.”

“Why? What do you think will happen?”

“Worse-case scenario? She’ll flail me with a cat-of-nine tales.”

Mary shrugged. “You used to be a probation officer. I think you could fight off Nicole.”

“What if she has six strong midgets backing her up?”

Mary looked at me as though I had confessed to having lice. “That has to be the sickest fantasy I have ever heard.”

“Have I shocked you?”

“Yes, but I should have expected it. Especially when I think of the lowlife characters in all those books you’ve published.”

“My characters have moral centers,” I protested. “Even Pomeroy and Sam the Poontang Man have risen to spunky deeds.”

“I don’t think bad puns give you license to project yourself on Nicole.”

I broke my promise the very next evening when we were once again watching Nicole. After she announced a commercial break then said, “don’t go anywhere,” I looked at Mary helplessly.

“What are you afraid she’ll do this time,” groaned Mary.

“I’m afraid she’ll bind me with leather straps then make me howl like a dog.”

At that moment, our shtick had acquired an irresistible life of its own. Each evening, when we watch Dateline: White House and Nicole says, “don’t go anywhere,” I relay to Mary my fear of tortures that only a maverick deserves. The punishments Nicole has in store for me, if I absent myself from the throng, include branding, scalping, and smearing my chest with sweat bees and strawberry Jell-O. Were our country’s wounds not so self-inflicted, I might feel a little ashamed, but the news seems so karmic I have no qualms about turning it into a game.

My penchant for off-color humor did not begin with Nicole. It started when I was a San Francisco probation officer assigned to a violent offender unit. My partner, Ron Rosso, a roguish Italian, was quick to respond to a joke, and over the years we developed the rapport of a well-practiced comedy team. “Hey, Ron,” I might say while we were shaking down thugs in the notorious Tenderloin District. “That meter maid wants to get into your pants. I saw her eyeing your crotch.” Rosso might answer, “Go over and tell her she ain’t in my league. Hell, even the whores on Polk Street couldn’t handle my salami.”

Our humor, though hopelessly juvenile, helped us cope with threats posed by reckless street gangs and wild-eyed schizophrenics. It also led to the marshy birth of the protagonist of my most popular book. Were it not for Ron Rosso’s libidinous boasts, I doubt that Pomeroy, a towering rapper with a phallic fixation, would ever have taken his place among the antiheroes of print. I heard Rosso’s voice when Pomeroy made his debut by putting an ad in a swingers’ mag. “I got ten on the slack,” boasted Pomeroy. “I can handle two women at once. I don’t really wanna meet nobody—I just like to describe myself.”

My first Pomeroy story was snatched up by the editors of an online journal called Empty Sink. They could not get enough of my off-color wit, so I wrote a new Pomeroy tale every few months until I had completed a book. Since Pomeroy needed more character development, I made him an insatiable reader and had him quote from Milton or Yeats when his mischief caught up with him. Having cultivated his mind, he was also an unflinching social critic. “Steal a little and they’ll throw you in jail,” he preached. “Steal a lot, like our slave-owning founders did, and they’ll put your picture on money.”

Parodying the first sentence from Moby Dick, I titled my book Call Me Pomeroy. The book was featured on Amazon in February, 2015, and it wasn’t long before it had over a hundred customer reviews. One reviewer wrote, “Pomeroy is destined to work his way into the permanent iconography of literature. This book is an instant classic.” Another wrote, “He’s an icon we didn’t know we needed, and he’s arrived right on time.” Naturally, more cultured reviewers dismissed the book as a waste of time. Its relentless foul language and dick jokes were not meant for peerless souls, and I felt a pang of well-earned shame when they suggested I trash the book. One reviewer even went so far as to call me a philistine. She wrote, “Since Pomeroy holds nothing sacred but his overhyped, “ten-inch” phallus, I have come to conclude that James Hanna’s book is a Godless piece of work. How can anyone call it a masterpiece when it obviously serves no master?”

Clearly, I had relegated myself to the swampland of literature. Clearly, my book is a bog creature that slipped from the primal muck. But although I am irreligious, I have an unsinkable faith—a trust that my spawn is at least more abrasive than adolescent smut. Is it not the right of a scribe to lampoon the folly of his race, and has my murky alter ego not put his shoulder to the task? Were our country’s collapse more deserving of Dickens or Voltaire, I would trash my book. But as things stand, I’m not going anywhere.

James Hanna is a retired probation officer and a former fiction editor. His work has appeared in over thirty journals, including Sixfold, Crack the Spine, and The Literary Review. He is also a past contributor to Adelaide Magazine. James’ books, all of which have won awards, are available on Amazon.